AT THE beginning of the war, Cocteau was turned down by the medical board of the army, and served, more or less illegally, as an ambulance driver on the Belgian front. Some of the landscape background he observed at this time was to be utilized in the novel Thomas l’imposteur. He befriended the aviator Roland Garros, accompanied him on some of his flight missions in 1915, and dedicated to him the early poems inspired by aviation, Le Cap de bonne espérance.

At intervals during the years of 1916-1917, Cocteau entered the world of the new painters in Paris, and the world of those writers who were friends of the painters. He appeared frequently in Montparnasse with Modigliani and Apollinaire, whenever Apollinaire was on leave from the front. He became friends also with the group more closely associated with Montmartre: Max Jacob, Reverdy, André Salmon, Blaise Cendrars. This was probably the time he met Pablo Picasso, whom he introduced to Diaghileff.

Apollinaire was already wearing the light blue soldier’s uniform when Cocteau met him. There was never any trace of disagreement between the two men. Apollinaire was lavishly attentive to Cocteau, as he was to all his friends. Cocteau has especially recalled Apollinaire’s language in which unusual words would appear familiar, and familiar words would appear unusual. The laughing eyes of the poet seemed to contradict the seriousness of his face, and the priestly gesturings of his hands. Apollinaire’s small room on the boulevard Saint Germain was a museum for Cocteau where the walls were covered with the paintings of his friends: Rousseau le douanier, Marie Laurencin, and fauve and cubist paintings.

The morning of the Armistice in 1918, Picasso and Max Jacob came to 10, rue d’Anjou, where Cocteau was living with his mother. Apollinaire was gravely ill and the two friends wanted to secure the services of Cocteau’s physician. It was too late. Apollinaire died that evening. For Cocteau and for many others, Apollinaire incarnated an important literary and artistic movement in French history. He dazzled everyone by his learned remarks on esoteric topics, and his prophecies (such as his belief that the new artists owed more to Lautréamont than to Rimbaud) often spoken on his walks in Montparnasse.

Apollinaire had asked Cocteau for a poem to print on the program of the first performance of his play, Les Mamelles de Tirésias. Cocteau donated Zèbre in which he used the word rue in the sense of the verb ruer (to kick). The cubists, especially Juan Gris, believed that rue must be une rue and worried about the poem’s meaning. Cocteau told this story as an example of a noble historical decade when such a small detail was able to perturb men’s minds. Cocteau believed that Apollinaire’s magic was based upon the power of “simples,” of medicinal plants he picked along the banks of the Seine and the Rhine. Apollinaire’s bearing was that of a prelate and yet his spirit was often as innocent as that of a pious child. Both inquisitor and heretic, Apollinaire composed in his character the extremes of human susceptibilities.

When Cocteau met Raymond Radiguet for the first time in early 1919, he could hardly have guessed that this boy, still only fifteen, was to become in a few years a teacher of a new aesthetics, an example and a model for Cocteau and for other artists who quickly grew to esteem his tact and intelligence. But before long, Cocteau did recognize the genius of Radiguet, and encouraged the young writer in his efforts to contradict his age by advocating an aesthetics of simplicity, of classical clarity. Radiguet denounced the tendency of the newer writers and artists to appear original. He cleared away the accretions that had formed over traditional formulas. He followed the example of La Princesse de Cleves in the composition of his novel, Le Bal du comte d’Orgel. This novel and his first novel, Le Diable au corps, were looked upon by Jean Cocteau as extraordinary in the history of the novel, as the poems of Rimbaud were in the history of poetry.

It would be difficult to point out a direct aesthetic influence of Radiguet on Cocteau, but the example of Radiguet counted tremendously for the older man, and when Radiguet died on December 12, 1923, at the age of twenty-one, Cocteau felt deprived of the strength of a directive, bereft of a friendship based upon a constant interchange of ideas and encouragement and enthusiasms. Radiguet had taught Cocteau that an artist should lean on nothing, that the artist’s solitude is fertile and indispensable.

During the two or three years before Radiguet’s death, 1920-23, Cocteau had become a familiar figure in certain cafés in Paris where he was in the habit of passing from table to table and greeting such friends as Paul Morand, Jacques de Lacretelle, Drieu La Rochelle. Poulenc and Auric often played the piano at one of the cafés, famous for the new jazz and the new conviviality of the early 20’s. At times, even such figures as François Mauriac and Jacques Maritain were present. Both Henri Massis and Jacques Maritain, who collaborated on a new magazine, La Revue Universelle, sensed the importance and the firm moral tone of Radiguet’s Le Diable au corps, and were determined to promote the work of the very young writer.

An addiction to opium, brought on by Cocteau’s extreme grief over Radiguet’s death, necessitated a period of cure. The poet spent sixty days in the sanatorium (Thermes urbains) on the rue de Chateaubriand, and it was there Jacques Maritain paid his first visit to Cocteau. They spoke of Satie who had recently died, and of Radiguet whose second novel was about to be published. Later, at the home of Jacques and Raïssa Maritain in Meudon, Cocteau met a priest, père Charles Henrion, dressed in the white habit of the order of Pere de Foucauld. The spiritual direction of this priest and the friendship with Maritain resulted in Cocteau’s return to religious practice. The two long doctrinal letters exchanged between the two men: Lettre à Maritain and Réponse à Jean Cocteau, made public this experience. If Cocteau’s religious fervor lasted only a short while, the encounter with Maritain was of prodigious importance for him. It helped him recover from the death of his friend, it enabled him to clarify his thoughts concerning art and concerning the work of some of his contemporaries, and it initiated a new period in his life during which he was to produce two or three of his most important works: the long poem L’Ange Heurtebise, his play Orphée, the text and drawings of Opium, and finally Les Enfants terribles, written in the brief space of three weeks in March 1929.

After the first opium cure, Cocteau spent some time at Villefranche-sur-Mer, at the Hôtel Welcome. This small harbor on the Mediterranean, close to Nice, was a rendezvous for poets. There Cocteau met the stage designer Christian Bérard, and there he wrote Orphée and the series of poems entitled Opéra. Villefranche and Nice seemed to be the setting for a fable: the larger city with its gardens, flower markets and luxury hotels, its statues and its Russian colony; and Villefranche resembling the stage set of an Italian comedy, with its jazz bands, its balconies of marble and iron, its palm trees, its proximity to Monte Carlo and Vauban’s fortress, its harbor with boats from the English or American navy.

After a temporary estrangement, Cocteau and Stravinsky became reconciled in 1926, and Cocteau wrote the text of their collaborative work Oedipus-Rex. Stravinsky began composing the music when living in the section of Nice called Montboron, and Cocteau, who was in Villefranche, often visited him at that time. The oratorio was completed in May 1927, and Stravinsky himself directed the première at the Théâtre Sarah Bernhardt on May 30.

Paris, more than Villefranche, was Cocteau’s center during the twenties, when he remained close to many of the friends who had survived Apollinaire. Among those he cherished the most was Max Jacob, the poet-painter from Brittany, the son of a Jewish family who had turned Catholic, the close friend of Picasso. Cocteau was delighted by what he considered the Delphic qualities of Jacob’s poems, the play on words, the varied sources of his inspiration: the fairy stories from his native Quimper, the seraphim from Noah’s ark, the apparitions of Christ in his room on the rue Ravignan and in a movie theatre. Cocteau with deep sympathy observed the awkwardnesses of Max in his behavior, the ridiculousness of his monocle, his ingenuousness, and he applauded the elegance of his friend’s words, the skill of his writing. For Cocteau a poetic genius inhabited both Apollinaire and Max Jacob. The wound on Apollinaire’s head was the symbol of a star, and he associated it with the yellow star which Max Jacob wore over his heart in the tragic year of 1944. Picasso was the father in this trinity of modern art, Jacob the son, by his martyrdom, and Apollinaire the spirit of the new movement. 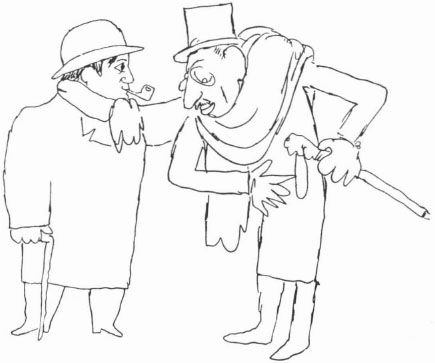 Drawing by Cocteau of Picasso and Stravinsky

From the paintings of Picasso and the poems of Jacob and Apollinaire, Cocteau inherited the important image of the circus with the sawdust floor over which the tight-rope is stretched. From these artists in particular he learned that poetrv is a precise art, as difficult to execute as a circus stunt of acrobatics. He learned that poetry is the result of scrupulous search, a way of revealing and transcending despair. It was a lesson for Cocteau on the dangers of classification, on the need to live in accordance with a disconcerting agility. The miracle of Cocteau’s example is that he never wasted or fragmented himself. Everything counted: his drawings and his poems, the direction of plays, the creation of archetypal films, chapel frescoes, and ballets. His existence was energy, and it was never declamatory. He was detached from his public, but he was accessible to human suffering.

A false legend made Cocteau into an essentially worldly figure, a man photographed at social functions and interviewed by journalists. This aspect of Cocteau’s public life counted very little by comparison with his life of service, his generosity, the simplicity of his manners, the vigilance and attentiveness of his nature, the affection he showed to so many. Even at those moments during the early years of his career when he seemed tempted by the frivolity of worldliness, his character was already dominated by a goodness of heart, by an indulgent understanding of human nature. By his example, he preached kindness. He learned to arrest his feelings just before any impulse to blame could arise. Man rarely has knowledge of sufficient reasons for which to blame another human being. We do not know enough concerning the inner life of a fellow man that would permit us to castigate or reprove. We do not know what is inside a house, what is under a roof, what bonds or tensions exist between human beings. Cocteau’s qualities of friendliness and sympathy are also evident in his work because as an artist he joined the unusual with the beautiful, the traditional with the new. He tested every form of imprudence, and often discovered that imprudence was a mask for wisdom.