Our survey was conducted in the Boston, New York, and Chicago areas in May 1986. It entailed 22 in-depth oral interviews with people of varying races, sexes, and classes, and 153 questionnaires. Participants in the oral interviews were solicited from the audiences at movie theaters, as well as from the parents of students at Northeastern University in Boston, a school which is attended primarily by working and middle class students. A number of the participants in the interviews were working-class black women, and about half were corporate office workers of varying levels. We also spoke to several white middle-class housewives and to a few upper class Westchester County residents. It was more difficult to obtain interviews with white working class men, although we fared better in our written survey, which we distributed to classes of white and black students at Northeastern who were assigned to give it to adults. Ten students in one of our classes and ten in a colleague’s completed the survey. We also distributed it to office workers, and obtained about fifty responses by distributing it at movie theaters in upper-class areas of Boston. Of the 153 respondents, 50.7% were men, and 49.3% were women; 14% were black, 82% white, and 4% Asian. The political positions of the respondents were distributed in the following way: Reactionary 2%, Conservative 27%, Moderate 35%, Liberal 29%, and Radical 2%. The family backgrounds of the participants varied in the following way: Working and lower middle class 26%, middle class 47%, and upper middle class 27%. The income of the respondents was distributed in the following way: 34% under $30,000 a year, 27% $30,000 to $40,000, 9% $40,000 to $50,000, and 31% over $50,000. Our sample reflected the opinions that recent polls have suggested are the standard opinions for most Americans. That is, they mix liberalism on certain social issues with conservatism on others. For example, 79% favored more punishment for criminals, while 67% opposed reductions in welfare. Similarly, the large majority favored the ERA, but 58% favored the use of force to deal with enemies abroad. For our own interest, we asked two questions which other polls do not ask. When asked if they feel the “American economic system is fair and just,” 61% of our sample said no. When asked if they would prefer a society in which wealth was distributed equally, 50% said they would.

The poll was constructed with the help of Pat Golden, a sociologist at Northeastern University who specializes in data research. Although a sample of fifty is assumed to produce “significant” results, our poll can only be taken as a partial indicator, not as a statement about all Americans. A poll that would legitimately lay claim to universality would require a much more selective approach to the construction of the sample. Our aims have been altogether more limited. We simply wanted to get a sense of how a random selection of people were processing movies. The range of answers given to our questions in the interviews probably cover much of the range that would be given by a wider or more scientifically determined sample. A wider or more scientific sample might have given rise to different percentages, but we feel that the general proportions of the percentages would likely remain the same. Nevertheless, it is clear that more work of this sort needs to be done on Hollywood film, and we present our poll as an effort in this direction.

We did this research in full awareness of all the pitfalls entailed in engaging in such work. We do not claim that surveys provide direct access to information concerning the effects of films on audiences or the realities of audience political consciousness. Questions create their own responses to a certain degree, and an audience may not have thought of a film at all in the manner elicited by a question until that question was posed. Moreover, written polls are not ideal ways of eliciting responses, and the role of the unconscious is difficult to factor into our results. Cinematic perception and political consciousness are highly mediated and differentiated; unconscious feelings or effects may be the most important and the least accessible. Free association in interviews can draw out certain material, and we found that people sometimes gave quite distinct responses in the interviews than they did on the poll. Very few people, for example, in the interviews volunteered that they thought the representation of foreigners in Raiders of the Lost Ark was stereotypical, but when the option was presented on the written poll, 90% chose it. If open-ended questions in the interviews elicit a greater breadth of response, they also necessarily preclude certain responses that people might not have thought of themselves. No satisfactory method of survey analysis and interpretation has been devised, and more work remains to be done using in-depth interviews particularly. In addition, further research into audience responses would have to rely on more sophisticated surveys than our own.

On the whole, we found that people are quite mixed in their responses to films. They are capable of holding quite divergent political views at once, and of the same film they can make both conservative and liberal statements. We have come away from this work convinced that most people’s values are pre-political; that is, they are not conceptualized as either conservative or liberal or whatever. Many people are not even certain what those terms mean. And some label liberal values as right-wing because they entail restraint, while they call other things radical because they are individualist and rebellious.

We also found that different social groups view the same film quite differently. Perhaps the most noticeable of these divergences occurred in black people’s perceptions of films which white people did not find problematic. In our interviews with blacks, we found that blacks noticed the presence or absence of representations of the black experience much more so than whites. And, as one might expect, they perceived problems with stereotypes which whites tended to ignore. The same is true of course regarding women’s and working-class people’s experiences. Women’s perceptions on women’s issues diverged from men’s, and as we have noted, income and class position influences at least certain responses. We include some tables below which give a more concrete sense of what we are describing.

For example, our first table refers to the question, “Is Kramer vs. Kramer a negative depiction of an independent woman?” The first figure under “Male” is 16, which indicates that 16 men felt it was negative. The equivalent number under the adjacent female column is 28. The percentage on the next line indicates that the 16 men represent 36.4% of those (both male and female) who thought the film depicted independent women negatively while the 28 women represent 63.6% of those (again both male and female) choosing this option. The next figure down in the first column is 30.2%, which means that the 16 men represent 30.2% of all the male respondents. The equivalent figure for the 28 women is 45.2%, since 34 women or 54.8% of the female sample felt the film did not constitute a negative depiction. Thus, while more of the women thought it was not negative, women still outnumbered men in characterizing the depiction as negative (28 to 16 or almost 64% of those choosing this response).

Table 1. Do you think Kramer vs. Kramer took a negative position toward women who want to be independent?

The next table indicates that a higher percentage of blacks thought Saturday Night Fever offered a false hope as opposed to a real possibility.

And the next indicates that a higher percentage of those making over $30,000 thought it represented a real possibility.

Table 3. Do you think the movie offers a false hope or a real possibility?

The following table addresses the same question from the perspective of class. Notice that the percentages for “false hope” decline as one climbs the class ladder, while those for “real possibility” rise.

Table 4. Do you think the movie offers a false hope or a real possibility?

And, finally, the same question from the point of view of political preference.

Table 5. Do you think the movie offers a false hope or a real possibility?

Table 6. Do you feel the movie deliberately tries to make the working class world look like a dead end?

Gender is a factor in many instances. This table indicates that women in our survey were more opposed to Dirty Harry’s methods.

Table 7. Do you think Dirty Harry represents the right way to solve crime?

The following two tables suggest that people from upper middle class backgrounds and people who make over $30,000 a year are more likely to think that a disaster film like Towering Inferno is about one bad sector of business than about business in general.

Table 8. Do you think the corrupt construction people (in Towering Inferno) represent (a) one bad sector of business but not all business or (b) the way most big business operates? 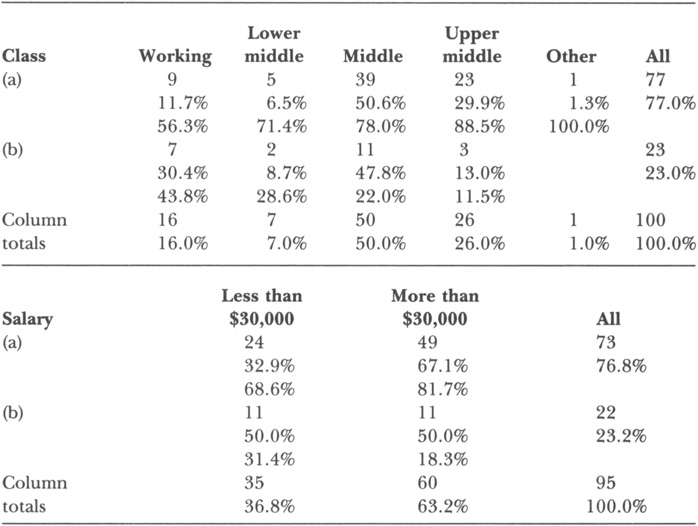 The table below suggests that conservatives more than moderates or liberals are likely to perceive Star Wars as supporting the conservative ideal of peace through strength.

Table 9. Do you think the movie is in favor of the conservative idea of “peace through military strength”?

The next tables concern social issues. Tables 10 and 11 indicate that blacks and people earning less than thirty thousand are more likely to prefer an egalitarian society. 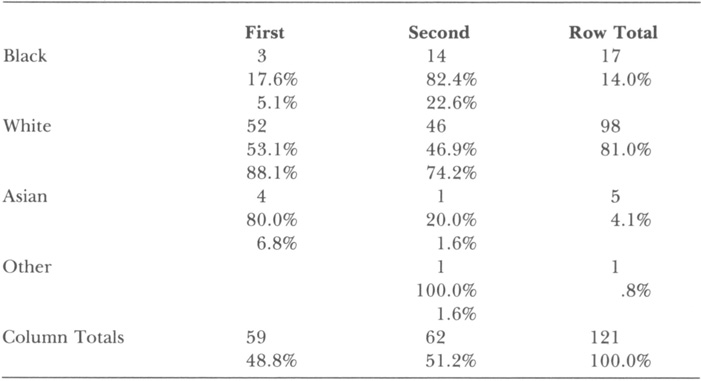 The final two tables concern the question of whether or not the American economic system is fair and just. Notice that working-class and black participants chose “no” more often than white or upper-class respondents.

Table 12. Do you think the American economic system is fair and just? 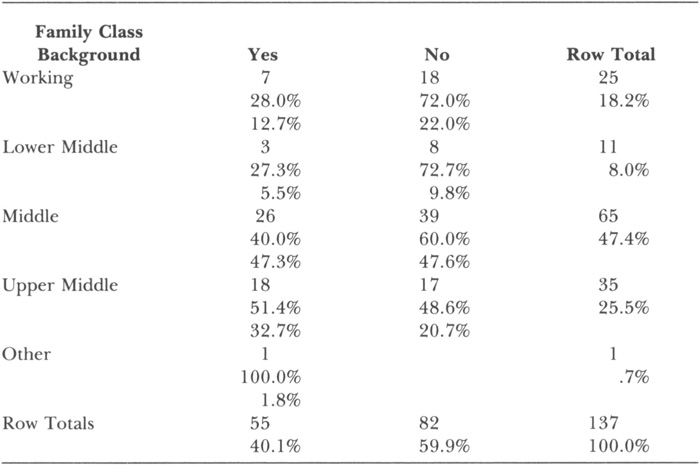 Table 13. Do you think the American economic system is fair and just?