THEME FROM THE FOURTH SYMPHONY

Although the key signature of this Theme has neither sharps nor flats, it is not the key of C major but of A minor, which is the relative minor of C major. Relative minor keys are found three half steps below major keys and have the same signature.

To convert this minor melody to a major melody, all you need do is raise the third degree a half step from C to C#. This also works in reverse: you have only to lower the third degree of a major five-finger position or triad to make it minor.

Playing a five-finger position first, then a triad, change: 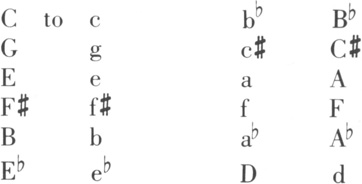 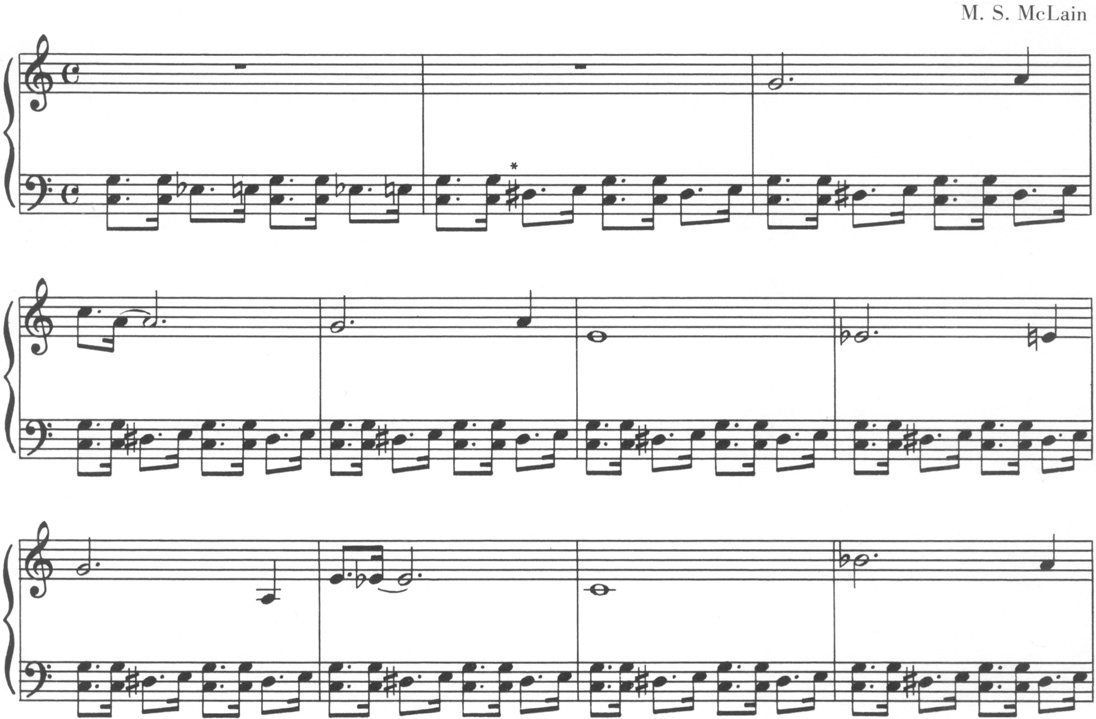 *There are two methods of writing chromatic scales. The first is to combine the tones of the major and minor scales on any given tonic, raise the fourth degree and lower the second degree. The second method is to raise (sharp or natural) black keys or non-scale tones on the way up and lower (flat or natural) them on the way down.

To establish the minor-major element in this composition, the first method has been used in the left -hand part of the first measure. After that, however, the second method has been employed because three accidentals could thereby be eliminated, thus presenting a simpler picture to the eye.

The V7 chord is exactly the same in minor as in major, but since its middle note is approached from a location a half step lower in minor than in major, the middle voice must move up a whole step, rather than a half step, to compensate.

Warmup VI will make this clear. Play it through all major and minor keys, hands separately first, then hands together. When you can play the warmup fluently, play it with eyes closed or hands covered.

Unlike the V7 chord, which is the same in both major and minor, the subdominant triad follows the mode of the tonic and so will be slightly different in minor mode. In this case the lowest tone is retained, the third moves up a whole step, and the fifth moves up a half step.

Play Warmup VII in accordance with directions for Warmup VI.

When you understand the I IV I and I V7 I patterns in both major and minor, you may combine them into a I IV I V7I, i iv i V7 i sequence and play it through all keys. This will be:

The next melody is in minor mode and the harmony is indicated. Play a chord on the first and second counts, allowing a quarter rest for the third count. (This type of accompaniment is more rhythmical and less monotonous than the plodding, one-chord-to-the-count variety.)

Play the melody with the left hand as well as with the right hand.

This melody covers a more extensive range than the other melodies you have been playing, so, for the present, do not transpose it.

Next to the fifth, the most important interval for the pianist to feel is the octave. Slow octaves are usually played by lifting the forearm from the elbow and keeping the wrist immobile. Lift the hand two or three inches above the keyboard for each stroke and keep the octave framed as you did with the triads. Never permit your hand to collapse or deviate from the octave span.

Rapid octaves are played with a relaxed wrist stroke, always keeping the octaves framed. A pianist’s wrists can become very tired if he is not used to playing octaves or lets himself grow tense. For this reason, he should use any notes of relatively longer duration—in this case the quarter notes—as resting points, while still keeping the octave framed.

Play Warmup X chromatically up and down one octave. Do not continue after your wrist becomes tired, but rest one hand while playing with the other. Your endurance will increase gradually.

The octaves on the keyboard and Grand Staff are designated as follows:

Listen carefully as you play chords and single-note sequences in each octave so that you will be able to recognize the location of music you hear.

These exercises will help your wrist to be more flexible in octave playing. You may do them at the keyboard, on a table’s edge, or on any surface which is approximately on a level with your elbow.

A. Assume an octave span on the real or imaginary keys, then—always keeping your thumb and fifth finger firmly in place—drop your wrist as far down as it will go and raise it as high as it will go. Do this eight times.

B. Again assume the octave span, your wrist on a level with the back of your hand. This time keep your forearm in an unchanged position, but throw your hand back as far as it will go—still framed to the octave span. Do this in a moderate tempo eight times.

CHORALE
from The Passion According to St. Matthew
(A Duet for Four Hands)

SONG OF THE VOLGA BOATMEN 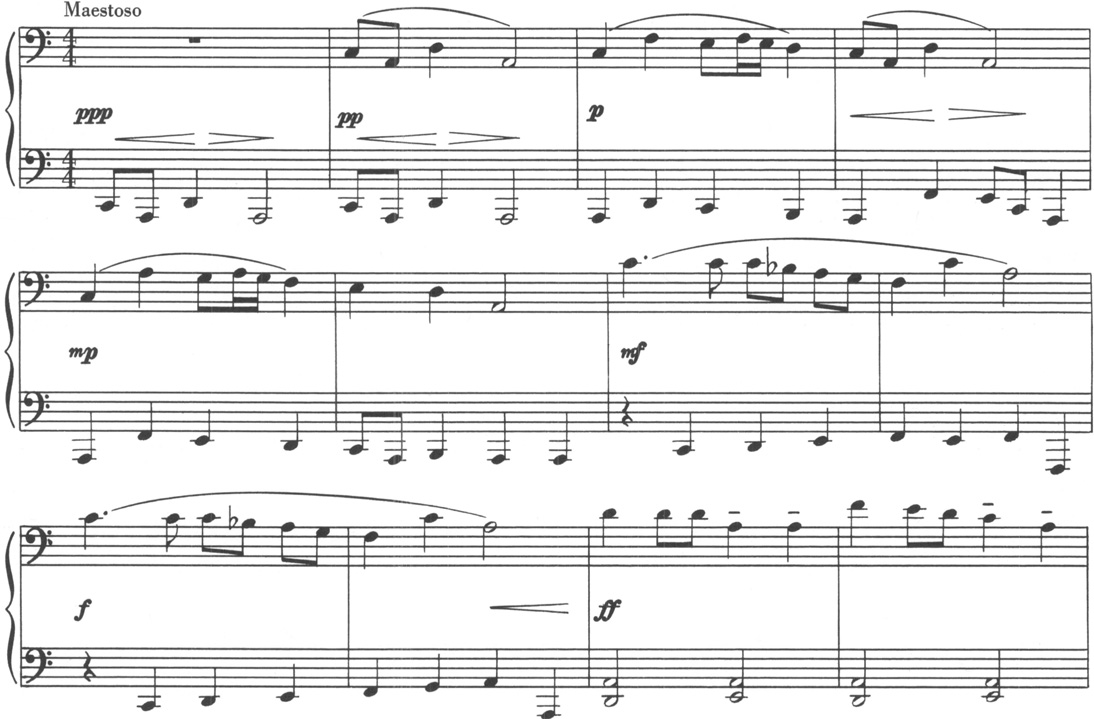 Many people are less familiar with the notes of the bass staff than with those of the treble staff. The next three exercises should help you find your way with greater ease.

The next exercises should be played with covered hands. It is quite useless to say firmly that you will not look and therefore need not cover your hands; before you know what is happening your eyes will sneak a peek. Avoid this wear and tear on your willpower and cover your hands. The best way to do this is with a newspaper opened full width, then folded top to bottom. The paper can be anchored behind the keyboard cover or secured on the music rack by a book or two. In any case, let the paper hang down over your hands and don’t peek underneath. Get your bearings by feeling the groups of two and three black keys. The newspaper, folded properly, will cover more than four octaves.

These pieces are designed to help you gain keyboard feel, and you should learn to play them without looking at your hands.

In Pentatonia, only black keys are used. If you place the fingers of both hands over the keys which are to be played you will not have to look at your hands again.

The feel of the octave span in the left hand is an important feature of Club Zara. To maintain contact with this interval, give up the usual five-finger position and play the first note of the piece with the third finger. In the tenth measure, pass the 2nd finger of your left hand over the thumb for one note. In the ninth measure the interval, B♮ to A♭, between the fourth and third fingers of your right hand, may feel awkward, but later, when you have scales with standard fingering, you will encounter this same interval (an augmented second) in the harmonic form of the minor scale, and it will help if you are already familiar with the feel of it. The same interval occurs in the left hand two measures later. Needless to say, this should be practiced hands separately before being played hands together.

In the Old French Carol, the right hand employs a number of the fingering devices you have learned. The left hand, however, is framed to a triad throughout the entire piece, only changing to adjust to the slight modifications of shape caused by black keys. It moves away from, then back to, the initial chord—first a whole tone, then two whole tones, and so on, each move covering a greater distance. You must learn to calculate these hand shifts by feel rather than by looking. This will not be difficult if you analyze what is involved in each shift and practice it separately:

Second shift: G minor to E♭ major. This is easy because in the G minor triad you already have two tones of the E♭ major triad. Just before you are ready to make the shift, lift your third and first fingers (still holding your fifth finger down) and place them over the G and B♭. (Your little finger, still on G, is your guide.) Then move the little finger—by feel—down to E♭ and strike the chord. On the way back, reverse the process, bringing the fifth finger up to G, then sliding 3 and 1 to B♭ and D.

Third shift: G minor to D minor. When you are ready to shift, move your thumb down to touch (but not strike) A. You can test this by touching your little finger with your thumb, then locating the neighboring white key above. With your thumb on A, move 5 and 3 down to frame a white-key triad on D. On the return, bring your little finger up to the key just below your thumb to locate G, and shift 3 and 1 up to frame the G minor triad. Another way to reach the D minor triad from a G minor triad is to move your little finger down to D, identifying it by the feel of the octave span between it and the thumb, which is still on the higher D. With 5 on the lower D, move 3 and 1 down to F and A, which you will identify by the feel of the triad. On the return, your thumb will reach up to establish the octave span from D to D, and 5 and 3 will move up to frame the triad.

Fourth shift: G minor to C minor. Move your thumb to G, already occupied by the fifth finger, and shift 5 and 3 to C and E♭. Remember to feel for a black key with your third finger. To return, put your fifth finger on G in place of your thumb and frame the G minor triad with 3 and 1.

The first phrase of the Maypole Dance keeps the right hand in one five-finger position, so you can give most of your attention to the left hand. The left-hand thumb acts as “anchor man” and repeats the same note, but the fifth finger, after starting on the tonic, reaches out to explore two new keys at increasing distances from the thumb, then returns. These new keys—A# and G#—, being black, are easy to locate. In the next two measures the fifth finger stays “on location” but the thumb goes exploring. Here again, the black keys help it to find its way. In the second phrase the right hand maintains a five-finger position for a measure and a half, then shifts to another five-finger position. An octave span returns it to the first five-finger position. The right-hand part can claim most of your attention because the left hand is merely seesawing back and forth on one octave span.

All of this is cumbersome to explain but quite easy to do. You will be surprised at how quickly and securely you will be able to find your way over the keyboard without looking. You will begin to reap “tangible” dividends from the effort you invested in learning to frame triads and octaves. 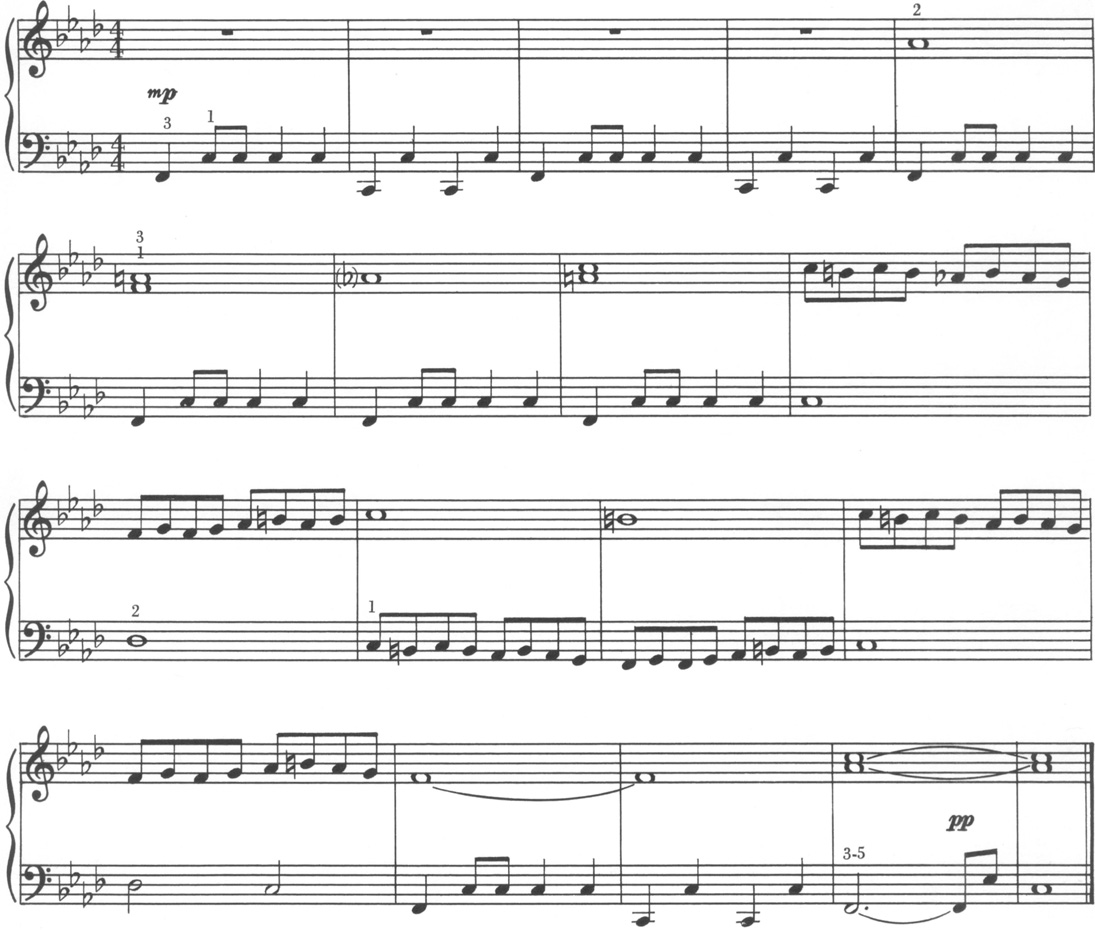 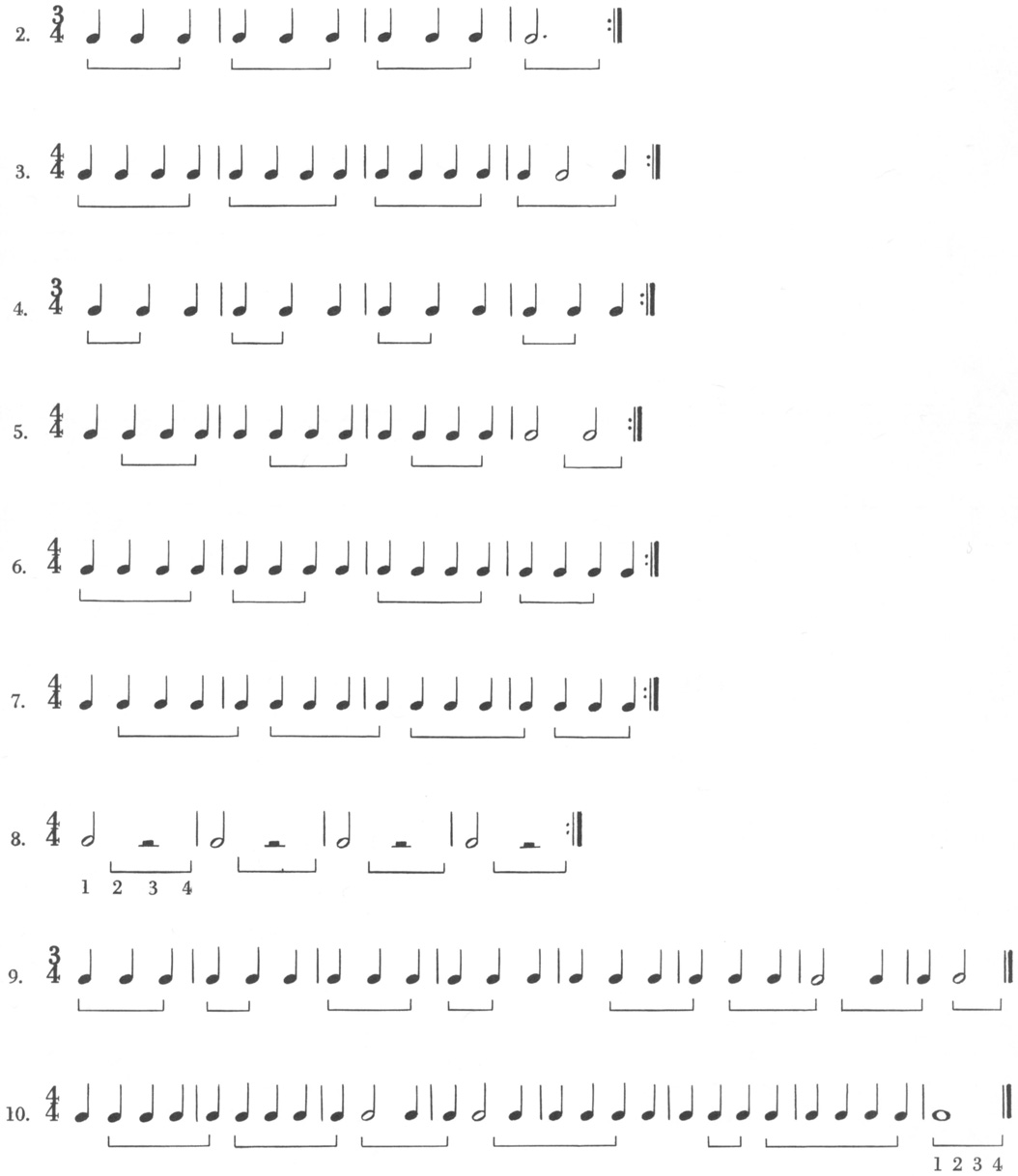 Your new vocabulary will include the IV chord. Although you will still restrict your melodies to chord tones, you may include two tonics, an octave apart, and you may use minor mode.

The directions in Chapter 3 regarding meters and keys apply equally to work in this chapter.

Figures 36 and 37 will suggest many other possibilities to you.

*The B (2nd degree of the five-finger position), although omitted in this form of the V7 chord, is a true part of the chord and so may be used in the melody.