If you place your hand over any five-finger position and strike the first, third, and fifth keys simultaneously you will have played a chord. Chords are of several kinds. This one is a major triad. Play major triads on D♭, F#, B, E♭, G, A♭, C#, B♭, and E.

The word “triad” means “three notes,” and because these triads are constructed on the first degree of the scale they are called I chords, or tonic triads. Play them hands separately, then hands together, one octave apart.

We can now expand our first warmup into the following:

You will notice that the successive tones of the five-finger position are written as eighth notes and therefore move twice as fast as the quarter notes in Warmup I.

Play this warmup through all keys, hands separately, then hands together, if you can.

In Western music the interval of the fifth (1 to 5) is important for many reasons, but the reason which immediately concerns us is that it is useful in helping to establish “keyboard feel,” mentioned before in connection with sight-reading.

With your right hand, play a C major triad. Now, without letting your fingers deviate in the slightest, lift your hand high above the keyboard—two or three feet—then bring it down on the same C major triad and see if you have been able to maintain the exact triad position. Do the same with the triads on G and on F. Now try it with your left hand on the same keys. When you have mastered this, practice on the triads of D, A, E, and B majors. One or two black keys will change the “topography” of the triad a bit. After this, build triads on the black keys and try to hold your exact triad position as your hand travels up and down. This is called framing a chord and will be of great use to you, for by fixing the precise shape and sensation of the triad in your “hand’s memory” you are mastering not only the feel of the fifth but of the third (1 to 3, or 3 to 5) as well.

Anyone who has studied theory or harmony will readily identify the pedigree of our next chord. For our present purpose, however, it is best approached by rote. It is a dominant seventh chord, indicated by the symbol V7 and found as follows: play a G major triad with your right hand; now move the lowest voice, or part (played by your thumb), down a half step from G to F#; move the middle voice up a half step to C; retain the highest tone—the fifth. Strike the F#, C, and D together using your 1st, 4th, and 5th fingers, and you will have just played a V7 chord.

When you play the chord with your left hand you will finger it with 5, 2, 1. Because it is a dissonant chord you will generally want to follow it with a tonic triad, or in technical language, resolve it.

Play the I V7 I pattern in all major keys, first hands separately, then hands together.

When you can play the I V7 I pattern easily in any key you are ready to harmonize the songs you learned in Chapter 1. All of them can be harmonized with the two chords in your repertory but you will want to do some experimenting to determine which chord sounds best where. In general, a chord sounds best on a strong beat, especially if the chord introduces a change in harmony, but you do not have to limit your chording to strong beats, nor do you have to alternate your two chords. After you have tested several harmonizations, indicate in the music the one you think best by writing the chord symbol (I or V7) in pencil under the appropriate note.

Here are two more melodies to be harmonized with I and V7. Play the melody with each hand, first in the air, then on the keyboard, harmonizing with the other hand. After you have mastered the songs in the keys given, transpose them to all other keys.

(For additional songs to play, see Hearsay and Other Ear Work in this and the following chapters.)

In this chapter’s sight-reading you will proceed as before, playing with one hand and covering up the measure about to be played with your pacer, only now you will sometimes be asked to observe and retain in your mind’s eye two notes since the pacer will always cover an entire measure. Again, note carefully the clef, key signature, time signature, and contents of first measures. Once you have begun playing, the important things to watch for are direction (progression of notes up or down), and whether the notes move stepwise or chordwise. For example, you should be able to recognize immediately that the notes in Figure 8 progress upward and in a stepwise pattern, while the notes in Figure 9 move downward and chordwise.

Even if you are not sure of the identity of some of the notes, recognizing that a series of notes is proceeding stepwise from a note which you do know will help you to find them. (By “step-wise” we mean, of course, in a series of neighboring scale degrees.)

In the same way, recognizing that notes skip one or more lines or spaces will indicate that these are chord-tones. While this can become more complicated because of the greater variety of intervals involved, you are not likely to find in the simple music which now occupies you any melodic intervals other than those of the chords with which you are familiar.

Do not forget to count out loud!

THEME FROM FINALE OF NINTH SYMPHONY

Here is your first two-hand piece. The melody falls into a five-finger position and the chords are the familiar I and V7. You can transpose it quite easily.

LYRIC PIECE NO. I

Play and tap the rhythm drills as directed in Chapter I. 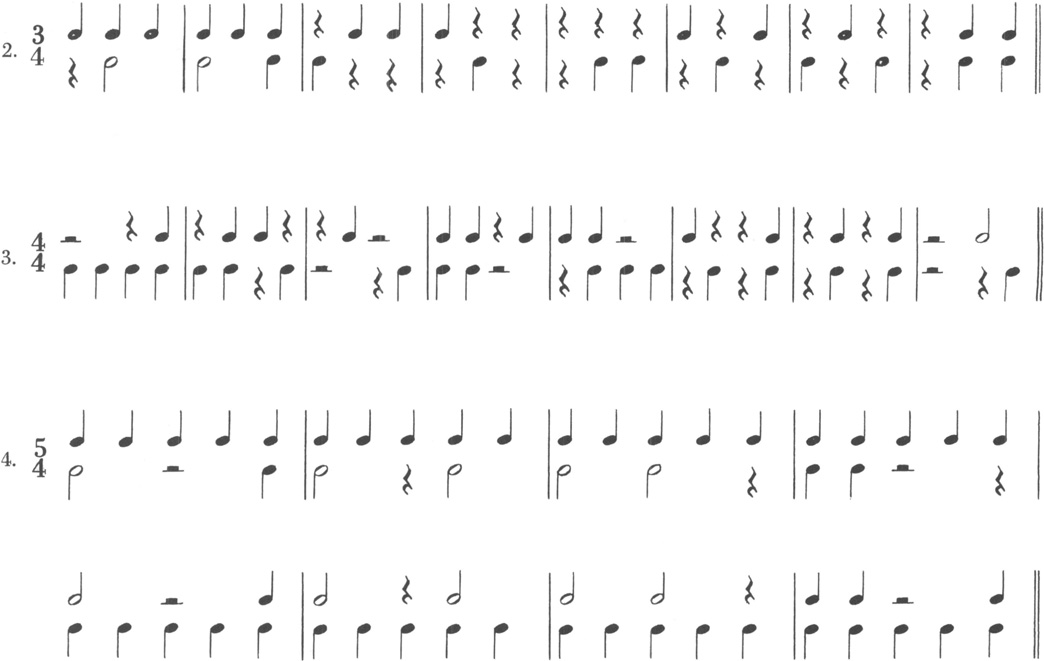 At one time the ability to improvise, or extemporize, was considered an essential part of the equipment of any keyboard virtuoso, and his public performances often included demonstrations of his skill. This seldom is done today; but if it is becoming a lost art on the glamour circuit, it is becoming increasingly needful in functional music. Most modern and interpretive dance is accompanied by improvised music; children in kindergarten and primary grades have all manner of activities which are coupled with and dependent upon improvised music; improvisation has long been a part of progressive jazz and Dixieland, and recently composers in more sedate circles have been experimenting with group improvisation.

Despite this last circumstance, improvisation is not suited to large-class activity although it can be handled to advantage in small classes. In any case, practice is essential. Even if you have no creative talent, you can still learn to improvise.

time. Use quarter note and half note values, and dotted rhythms if you wish. A pattern such as Figure 10 is not too simple.

The important thing is to complete the planned number of measures, to know where you are in each measure, and to keep a steady tempo.

2. Invent and clap three or four more two-measure sequences in

the most important consideration is to clap the designated number of measures. If you wish, you may try irregular phrases of five or six measures, but you must know at all times which measure you are in, and you must complete the phrase with the number of measures projected. Do not attempt complicated rhythms.

5. Using a I chord in any key, play a rhythmic series of four measures as in Figure 11.

Melodic improvisation. With each hand alone, make up rhythmic phrases using the triad tones individually as in Figure 12. Again, do this in different keys and meters.

Two-hand improvisation. 1. Play a tonic chord in the bass at the beginning of each measure to accompany a triad-tone melody in the right hand.

2. When you can manage four measures easily, improvise eight-measure periods of two phrases each as suggested by Figure 14 and Figure 15.

3. Play chords with the right hand, melody with the left hand, as in Figure 15.

You will observe that in Figures 14 and 15 the second phrase is almost exactly like the first phrase. This is not a requirement, but it is a simple and frequently used way of providing structural balance. If the last note of the first phrase is a tone other than the tonic, and the last note of the second phrase the tonic, a kind of question-and-answer effect results. The device can be modified so that only the beginning of each phrase is alike.

For the improviser, this technique has the merit of making one idea do the work of two.