When you are ready to try two octaves, remember that your right thumb on the tonic of the descending scale has taken the place of your little finger and so must be followed by your fourth finger. The reverse of this is true for your left hand in the ascending scale.

going up, while in the scale of C# major it will play

. Your other discovery will relate to thumbs: in the Group II scales they come together on the tonic but they do not come together in the middle of the octave. This is one reason these scales are more difficult than those in Group I where the thumbs strike simultaneously.

Practice the scales hands separately and thoughtfully. When you put the hands together, count two on each scale degree.

Arpeggios, or arpeggi (the Italian plural) consist of chord tones played successively rather than simultaneously. They are much easier to play than scales. The most important thing to remember is that the passing of the thumb under the hand or the hand over the thumb must be performed with perfect legato; no break is to be tolerated. Also, the hand, wrist, and arm must be kept level, with only a lateral or sidewise motion of the wrist. Do not try to see where you are putting your thumb when you pass it under.

The general rule is: if starting on a black key, put thumbs on the white key; if there is no white key, play as if all were white.

VELOCITY STUDY FOR THE RIGHT HAND

VELOCITY STUDY FOR THE LEFT HAND

SCALE STUDY FOR THE RIGHT HAND 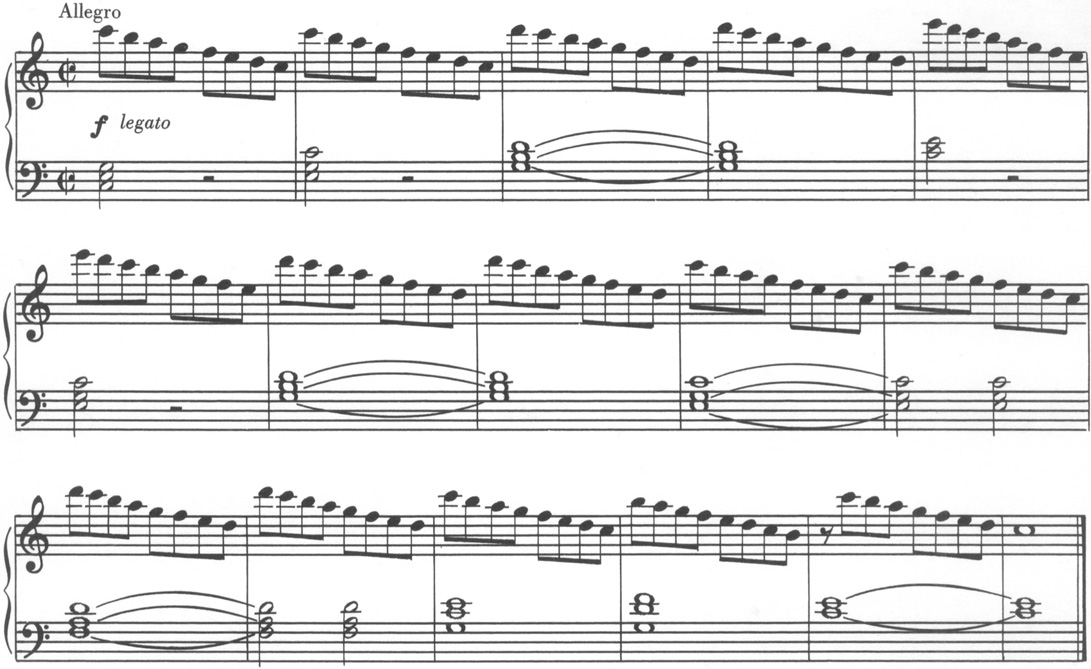 SCALE STUDY FOR THE LEFT HAND

Warmup XIX features the kind of thumb-under-hand and hand-over-thumb action found in arpeggios. Play it through all keys. 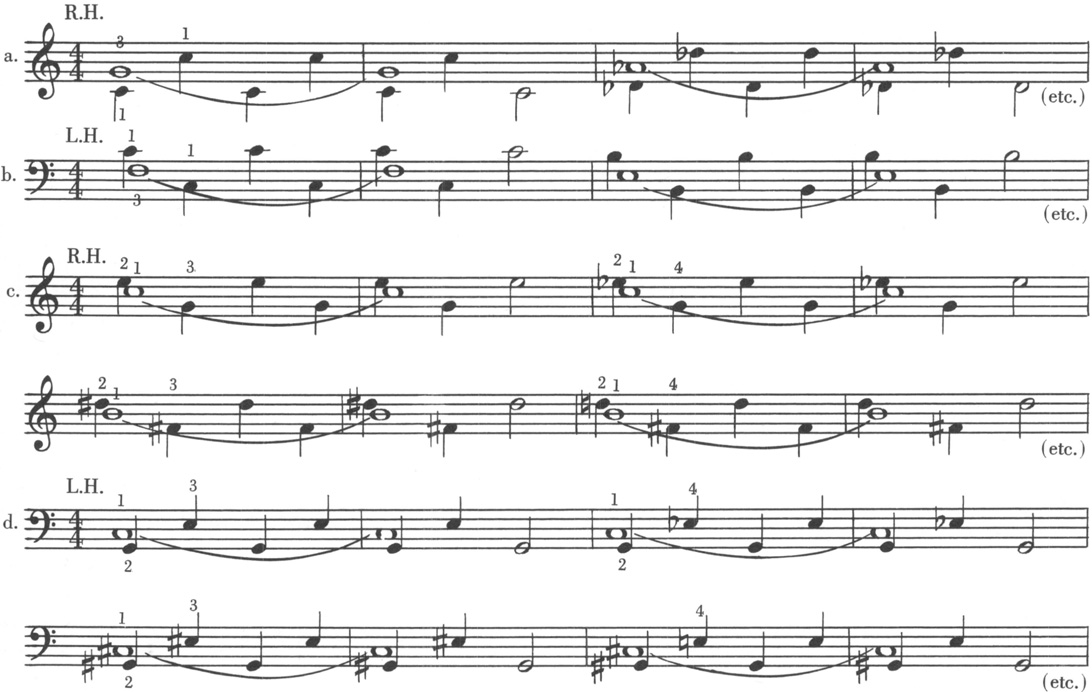 Perpetual Motion will help strengthen your fourth and fifth fingers and will also accustom you to the feeling of the augmented second between the sixth and seventh degrees of the harmonic minor scale.

The triads on I, IV, and V which you have been using are called primary triads. You can also build triads on other degrees of the scale and these are called secondary triads. In a major key, secondary triads will all be minor except that on the leading tone, which will be diminished (composed of two minor thirds). In a minor key there is a second diminished triad and also an augmented triad because the harmonic form of the minor is customarily used.

Observe that in Figure 99 the tone which is common to the ii and V chords (B, in the key of A) is not kept in the same voice. In strict four-part harmony this is customary in the progression ii V which is governed by the formulation: If there is no common tone or if the common tone is not kept in the same voice, lead the upper three voices in contrary motion to an ascending bass. This rule will, of course, also govern the progression IV V, iii IV, and ii I

(no common tone) in Figures 100, 101, and 102. The rule has been observed in the examples, but there are sometimes circumstances when the melody requires that the common tone be kept, just as in other contexts it must sometimes be given up—against the rule—for the sake of the melody. Despite this one restriction, note how many ways there are in which the bass may move.

Parallel fifths and octaves, while frequently encountered in the works of the best composers, are prohibited by the rules of strict harmony and counterpoint which evolved from early vocal writing and postulate an independent though integrated function for each voice. This does not apply to much orchestral and piano music where parts are often doubled at the octave for greater emphasis and where, indeed, formal four-part writing may have been superseded by other compositional considerations.

Ways in which the left hand alone can realize the same patterns are shown in Figures 104, 105, 106, and 107. Inversions, of course, make their appearance with this form of accompaniment. 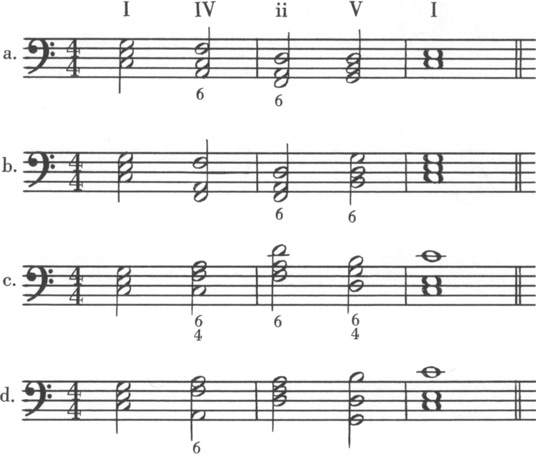 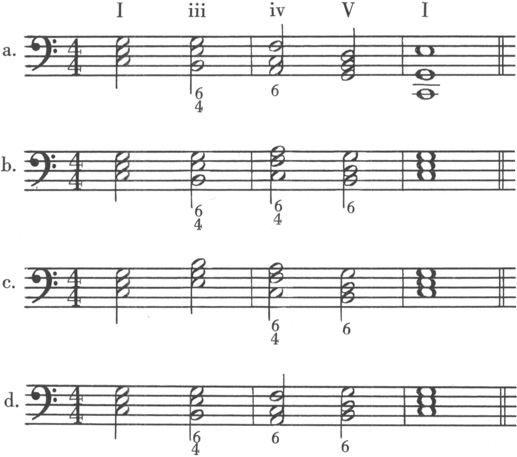 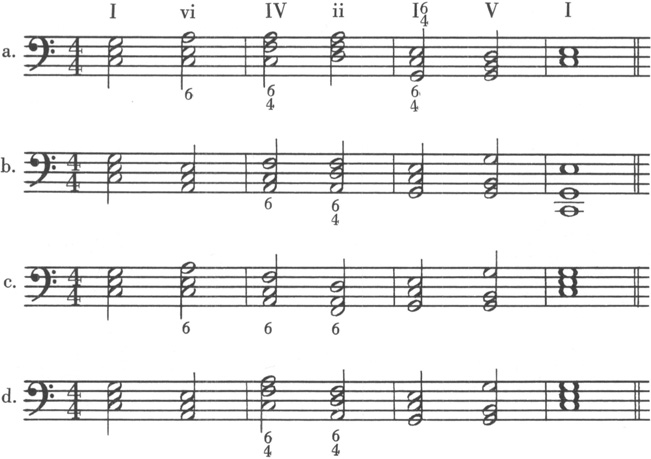 One pattern which incorporates two of these secondary triads is familiar to everyone as “We Want Ice Cream,” and consists of I vi ii V with the triads all in first position, or root position if played by the left hand.

This seems guileless enough but see what can happen when it is divided between the hands and paired with an amusing rhythm.

Many popular songs have been based on this harmonic pattern. Can you identify any of them? Try to compose a melody of your own, to be played by the primo player while the secondo plays the accompaniment. If you wish to play both melody and accompaniment yourself, you can play the chords in their simple form (Figure 108) with your left hand. Other arrangements of this same chord sequence are shown in Figure 110.

You may ask about the “We Want Ice Cream” pattern and its flagrant use of parallel (or consecutive) fifths. One answer is that this little cliché is not very serious music but is more of a fun thing, analogous to the colloquial, slang, or baby phrases which we use but enclose in quotation marks to show that we know they are ungrammatical. Another answer is that the parallel fifths have their own melodic line and are part of the intended effect.

You may then ask: how does one know when to follow the rules and when to take off on a freer course? And, if one is to bypass the rules, why learn them in the first place? Proper enough questions, to which we answer: in formal four-part harmony exercises, follow the rules. Learning to operate within these limitations is the very best way in which to acquire skill in handling several parts simultaneously. Far from blighting any creative talent you may possess, adherence to this discipline will develop your ingenuity and resourcefulness. When you know the rules and can move skillfully within their framework, you are at liberty to break or discard them—but always from choice, not ignorance or ineptitude, and always with your good musical taste acting as mentor.

In this connection it should be understood that managing the total accompaniment with the left hand alone is quite different from dividing four voices between two hands, and requires a measure of freedom in the matter of voice leading. The limitations inherent in one hand and three (more or less) tones make certain regulations impracticable at the keyboard; for example, the rule about contrary motion when there is no common tone, or keeping the common tone in the same voice. Occasionally the rules can be observed, but they should not be allowed to cause the accompaniment to become dull and inflexible.

As guidelines in this greater freedom, the following precepts will be helpful.

Songs to Harmonize and Transpose

Melodies may often be harmonized in more than one way. The two or more figures under some melody tones are suggestions for different harmonizations of those tones. Notes or measures which are unfigured you must work out for yourself.

BLOW THE MAN DOWN

The first of these secondo accompaniments consists of components which may be combined to accompany any march-type tune such as London Bridge, This Old Man, or Little Minka. The three upper voices may start from any convenient position. Observe that in the treatment of the IV chord the third is introduced in the bass just as it was in the Venerable Classic. Can you think of other songs or melodies which could appropriately be accompanied in this way?

Do not overlook melodies in

The second of the accompaniments is in a Spanish rhythm. Again, the components are given for you to adapt to your requirements. Construct an accompaniment to Warmup XIV b (Chapter 6), using this rhythm with appropriate harmonies. You may also play the cadences and chord patterns through all keys using this rhythm.

Warmup XXIII is a double third study. The pairs of notes must be struck precisely together so that they sound as one impact. The left hand may be played one or two octaves lower. Practice hands separately first until you are sure the thirds are in unison. Play each measure four times, and play the warmup in every major and minor key.

A major third occurring at the end of a composition in minor mode is called a tierce de Picardie or Picardy third.

Before playing the first sight-reading study, re-read the remarks on legato and staccato which precede Lyric Piece No. II in Chapter 3. 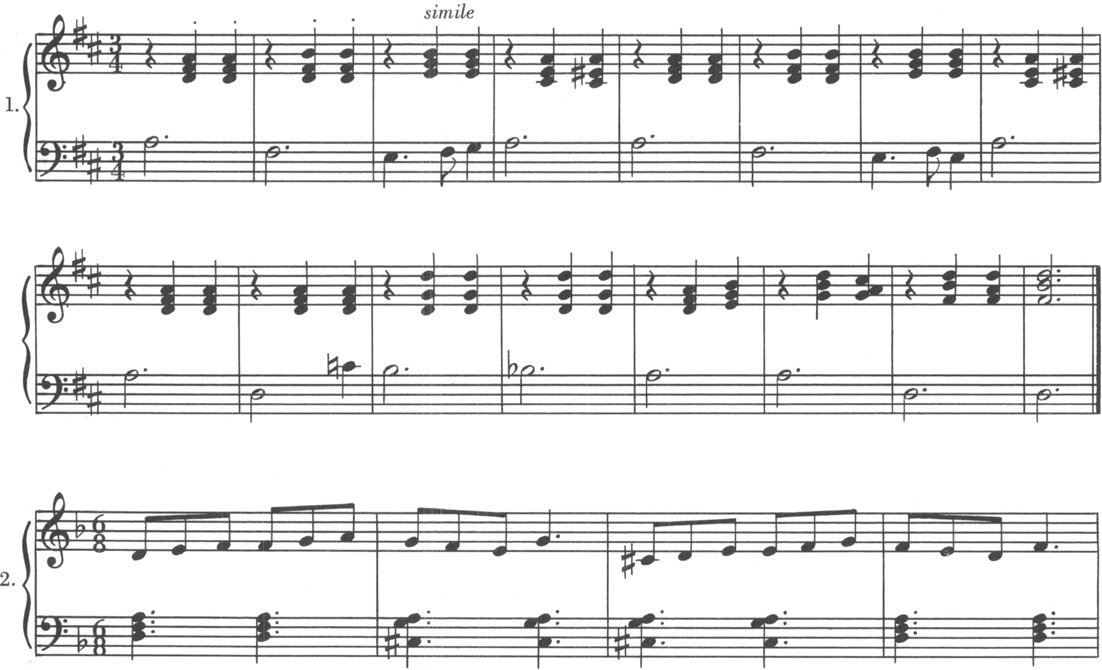 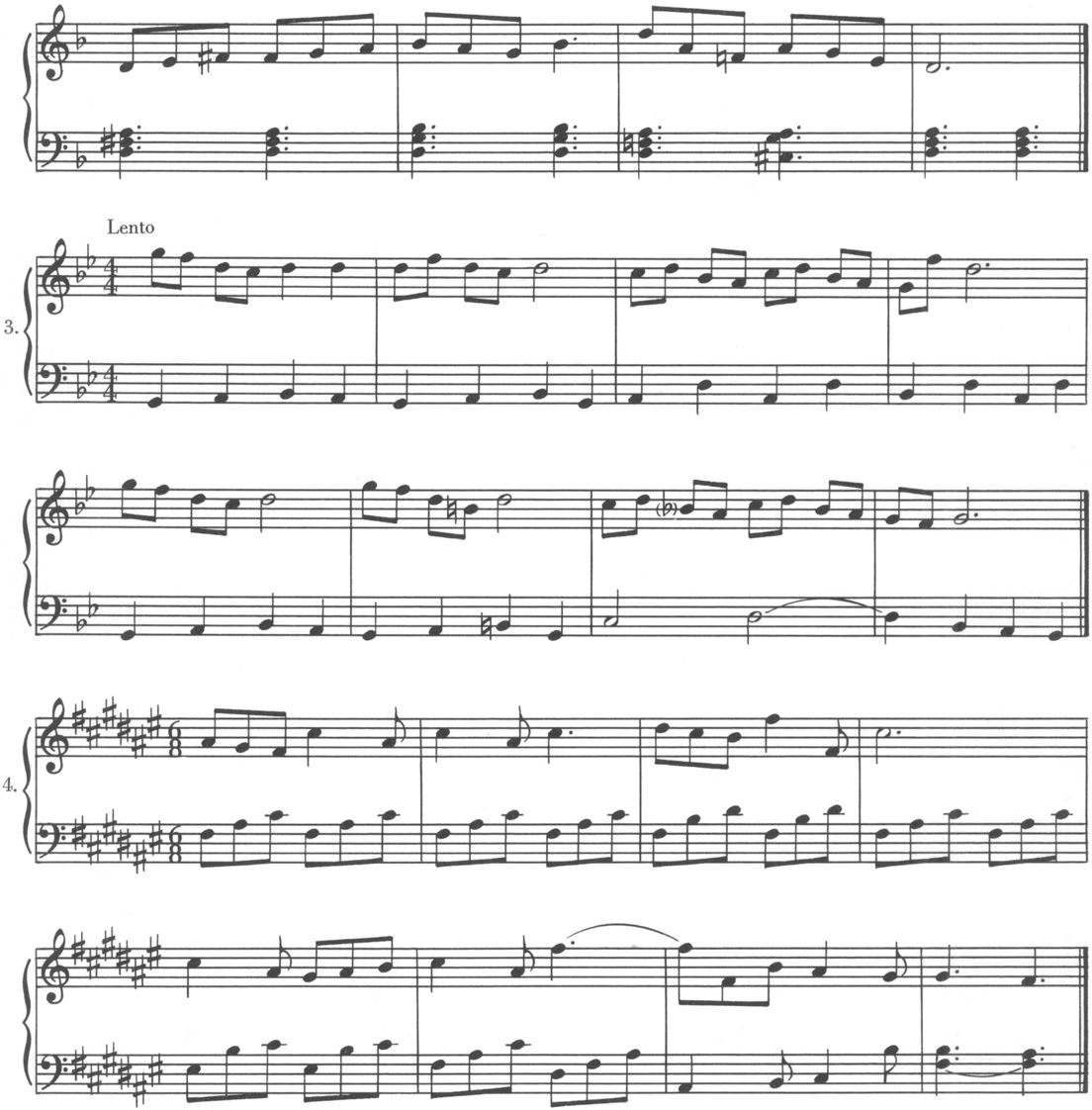 You may now expand your improvisation vocabulary by including accented non-harmonic tones, inversions, and the new accompaniment patterns you learned in Chapter 7.

We shall continue to use the collective term accented non-harmonic tone to designate appoggiaturas, retardations, suspensions, accented upper neighbors, accented passing tones, and pedals-all of which fall on accented beats or the accented parts of beats. If you wish to do a bit of research in this area, you may, but to know the idiosyncrasies of each of these notes is not essential at this point and might create some confusion or hesitation at a time when moving forward freely and smoothly is of prime importance.

Review all of your music from the beginning and identify the accented and unaccented non-harmonic tones.

Complete the model beginnings, then work out your own improvisations.

Perhaps you are now a sufficiently skillful improviser to consider a new refinement. Instead of repeating a pattern or phrase exactly, try to vary it a little. You can do this in a number of different ways. You can change the harmony, the rhythm, or the mode; you can invert one or both parts, or reverse the hands; and you can change the accompaniment pattern or modify the melodic line, or do any of these in combination—to mention a few possibilities. These are devices which a composer uses routinely but they are not too complicated for an improviser. The first two measures of Figure 114, for instance, could be varied as shown in Figure 115. 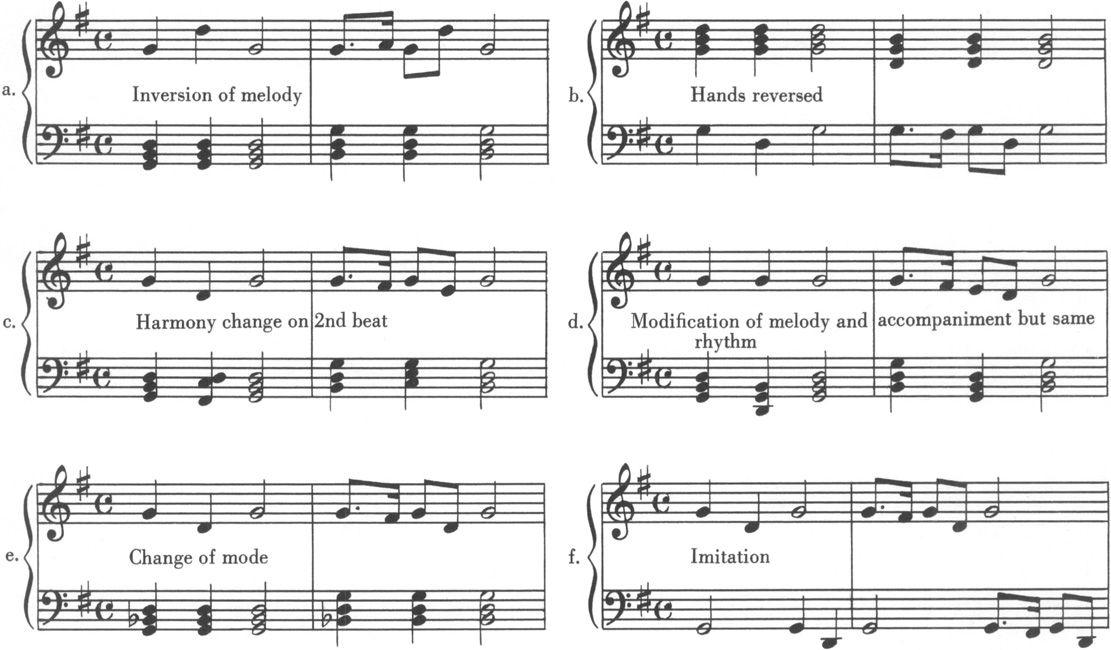 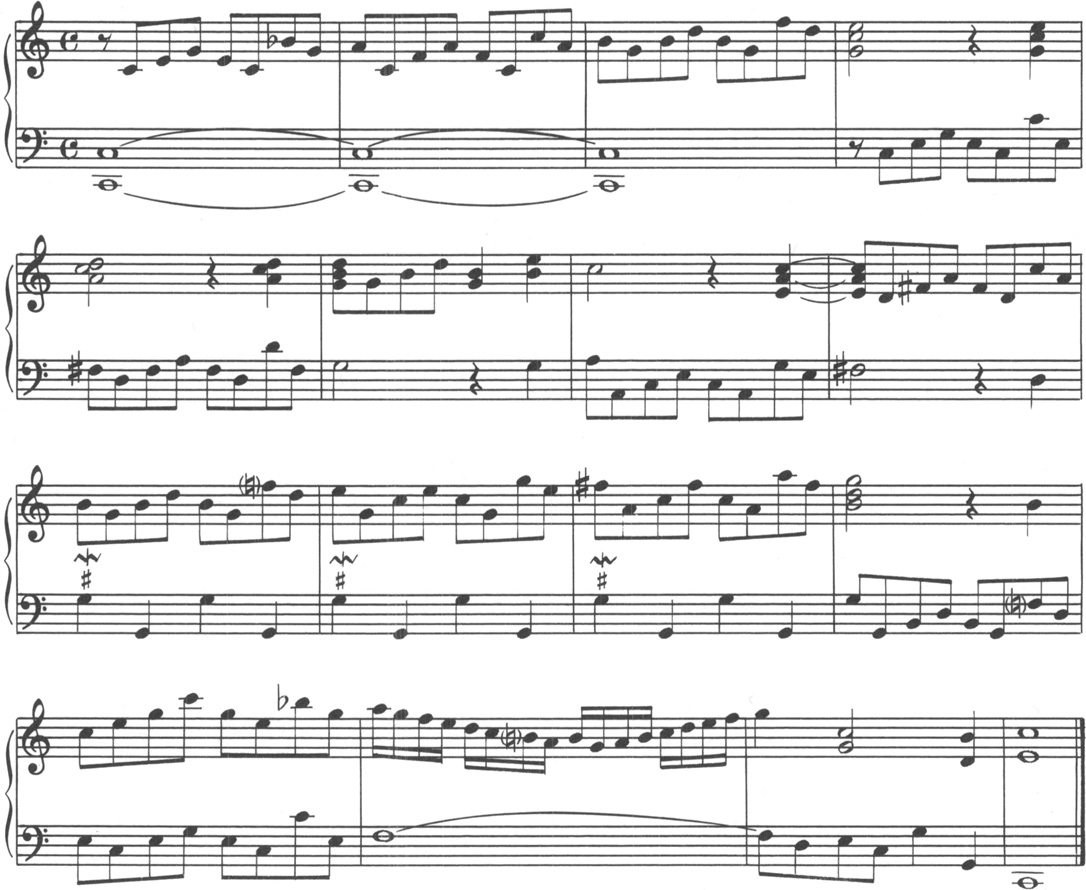 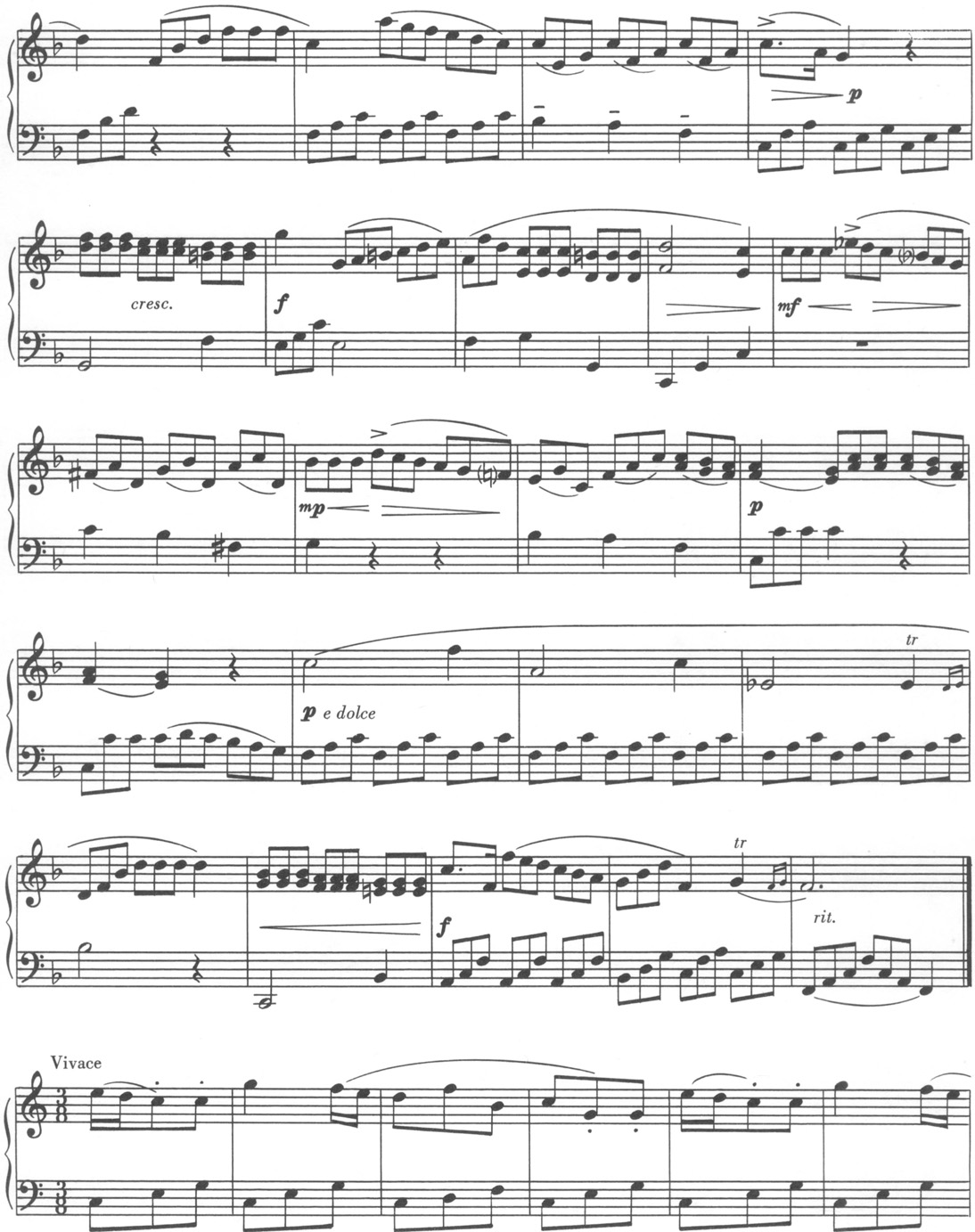 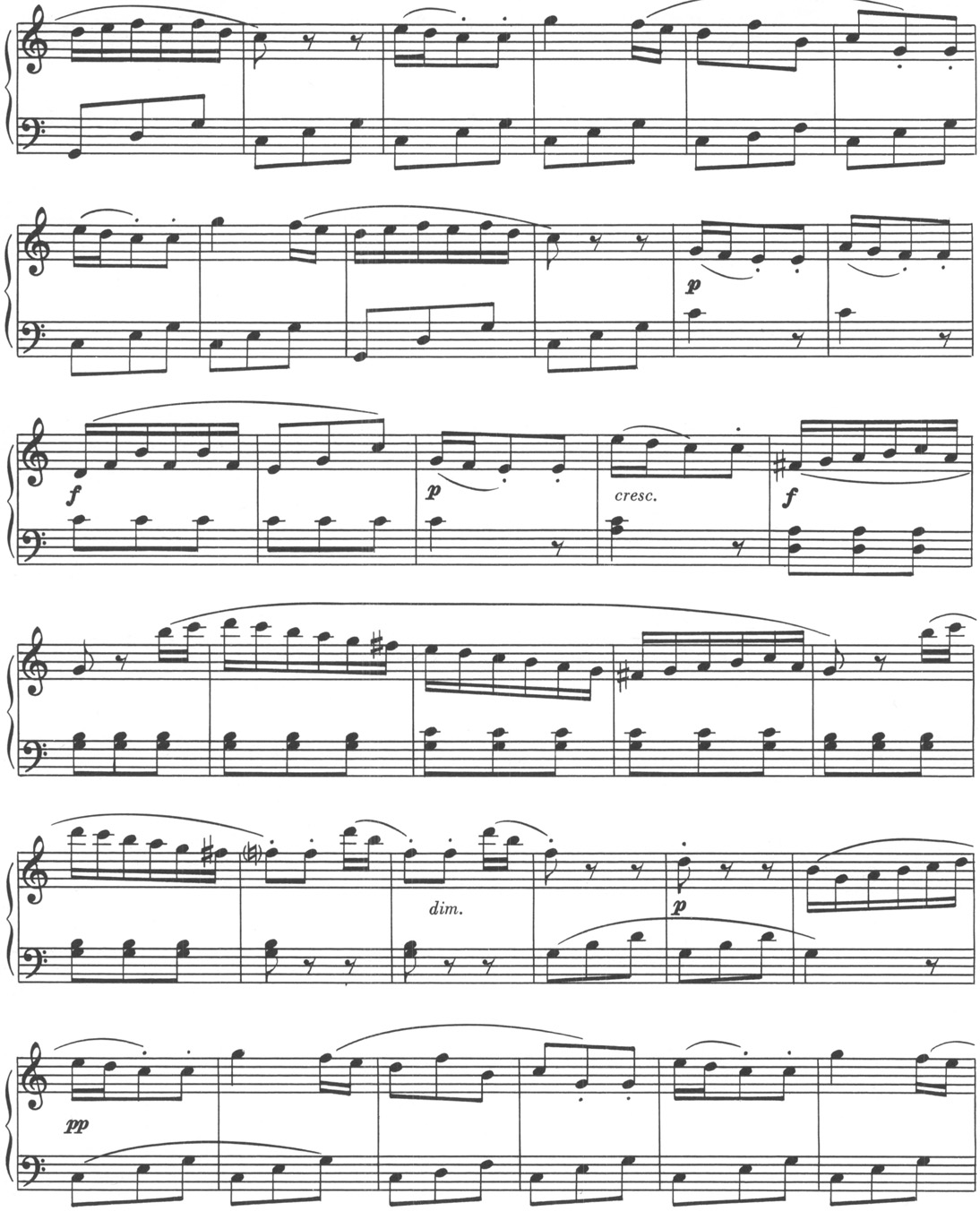 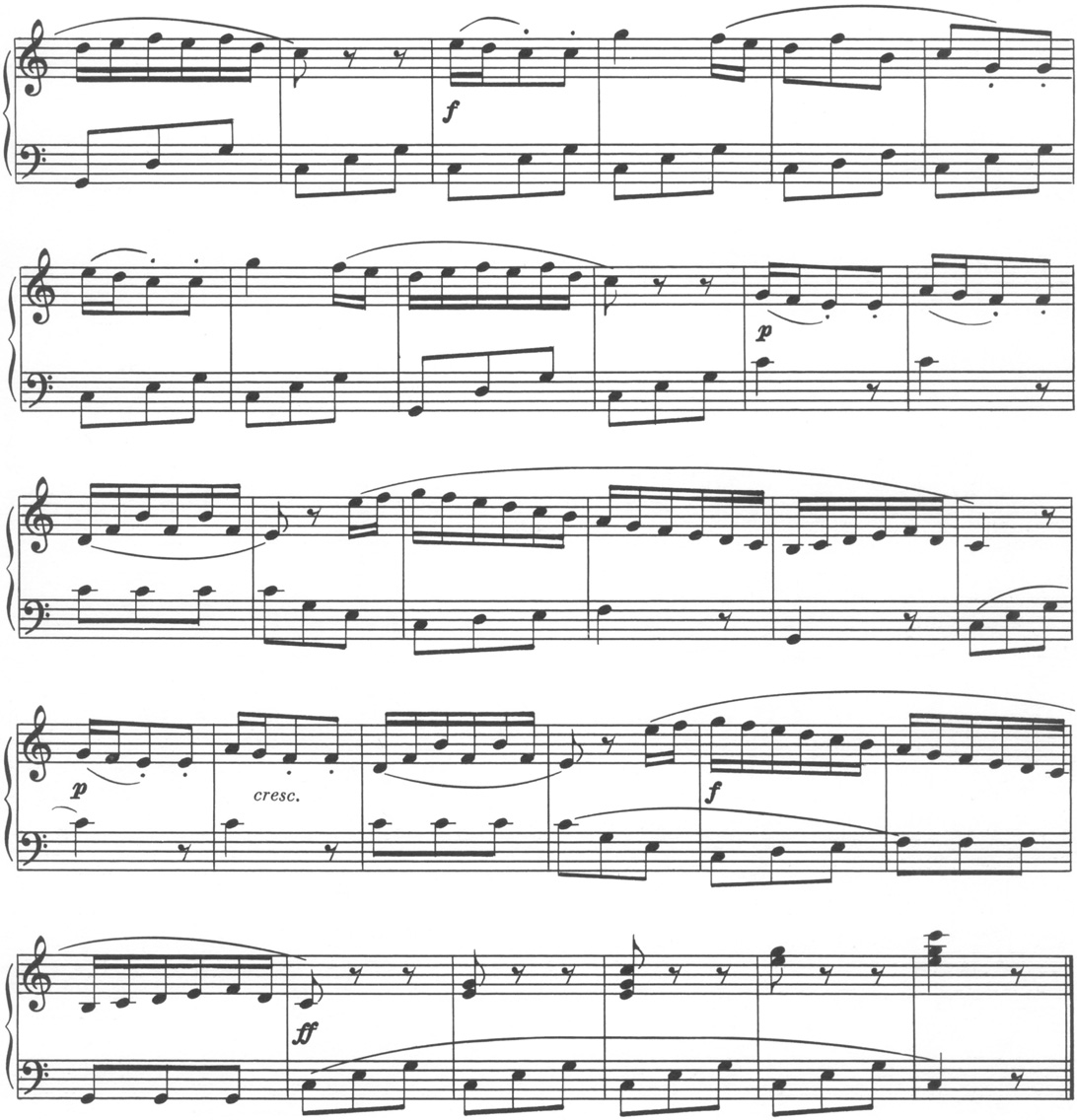 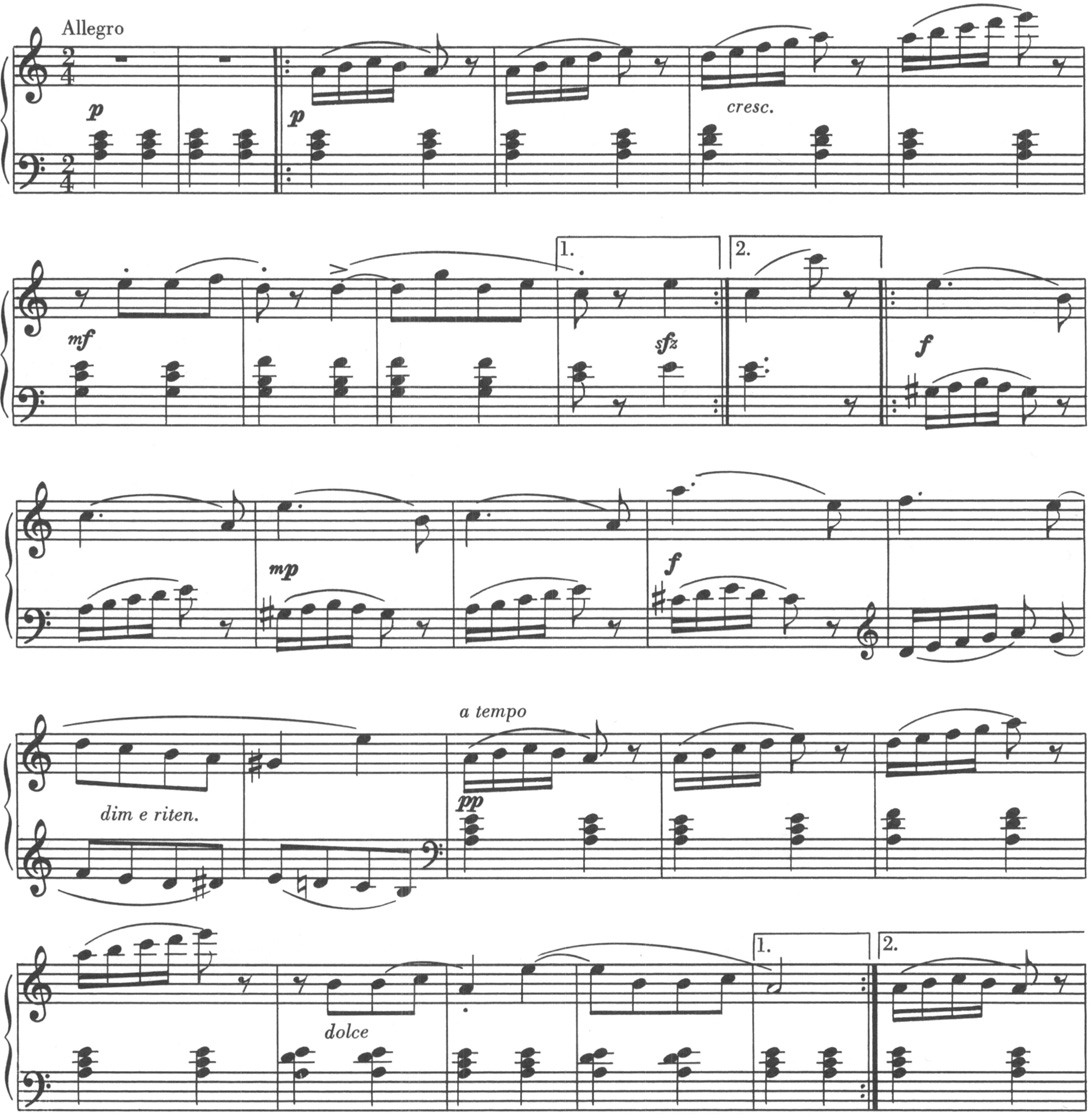 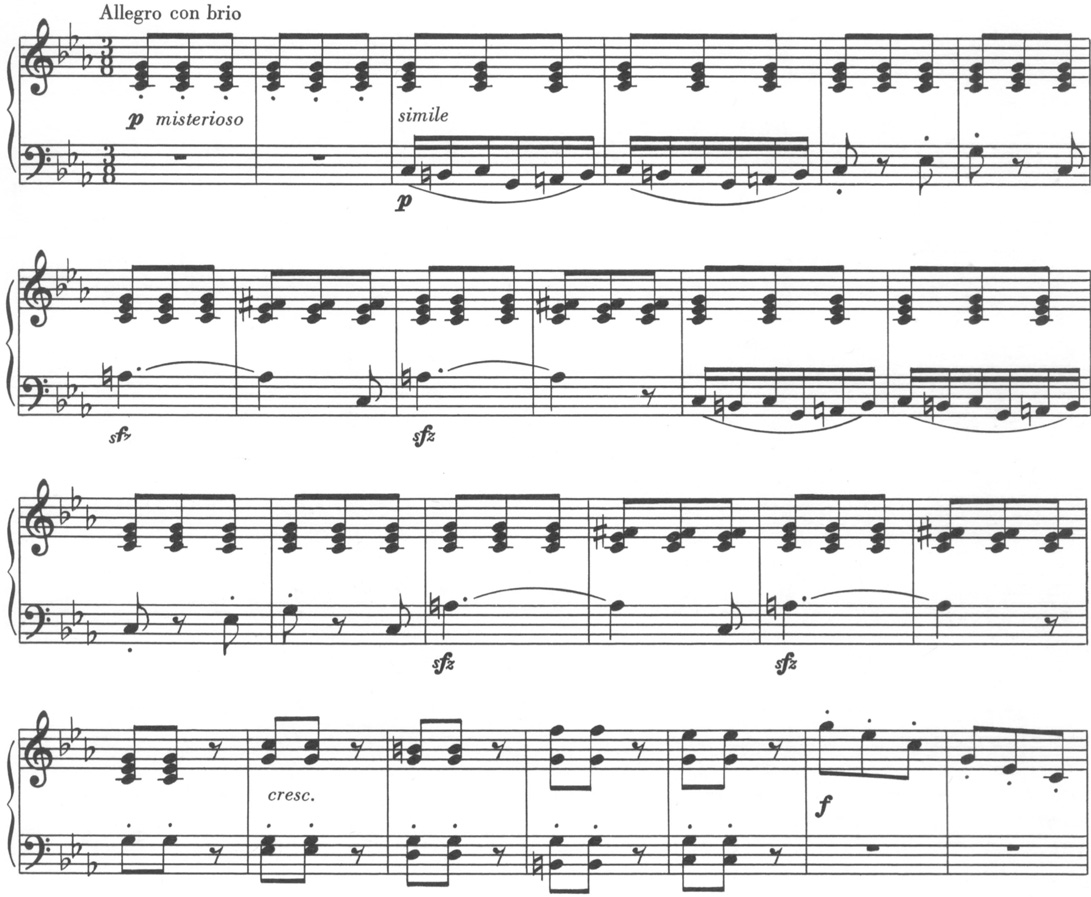 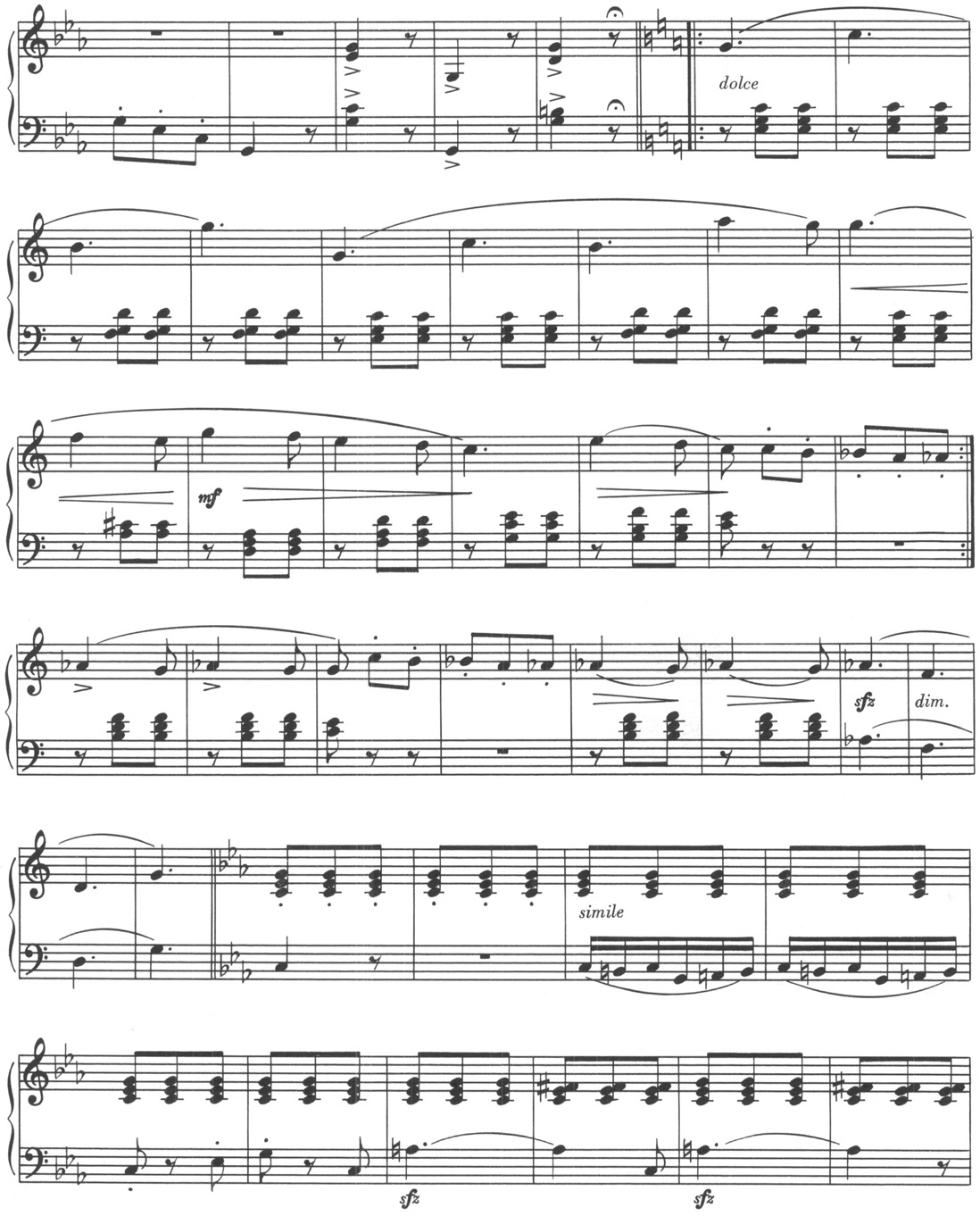 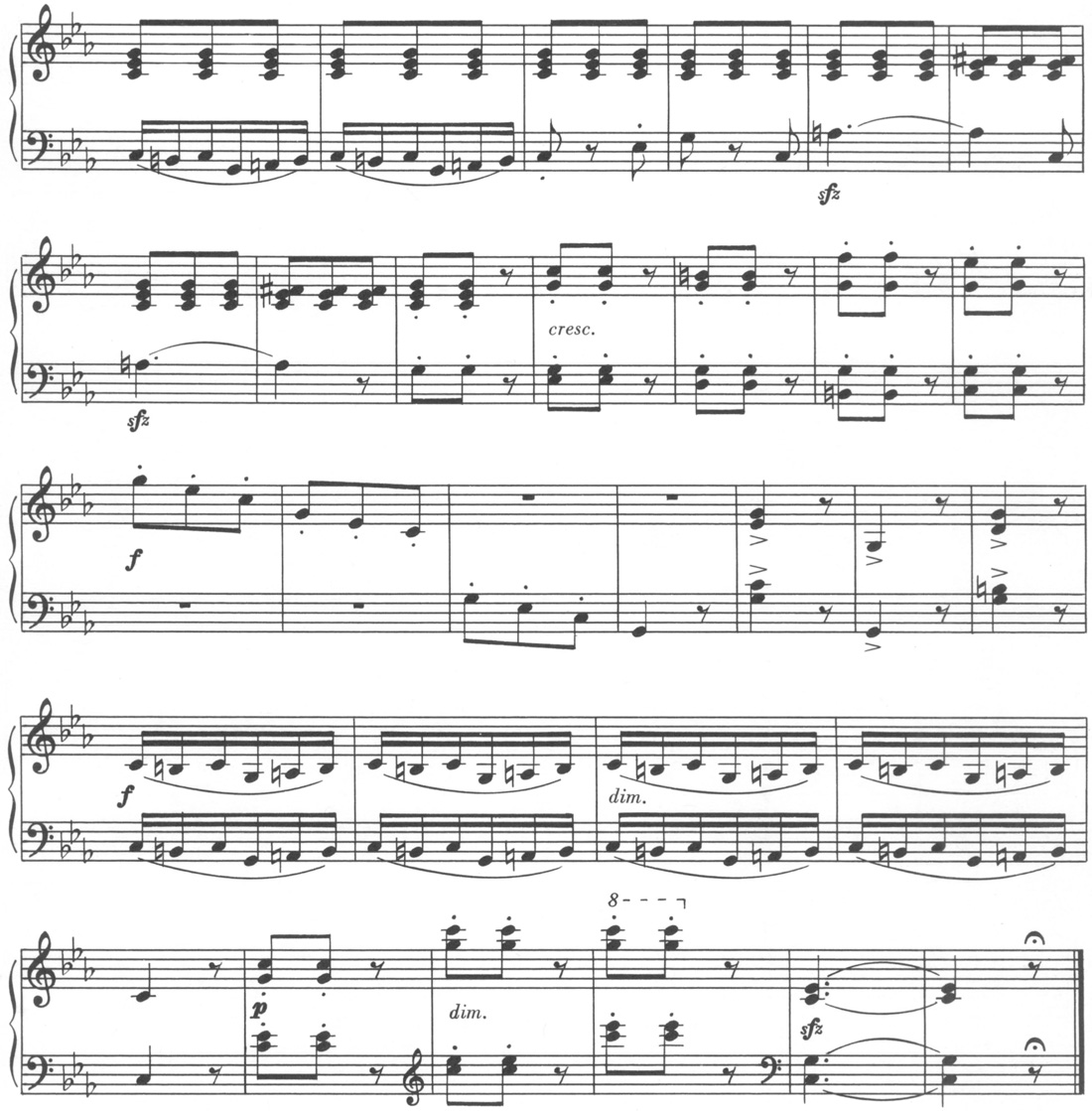 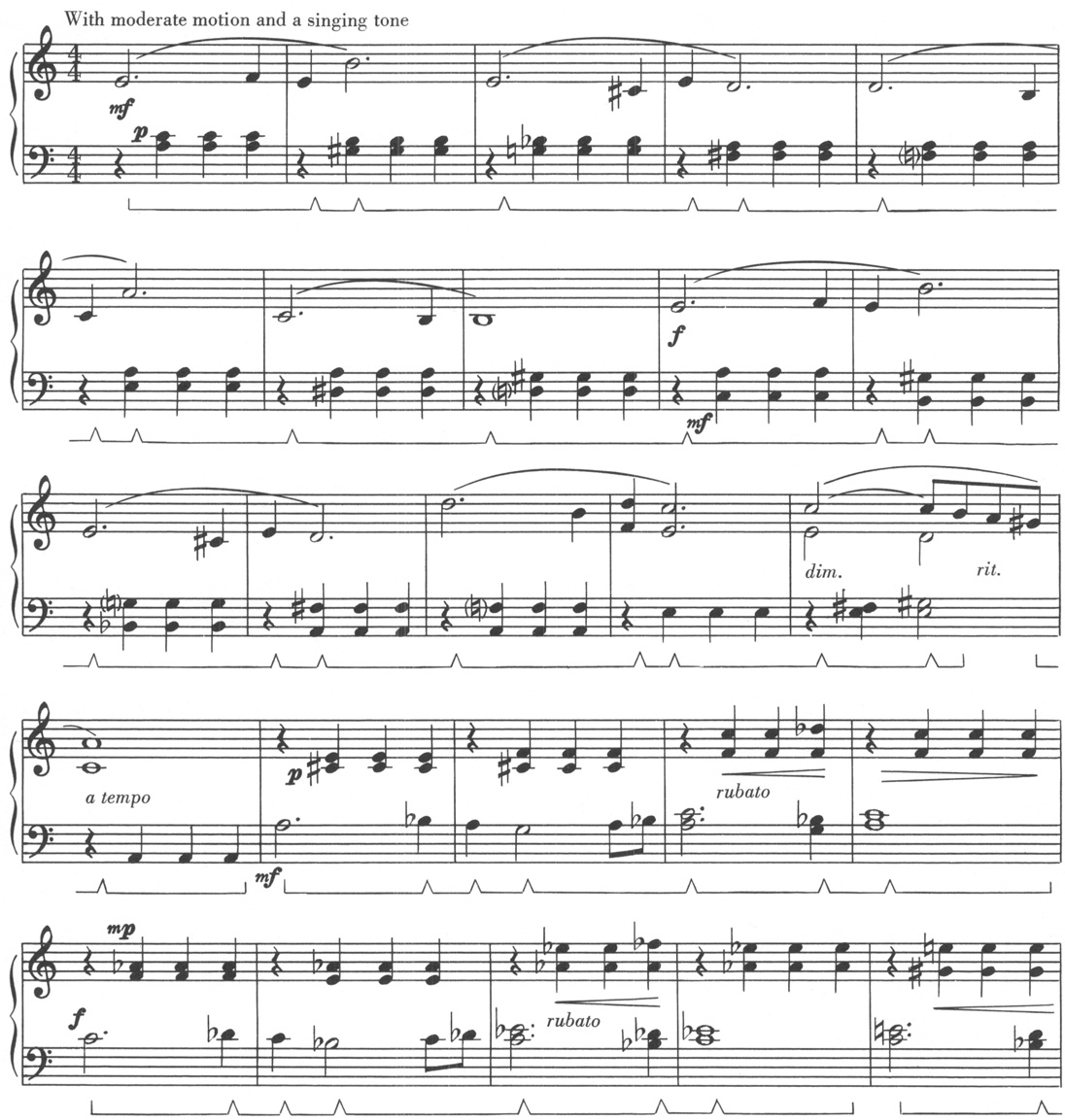 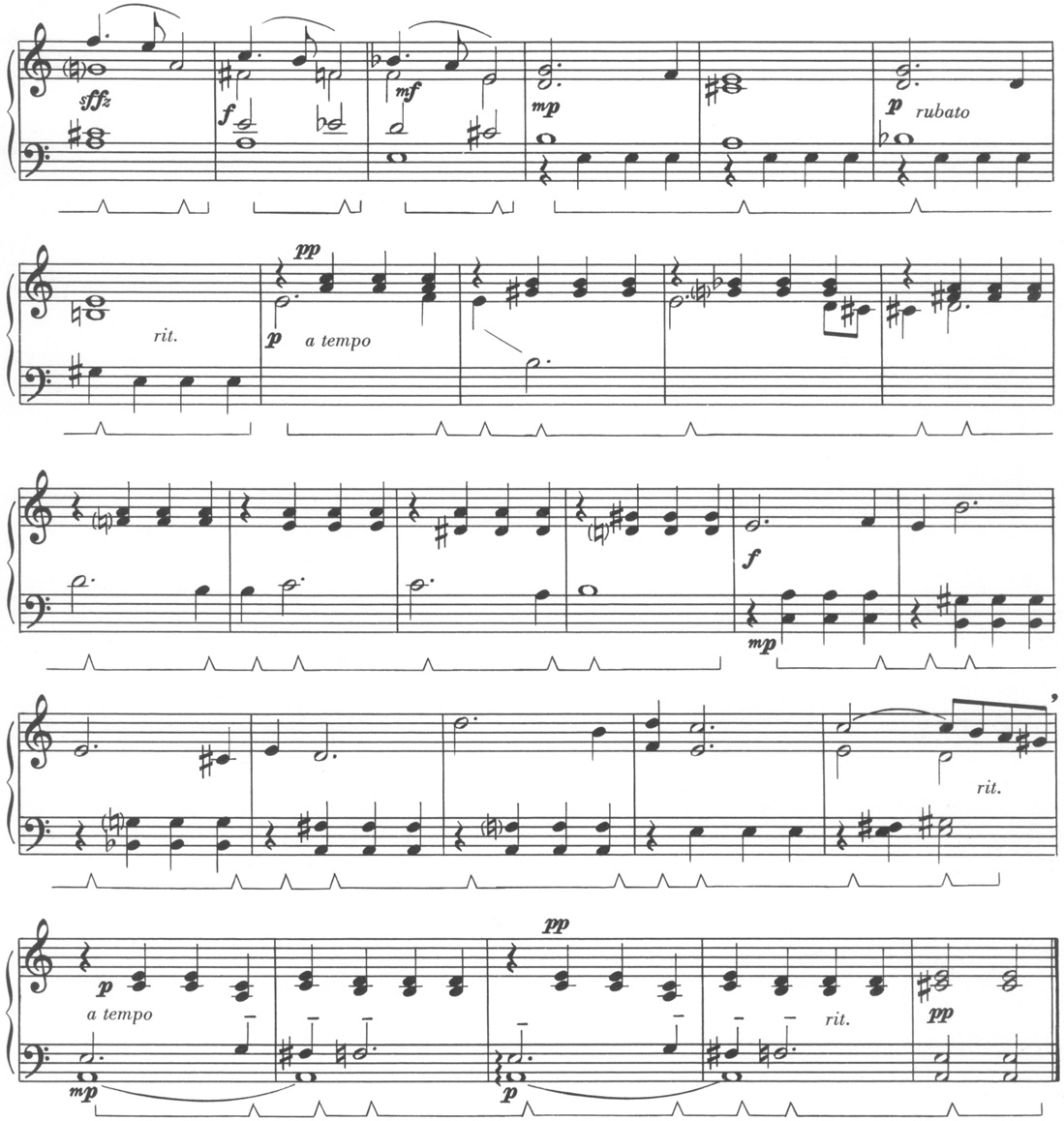