Passing fingers over the thumb:

Passing the thumb under the hand:

Lifting the hand to a new location (hand shift):

Changing fingers on a repeated note:

“Gliding” from one key to its neighbor with the same finger:

Although some of these examples are written for the right hand and some for the left, they are applicable to either hand.

Experiment freely with all of the devices. Occasionally some of them will overlap as when a contraction or replacement becomes, in effect, a hand shift.

FRÈRE JACQUES
(A Round)

After you have played the song as a duet and as a hands-together harmonized solo, play it as a round. To do this, the first player begins alone. At the third measure the second player starts from the beginning, playing an octave or two lower or higher. Players continue to enter this musical game at two-measure intervals for as long as there are players and pianos. It ends when the last player has been through the piece four times.

By now the I V7 I pattern is familiar to you. Warmup IV will help speed it up. Play it through all keys as rapidly as possible, being careful to strike the three tones of each chord exactly together.

Framing Chords from Above

In the last chapter you learned to frame chords at the keyboard. Now see if you can frame them in the air. With your right hand held high over the keyboard, assume the position which you think will exactly conform to a major triad, then bring your hand down slowly without the least change and see how nearly it fits the chord you are aiming for. Do this over a number of triads and keep score of your successes and failures.

Your skill in framing chords will help you in the next warmup, which consists of nothing but C major triads starting with the lowest on the keyboard and progressing up through each octave to the highest, then down again, alternating hands. When you can play the warmup as written, play it on all other major triads. In some keys you will find that you are an octave short so must play the last chord with your right hand instead of your left hand. Can you tell which keys these will be? 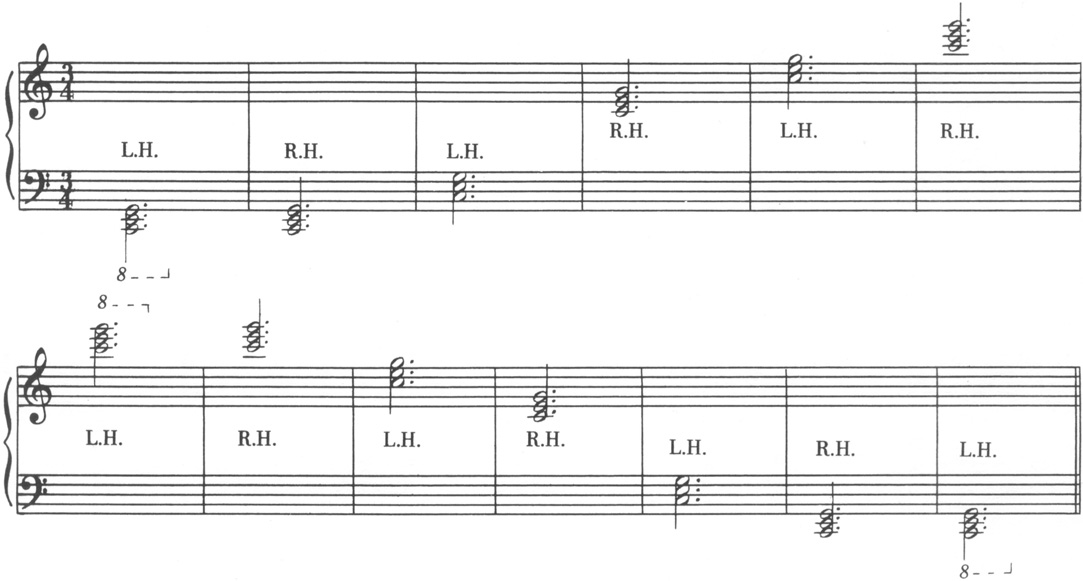 First Use of the Damper Pedal

As soon as you can play Warmup V perfectly in every key, you may use the pedal. As you strike the first chord, depress the right pedal (the damper pedal) with your right foot and hold it down for the duration of the warmup. If you make the slightest mistake, you must release the pedal immediately.

Our new chord is the subdominant triad, or IV chord, indicated by IV. As with the V7 chord, we will use it by rote for the present. It is approached from a major triad thus: the lowest voice is retained, the middle voice moves up one half step, the highest voice moves up one whole step.

This new chord will add a great deal to your harmonic resources, as you will discover when you harmonize the next songs. Play them in all keys, with the melody in either hand.

Until now you have been playing in as smooth and connected a manner as possible, releasing each key as you strike the next so that there is neither break between tones nor overlapping. You have been playing legato. All piano music is assumed to be legato unless otherwise indicated.

In Lyric Piece No. II we find such an indication. The dots over the accompaniment chords mean that the chords are to be played staccato. Theoretically, staccato marks halve the value of notes so that a quarter note with a dot over it would be equivalent to an eighth note followed by an eighth rest. In practice, however, the staccato mark is more an indication of touch than of tone duration. There are several kinds of staccato touch though all produce a short, detached sound. In Lyric Piece No. II the chords should be played with a slightly stroking motion, and the two chords in each measure should be exactly alike. As a preliminary exercise it would be helpful to play Warmup IV with staccato quarter notes.

The left hand in the first part of Lyric Piece No. II and the right hand in the second part would be played legato even without the slurs. The function of the slurs is to indicate phrasing. At the end of each phrase lift your hand a little. This is somewhat like breathing for a singer; it helps punctuate the music and makes it more intelligible. Experiment with dynamics and write them in. 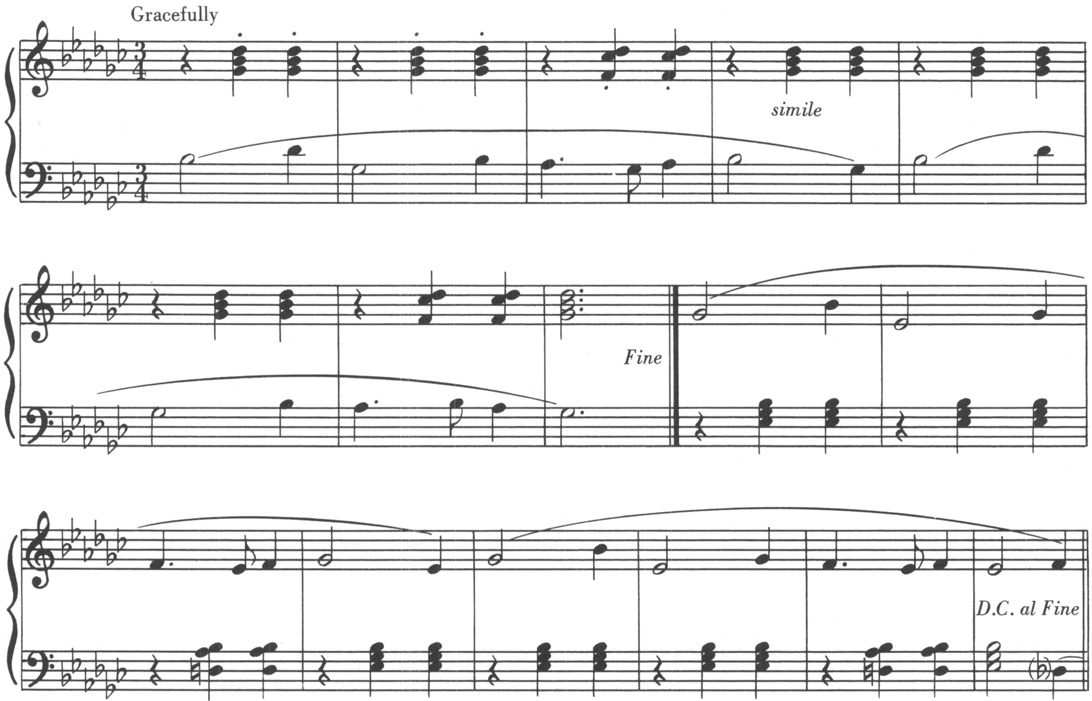 With the Italian Hymn we have our first formal duet. Here, two players share one keyboard—the upper player performing the primo (I°) part, the lower player performing the secondo (IIdo) part. The players will not feel too crowded if the Primo pianist holds his left wrist rather high and plays toward the back of the keyboard, while the Secondo pianist drops his right wrist and plays toward the front of the keyboard. Before playing, decide on the tempo; then let one player establish the beat by counting a preliminary measure. The dotted lines leading from the right hand part to the left hand part in measures 7 and 8 show that in spite of a change in staff and hand, the melodic line is unbroken.

Your new exercise, designed to strengthen fingers, is of the variety known as isometric, which means pushing against yourself– and that is exactly what you do.

In turn, push your thumb against the tip of your second finger, then against the tip of your third finger, then fourth and fifth. Count four in a moderate tempo, pressing together on the count of “one” and relaxing on the count of “four.” Do this four or five times for each finger. The trick is not to let the first joint of any finger collapse or buckle. Try to make a circle with the thumb and each finger.

Memory plays an important part in sight-reading. Once you have identified a given chord, you should not have to reexamine each of its elements when the chord is repeated, but simply recognize the collection of notes as a single symbol of a now-familiar chord. This is known as cluster, or note-group, reading, and is analogous to the simultaneous perception of several words, or even sentences, by a rapid reader of books. Only a very defective reader spells out each word letter by letter.

For musicians such as singers and performers on orchestral instruments, reading two staves at once often presents difficulties—the player being torn between trying to focus his eyes first on the upper staff, then on the lower. Consider, though, how you perceive a house or a picture or a landscape. If a house, you note at once its style, color, and materials; whether the door is in front or at the side; how many stories it has; if the windows have awnings; what flowers, shrubs, trees—if any—adorn it, and so on. If a picture, you can observe in an instant the table with its green covering and bowl of fruit; the carved Victorian chair with the sleeping cat; the open window whose fluttering curtain affords a glimpse of blue sky and fleecy clouds. And how long does it take to discern in a landscape the broad meadow with its solitary elm beneath which stand two white horses, as though to take shelter from menacing storm-clouds above?

If you can absorb all these details at a glance, it will be no great task for you to note the symbols on two staves in a space scarcely an inch-and-a-half square! Just relax your gaze, letting your glance move easily between the staves and seeing the ten bracketed lines as a single picture.

While you should not “try over” ahead of time the material to be sight-read, it is always advisable to survey it silently and briefly, checking on accidentals, rhythms, unfamiliar notes, ledger lines, clef and possible change of clef, and of course key signatures and time signatures. Sometimes an unexpected density of rests and notes will cause a player to panic and fumble a passage which is in reality quite simple. For example, in No. 1 below, the second half looks “fussier” than the first half, but is really the same: the left-hand chord is merely delayed for one count, then struck twice. Likewise, in No. 3 the single bass notes in the second half are simply notes of the chords which appeared in the first half. A preliminary survey of these studies would make such matters clear before the player confronted them in actual performance.

In the following sight-reading studies you will need the assistance of your piano-mate in operating the pacer since you will be using both hands at the keyboard. You should be able to read one full measure ahead if you have made a proper preliminary examination. 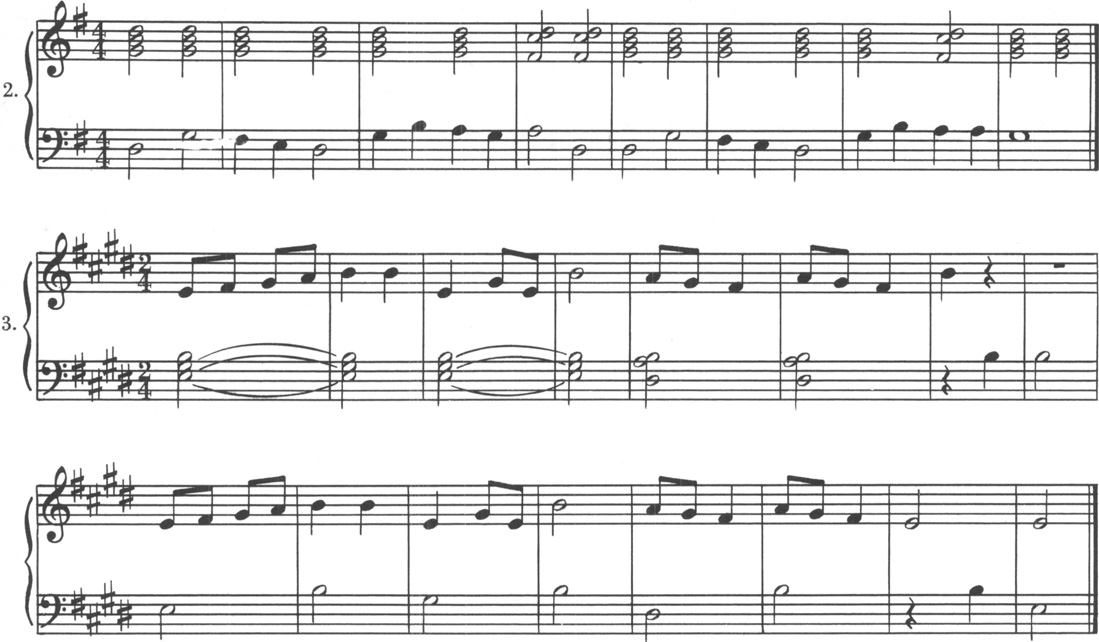 You may now combine the V7 chord with the I chord in your improvisations, but confine your melody to those tones which are to be found in the two chords, using the tones of the I chord when the tonic harmony prevails and the tones of the V7 chord when that harmony prevails. Improvise in all keys, with the melody sometimes in the right hand and sometimes in the left. Make use of different meters:

The models (Figures 27 and 28) will suggest other ways in which to combine your materials.

It may occur to you that there are two ways in which to approach your subject: if you are thinking melodically, you have only to accompany the melody, but if this is difficult, you may plot out a chord progression and construct a melody from the available tones. It is not easy to restrict yourself to chord-tones in developing a melody, but by limiting your resources you will gain skill in handling them.

There is still another way to “get off the ground” and that is to use an already established beginning as a springboard and take off from there. The first two measures of Figures 27 and 28 could serve this purpose. Figures 29 and 30 provide two more starts. Add four more measures to Figure 29 to make eight measures in all, and add two measures to Figure 30 to make four measures in all. Be sure that you end on the tonic harmony.