The fact that you are about to use this text means that you are one of the many persons with some musical knowledge but little or no keyboard skill. You probably are familiar with the names of the keys on the keyboard and very likely you have an understanding of time and meter, notation, key signatures, and clef symbols. If at any time an unfamiliar term appears here and is not immediately explained, be sure to look it up in your theory book or a music dictionary.

Half Steps and Whole Steps

Piano proficiency involves many diverse elements which range from the strictly physical (finger agility and hand-eye-foot coordination) to the esthetic (tone, pedaling, interpretation) and the intellectual (improvisation, transposition, analytical listening), but for the beginner the first requirement is familiarity with the keyboard. This means more than a mere awareness of regularly spaced white keys punctuated by alternating groups of two and three black keys; it means a knowledge of intervals, and we shall begin with the smallest—half steps—because half steps are our building blocks and from the very start we must know how to use them.

Chromatic scales. When we have an extended series of half steps moving in one direction, we call it a chromatic scale. 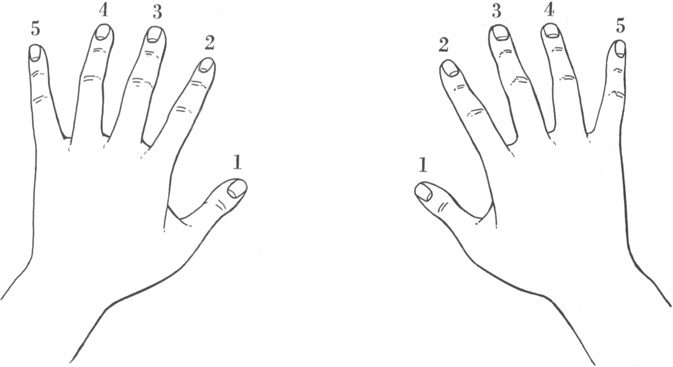 Now, if you will put your right first finger—1—on middle C (the C nearest the keyhole or maker’s name) and place 2, 3, 4, and 5 on each successive half-step above it, you will have a short chromatic scale.

Whole-tone scales. As you might suppose, two half steps make a whole step. Can you point to the keys one whole step up and one whole step down from B, F, A♭, G, C, D#, and E?

Whole steps are sometimes called whole tones, and when we have an extended series of them we call it a whole-tone scale.

Let us begin with the first finger of the right hand on a black key—G♭. Can you discover the four whole-tone steps which climb from G♭?

Play the same series with your left hand, beginning with the fifth finger. Construct other whole-tone sequences starting on black keys and on white keys, playing them with each hand, up and down.

Diatonic scales and five-finger positions. Diatonic scales consist of a combination of whole steps and half steps. When you place the fingers of your right hand over the five white keys from C to G, your fingers are on the first five tones, or degrees, of the C major scale. This is called a five-finger position. Play these keys one after another and as you do so notice whether they are separated by a whole step or a half step. If you found only one half step—between the third and fourth degrees—you were correct.

Now you have the pattern for all major five-finger positions:

This is expressed as follows:

With this knowledge and your familiarity with half steps and whole steps you can now play five-finger positions in any major key. Close your eyes and drop your right thumb at random on any key; then (having opened your eyes) construct a five-finger position on that key. Do likewise with your left hand, starting to play upward, of course, from the fifth finger. After you have experimented a bit more with these isolated five-finger positions you will be ready to organize them into our first warmup.

You will notice that in Warmup I each five-finger pattern is three measures long and ends with the same note on which it began. The ending note is a half note having two counts. This with the half rest gives you an entire measure in which to figure out the notes to include in the new five-finger position. Here are the first few sequences. When you have grasped the rhythmic pattern, carry the sequence through the entire octave—or farther, if you wish.

Two admonitions before you begin:

At first, play this warmup hands separately. When you can do that easily, play it hands together, the left hand playing an octave below the right hand. Saying the scale-degree numbers aloud as you play will help you to establish the half step between 3 and 4 in each five-finger position.

The ability to read and play music at sight is an essential part of any musician’s equipment. Naturally, you must be completely familiar with the keyboard and the printed notes. If you are not, or if you can identify the notes readily in one clef but not in the other, you should make a careful study of the Grand Staff in your music dictionary.

In addition to instant note identification are three other factors of equal importance. First is keyboard sense or the “feel” of the keyboard, which enables your hands to find their way over the keys without your having to look. Without this ability the pianist is obliged to glance back and forth from the printed page to his hands, invariably losing his place in the music as well as on the keyboard, slowing the entire process, and inviting “stumbles.” To play without looking at your hands may at first seem quite impossible but by following the directions in this book you will gradually develop skill.

The second ingredient essential to good sight-reading is the ability to look ahead. The very best sight-readers are able to look half a page ahead, as evidenced by the point at which they nod for the page to be turned. At the other extreme, the inept reader can scarcely wrench his eyes away from the note he has just played in order to examine the note he is about to play. As with keyboard sense, the ability to look ahead is a skill which can be developed and toward which we shall aim from the outset.

The third requirement is simply to keep going. Never stop to correct a mistake; leave out notes rather than impede the rhythmical progress of the music.

Counting aloud will help. Incidentally, it is a great advantage to establish a habit of counting at the very beginning of piano study, before time and rhythms become complicated and present problems.

These first exercises in sight-reading are merely note-key-identification—but with a difference: while you are playing one note you must be looking at the next! To help you do this make a sight-reading pacer by cutting a strip of cardboard 5 or 6 inches long by 1½ inches wide. Hold one end of it with your left hand while you play the notes with your right hand. This is how it works:

For this exercise you may use any finger which is convenient.

You may sometimes have to glance down at the keys since you have not yet developed keyboard sense. Playing the notes with the left hand and using the pacer with the right hand is a trifle awkward but entirely possible. Two players at one piano may take turns “pacing” each other. Later, when sight-reading involves playing with two hands, help from another person can be of the greatest benefit.

These and all subsequent sight-reading exercises should be played three times.

SIGHT-READING FOR THE RIGHT HAND

SIGHT-READING FOR THE LEFT HAND

Now that you have mastered five-finger positions and have made a start at sight-reading, you are ready for some “pieces,” but just melodies for the present.

Before playing Lightly Row on the piano, play it “in the air” with each hand alone, at the same time singing the scale-degree numbers. Do not confuse the scale-degree numbers with finger numbers even though they are the same at the moment. They will correspond only briefly with your right hand finger numbers and almost never with your left hand numbers.

Transposition means playing music in a key other than that in which the music is written. If you are transposing to a key with the same letter name as the original key—to A major from A♭ major, for example—you have only to substitute a different signature (three sharps in place of four flats) while reading the same note-letter on the staff. The A♭ then becomes A♮ but is still located in the second space of the treble staff. Figure 6 will make this clear.

If you were transposing F# major into F major you would substitute one flat for the six sharps but still find F in the first space of the treble staff. In other words, you imagine a different key signature but continue to read the notes as you see them printed on the staff.

The process is different when the letter name of the new key is not the same. In this case you must transpose by means of scaledegree numbers. While your melodies are restricted to the first five degrees of the scale this is very simple. Here are the steps you will follow:

The expression “playing by ear” often connotes a species of fumbling, hit-or-miss-and-mostly-miss gropings at the keyboard which is rightly condemned by serious musicians. Playing by ear need not, however, be of this order. When undertaken with informed awareness it can be useful and pleasurable. It is merely a matter of knowing what one has heard, or is hearing in the mind’s ear, and reproducing it. “Knowing” is the key word; guessing has no place in this scheme, nor has luck. As you progress in your studies you will be given many opportunities to develop the necessary discriminating and analytical ear.

Everyone is familiar with Merrily We Roll Along (or Mary Had a Little Lamb) so we will begin with that.

Play each of these songs “by ear,” hands separately, and in several keys.

An amusing auxiliary game is to try to identify by scale degree, when away from the piano, the first notes of various songs which come to mind or which one hears on the radio. Not all songs begin with a tone in the five-finger position, but when they do, the first tone should be easily identifiable after a little practice.

In the early stages of piano playing, many a student experiences difficulty in making his hand do his bidding and in coordinating his two hands. The Hand Gymnastics will help you gain mastery over the various parts of your hand, and the Rhythm Drills will help with hand coordination as well as with rhythm.

Sixth position. Bend first and second joints of fingers as far as possible. Try to press finger tips against edge of palm. 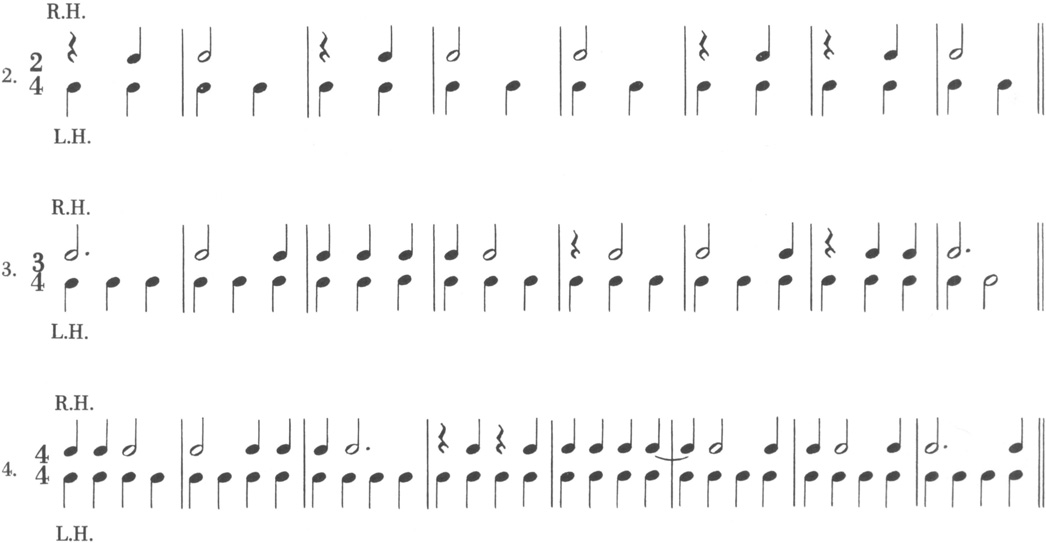 Make up and write down similar rhythm drills.

The final words in this chapter concern practice. No matter how elementary the level at which you begin, the way in which you practice is of the utmost importance. First of all, regularity is essential: a half hour each day is better than three hours once a week. Next, have a plan. The plan may vary from person to person depending on degree of advancement, amount of time devoted to practice, and individual needs, but the following precepts can guide you: