What a beautiful journey from New York to Niagara. Especially as far as Albany the landscape is exquisite, as the track runs along beside the admirable Hudson River. I have been searching my memory for some European river which I might compare with this American one. Certain places recall the most beautiful spots along the Rhine, others surpass in grandeur and charm everything that I have even seen.

The journey takes place under the best conditions. The Pulmann17 cars are an excellent institution; to be on the train and to be subjected to none of the inconveniences of the train, that is the great problem which has been solved by these wonderful coaches. You are not confined as you are in Europe in narrow compartments, nor exposed to the itching which you get in the legs after a few hours of immobility, nor do you have to fear the paralysis caused in your tired members by staying too long in the same position. In the American train, you can walk up and down through the carriages, one after the other from the baggage car to the rear bumper; when you are tired of walking, you find an elegant drawing room, and soft chairs where you can take your ease; you have within reach everything that makes life agreeable. I could do no better in summing up my admiration for the American railroads than to say that they are really cradles on wheels.

But I certainly don’t like the perpetual bell which accompanies you during the whole journey with its funereal tolling, but perhaps one can get the habit. One must not have a very sensitive ear when traveling in America, since one is continually plagued by annoying noises.

At Utica where we stopped a few minutes for lunch, I saw—and heard, alas!—a big Negro pounding on a tom-tom. Clearly he was making up the tune, for sometimes he beat loud, sometimes with astonishing speed, sometimes with measured slowness. He played, I will not say with fine nuances, but with different meanings. I forgot to eat lunch, because I was examining this interesting musician. During his last piece—for him it must have been a piece of music—I was all eyes and ears. He began with a deafening fortissimo, for this Negro was strong and he went at it vigorously. After this brilliant beginning, the music continued with a decrescendo which became piano and then pianissimo and then . . . silence. At that moment the train started, and I barely had time to jump on the step when it was off at full speed.

We arrived at Albany and stopped for dinner. In front of the restaurant at Albany, I found another big Negro almost exactly like the other and also playing a tomtom. They seemed to be everywhere; this country must passionately love the tom-tom. 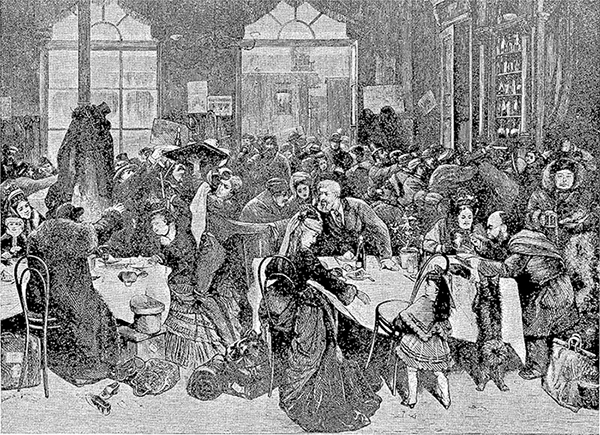 “A hungry stomach has no ears,” says one of our proverbs. I am sorry to put myself down as contradicting a saying founded on the wisdom of nations; for in spite of my formidable appetite the Negro’s music haunted me during the whole meal. He was playing exactly like his colleague at Utica; his piece was composed of the same succession of forte, piano, and pianissimo. Astonished at this strange coincidence, I was just about to ask if the Negroes thought that solos on the tom-tom were music and if they were playing their national anthem, when one of my friends forestalled me.

“You’re interested in the Negro,” he said to me. “You can expect to find one just like him at every station on this line.”

“Is it a delicate attention on the part of the railroad company?”

“No, it is the restaurant keepers that maintain them. They play the whole time that the train remains in the station, and their music serves to keep the travelers who have gone into the restaurant informed as to the time. As long as the tom-tom is sounding at full speed, you can be easy; when the noise diminishes, that’s the sign that you must hurry. When it almost fades away, the travelers know that they’ve got to rush to the train, which like Louis XIV never waits, and what is still more disagreeable, never gives any warning of its going. Too bad for those who miss the train!”

I am not certain whether or not I prefer the American system to the one used, by a restaurant keeper at Morcenx between Bordeaux and Biarritz. Not having any Negro the proprietor himself shouts at intervals in a stentorian voice, “You still have five minutes! You have four minutes more! You have three minutes more!” Basically, the two systems are alike. The only difference is that one man deafens you by shouts in his restaurant, the other overwhelms you by his music in the open air.