I went to the races at Jerome Park.15 The field where the steeplechase takes place is a continuation of Central Park which I described earlier. It belongs to a rich banker, Mr. de Belmont [sic]. You must not expect me to talk cleverly about this sport, with the savoir-faire of my friend Milton of Le Figaro; I do not know the special language of the turf; I scarcely know what a starter is. All that I can tell you is that I saw at Jerome Park a rather muddy track and the things you see at every racecourse: lots of horses, lots of jockeys, lots of ladies, lots of gentlemen. If the horses seemed to be a little too fat, on the contrary the jockeys affected me as being a little too thin. But I will state nothing definitely. There is only one thing I can be sure of: here, as everywhere else, there is always a horse and a jockey who come in first, some men very happy at winning and others very unhappy at losing—there is betting here just as everywhere else.

My impression was that the spectators were riot very enthusiastic. The finish of a race, as the seven or eight horses competing drew near to the post, always in France and in England excites cries, acclamations, and hurrahs. One feels that for a few seconds everybody is, as it were, seized by a whirlwind of speed, carried away by the excitement of the spectacle and the emotions of gambling. Even our most correct sportsmen cannot witness this moment without manifesting in some way, more often than not by making noise, the intense interest they take in the result of the competition. At Jerome Park, nothing of the kind. A little shiver of interest, immediately suppressed, at the start and at the finish, in between a glacial silence. The noise, the bravos, the hurrahs that give life and gaiety to Longchamp and to Chantilly are completely lacking at Jerome Park.

Because I had only the slightest interest in the spectacle, I had leisure to look around me to observe, and so witnessed a curious and characteristic little scene.

Between two races, a man was walking quietly along the track; suddenly a little thread of smoke was seen to rise from his clothes, an almost imperceptible blue vapor, which immediately spread and became a veritable whirlwind. This man’s pocket was burning. Almost immediately there was a spurt of flame. “You’re on fire,” they cried to him from all sides. He certainly must have felt it because the flames were already licking his coattails, but with the sang-froid of a true Yankee, his first thought was to save his pocketbook. Fortunately, at the very moment he was drawing it from his inside pocket, several policemen threw themselves upon him and tore off his burning coat. He went off in his shirt sleeves, still quite tranquil, thanking the public and the policemen with a glance. 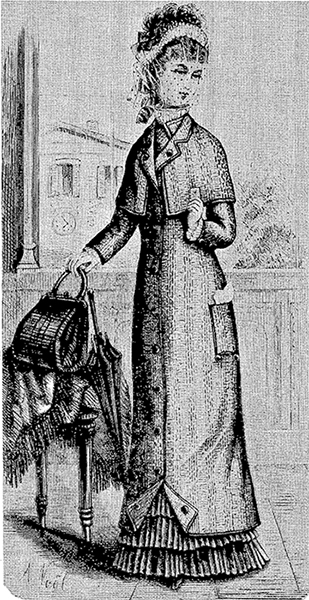 I have already described the distinction with which the charming American women dress. I had the occasion on that day to observe it again. They had come to the races in their freshest, their most brilliant toilettes, and I cannot tell you how delightful was the sight of the race track embellished with the presence of these elegant ladies. I am sorry that I cannot give the same praise to the American men, who all dress, I will not say simply, but very informally, so much so that at the theatre or at the concert, you can see them wearing clothes—frightful suits—such as we hardly dare to wear in the country or at the seaside. The soft hat is traditional. Even the most distinguished man does not hesitate to go out for the evening or to attend a dinner with a very elegant woman on his arm, wearing a soft hat of the most grotesque kind.

It astonished me to see that many of them wear white ties at all hours of the day and night. At six o’clock in the morning the Yankee winds around his neck a strip of batiste which he does not remove all day long. The ceremonial white tie and the informal costume which accompanies it are in strange contrast.

It amazes foreigners also to see that all American men have under the skirts of their frock coat, near the belt, a rather prominent bulge. This is the place where these gentlemen generally carry their revolvers or sometimes quite unimportant papers.