To return from Niagara I took the night train, wanting to find out for myself about the sleeping cars of which I had heard so much.

The parlor car was arranged as usual with comfortable armchairs along each side of the aisle, special compartments for smokers, and all the conveniences I had so much admired on the journey to Niagara. Nothing in the installation indicated that one might be able to sleep in a bed. For a moment I thought I was being deceived, because it seemed impossible for all the ladies and gentlemen who were with me in the coach to be provided with places to sleep.

Suddenly, about nine o’clock in the evening at the moment when darkness fell, two employees of the Pullmann company appeared and went to work. What clever workmen! Or rather what clever gadgets! In the twinkling of an eye the armchairs had been transformed into beds. How was this accomplished? Very simply. Boards were laid across the chairs, and on the boards, a mattress, sheets, and blankets. The car, thus metamorphosed into a dormitory, would not have sufficed for the number of travelers, but above each of the seat beds is another apparatus which, now unfolded, is found to be a cot bed. There are two beds, one above the other in each compartment, downstairs beds and upstairs beds. To have beds, that’s good; to go to bed, perfect. However, there is one little preliminary operation which is not performed in public. The men—if they were alone—could easily undress in front of each other; but the ladies—and this, too, is understandable—cannot undress before such a large number of travelers. So the inventor of the sleeping car had to find some means to spare the blushes of the American ladies. He succeeded by making each pair of beds—an upper and a lower—into a single bedroom. Two long curtains run the length of the coach, making a long corridor down the middle. Between each of these curtains and the side of the car, other small curtains are drawn perpendicularly, so that each person in bed is in a little room, with, at his head, a wooden wall, on the other three sides, partitions of cloth. I have known hotels where the cardboard walls were less discreet than the fabric walls of the sleeping cars.

When the preparations are all completed, a rather piquant scene commences. Everyone chooses a bed and slips into the compartment he likes best. Then for several minutes one hears from the neighboring rooms the noise of shoes being dropped or agreeable rustlings which mean skirts are being raised.

When a husband is traveling with his wife, he has a perfect right to sleep in the same compartment with her. This fact was revealed to me by a whispered conversation, very interesting, which occurred in the room next to mine on the right.

Even if you try to be discreet, you cannot help being curious about the neighbors Fate has given you. As a pendant to the married couple on my right, I had a charming girl on my left. She had retired to her room just as soon as the beds had been made and, I must admit to her credit, had betrayed her presence only by extremely discreet movements. Then, the curtain had ceased to move, and the sound of a spring bending under a very slight weight told me that she had lain down.

A few moments went by. I too had stretched out on my bed, but since I was unaccustomed to this kind of hotel on wheels, and kept awake also by my old Parisian habit of going to sleep very late, I was dreaming open-eyed of the strangeness and picturesqueness of this America dormitory. Meanwhile, at my feet, in the long corridor between the curtains I have already mentioned, I could hear people going and coming. Who might these be? I glanced into the corridor and saw—horresco referens—women in their nightgowns—they were the least pretty, to be sure—going to ... I know not where. I saw also a handsome Yankee come from his room. After glancing along the corridor, he went out on the platform and lighted a cigar. A moment later he threw away his lighted Havana and came back inside, but instead of returning directly to his own compartment, he went—you’ve guessed it—to that of my pretty neighbor. 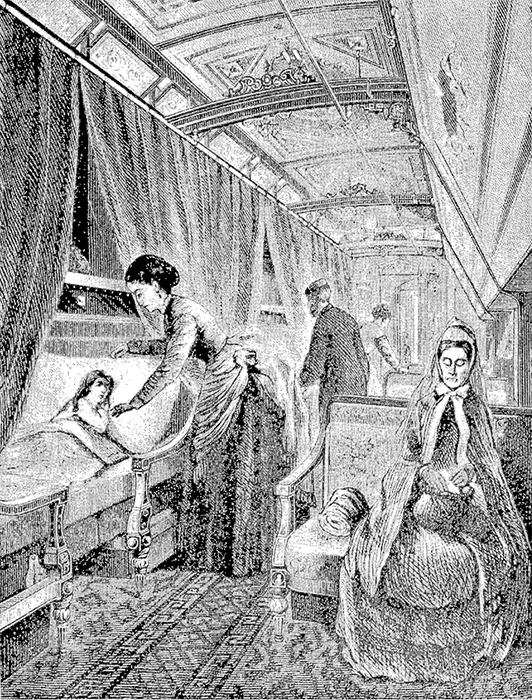 His bursting into the chaste dwelling place of the lovely American provoked a whole flood of exclamations, of Oh’s! and Ah’s!, of remonstrations, whispered so as not to arouse the general attention of the car—all the pretty perturbation of a nest of little birds unexpectedly disturbed. The invader was forced to withdraw, apologizing for his mistake, and the rest of the night passed without further incident.

Scarcely had the rosy-fingered dawn appeared when the two employees of the Pullmann Company also appeared. Men and women got out of bed and made their toilette more or less in public in their cubicles. Then the way was cleared for the porters who in the twinkling of an eye restored everything to normal. After each of us had slept separately, we all met again in the parlor car, just as fresh and reposed as if we had passed the night in a hotel.

At Albany an American gentleman introduced me to his wife and her mother. While we were talking, a man happened to pass, selling fans. I bought two of them for a few cents and presented them to the ladies.

“We will accept them, monsieur,” they told me, “on one condition.” 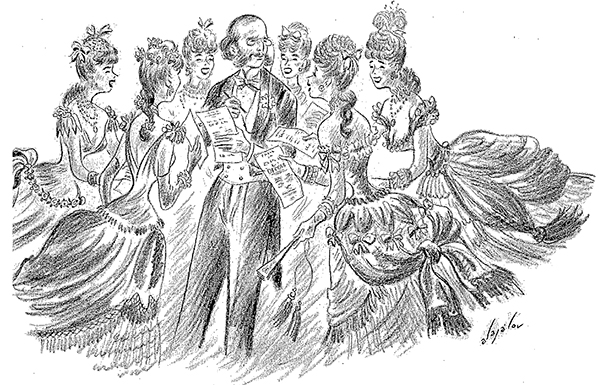 “That you will write your name on one corner of the fan.”

“Ah! an autograph,” said I, and hastened to grant their wish.

The mania which the Americans have for autographs was frequently forced upon my attention. It is a passion which they carry to the point of rudeness. I received during my stay in the United States an average of ten requests a day from every part of the country. I have been accosted, followed, and pursued in restaurants, in public parks, in theatres, and even in the streets by avid collectors who insisted upon a few lines in my handwriting at any price. My calligraphy was at a premium. I received letters of every sort, some of them naive, others ingenious like this one: “Sir, I have made a wager with some of my friends that you were born in Paris. A considerable sum is at stake. Will you be good enough to write me a little note telling me whether or not I have won my bet.”

Another had wagered that my birthplace was Cologne, a third had affirmed that my native place was the small German city of Offenbach, famous for its cutlery. And each letter ended with a request for “a little note.” A certain number of my unknown correspondents went about it in another way. “My name is Michel and I am a distant relative of your brother-in-law Robert. Please send me a little note with news of him.” That fellow did not even know that there is a difference in spelling between “Michel” and “Mitchell.” Then there was the following model: “Sir, I have something very important to communicate to you. Will you see me? Please send me a little note if you will.” I could cite forty formulas of this same nature.

One day an Englishman accosted me as I was dining at the Brunswick Restaurant. “I live in San Francisco,” he said, “and I would like very much to have your name.” As my dinner was drawing to a close, I rose quietly, I gave him my visiting card, and I left him dismayed. I thought I was rid of this character, but the next day as I was entering the dining room, he rushed up, holding a sheet of paper, pen, and ink. In an emotional voice, he cried, “Only your signature! I am leaving this evening. It would give me so much pleasure, I came from so very far away!” How could I refuse a man who came “from so very far away”?

Every request I received contained a stamped self-addressed envelope, and I have saved five or six hundred of these. I warn the honorable gentlemen and the pretty ladies who have made these requests that I have collected their stamps carefully and have sent the proceeds to. a welfare society. I offer them my regrets and at the same time the thanks of the poor.

The Tortures of a Musician