The moment had come. A painful moment for a man who has always lived in Europe is the one when he is about to start on a long journey to a far-off country! So it was not without considerable hesitation that I came to the decision to make the journey I was asked to make.

I left Paris on April 21, my two sons-in-law, my two brothers-in-law, several friends—and my son—accompanying me to Le Havre. I was extremely moved when I went aboard ship the next day. I had tried to make the separation less painful by preventing my wife and my daughters from leaving Paris, but at this moment how I regretted it!

The ship started, and when it passed the jetty and I was able to see my son for the last time, I felt a pang. As the distance increased, my gaze remained fixed upon the little group in the midst of which was my dear child. I could see him for a very long time. The sun made the buttons of his schoolboy coat gleam and indicated clearly to my eyes the place which my heart would have divined anyway....

Here I am aboard the Canada, a fine ship, brand new. It left the dock at eight o’clock in the morning and already we are far from the coast. The boat goes swiftly. Like me, it is making its first trip to America, but since I am used to theatrical premières, I am not afraid of being present at its début.

Allow me now to introduce to you some persons from the crew. A tout seigneur, tout honneur. The captain, M. Franguel, a real sailor, a delightful man, who by his ready wit makes the crossing seem less long to his passengers. M. Betsellère, the purser, has already had the “good luck” to be shipwrecked. He was on the Gironde when this boat collided with the Louisiane and sank. He was saved miraculously and so M. Betsellère is no longer afraid of anything. Whatever may occur, he has seen much worse. A very young doctor, M. Flamant, is also crossing for the first time. Poor doctor! His medicine availed nothing against seasickness. After the second day he no longer appeared at table, and I took a wicked pleasure in asking news of him each morning.

Among the passengers, there is in the first place, Mile Aimée, just returned from a triumphal season in Russia; Boulard, whom I am bringing with me as leader of the orchestra and who has his young wife with him. Mr. Bacquero, a charming American, who, having decided to present me to his compatriots, succeeded by main strength of the dollar in getting me to make this little artistic journey. Arigotti, a fine tenor, a pupil of the Conservatoire in Paris, who when he lost his voice fortunately found a position as secretary to Mr. Bacquero—he plays the piano very well and makes friends even better. Two pretty girls from Philadelphia, some businessmen going to the Exposition, and some exhibitors going for business reasons; then, to end the list, a few travelers without particular importance.

I cannot describe the crossing better than by transcribing a few lines which I wrote to my wife when I landed.

The two first days went very well. The weather was superb. I slept wonderfully well on Saturday during the stop at Plymouth. I had become used to the rocking of the boat, so used to it that on Sunday night, when the ship suddenly came to a stop, I woke up with a start. Not having had any wide experience in ocean crossings, I was afraid that this might be the result of an accident. I jumped out of bed, dressed myself in a couple of seconds, and went up on deck. It was a false alarm. The ship had already started again, but sleep had abandoned me and my confidence with it. I went to bed with all my clothes on, fearful of an accident at any moment, for the ship kept stopping every quarter of an hour. Its propeller no longer functioned regularly.

As if this were not enough, a storm undertook to complicate the situation. For three days and four nights we were horribly tossed about. The rolling and the pitching were frightful. Inside the boat, everything not solidly nailed down was broken; it was not possible either to stand up or sit down.

On Monday I was no longer willing to remain in my cabin, and a bed was made for me in the saloon. The Captain and all the crew were wonderfully kind to me and kept me company all night trying to reassure me in every way. “It is superb/’ the Captain said to me. “The ship plunges in the waves only to emerge proudly after a minute. You must go up on deck and see it!”

“My dear Captain/’ I answered, “to see a tempest from far away must be frightfully interesting to a spectator, but I admit that as an actor playing a part in the piece, I find that its gaiety is less than moderate.”

A characteristic trait of a young American girl who is on board with her sister: At the worst moment of the tempest, at a time when more than one person was saying his prayers and recommending his soul to God (I was not the last, I assure you), the little American girl said to her sister, “Sister, will you go down and get my pretty little hat? I should like to die in all of my finery/’ “Should we bring up your gloves, too?” the younger one asked tranquilly.... 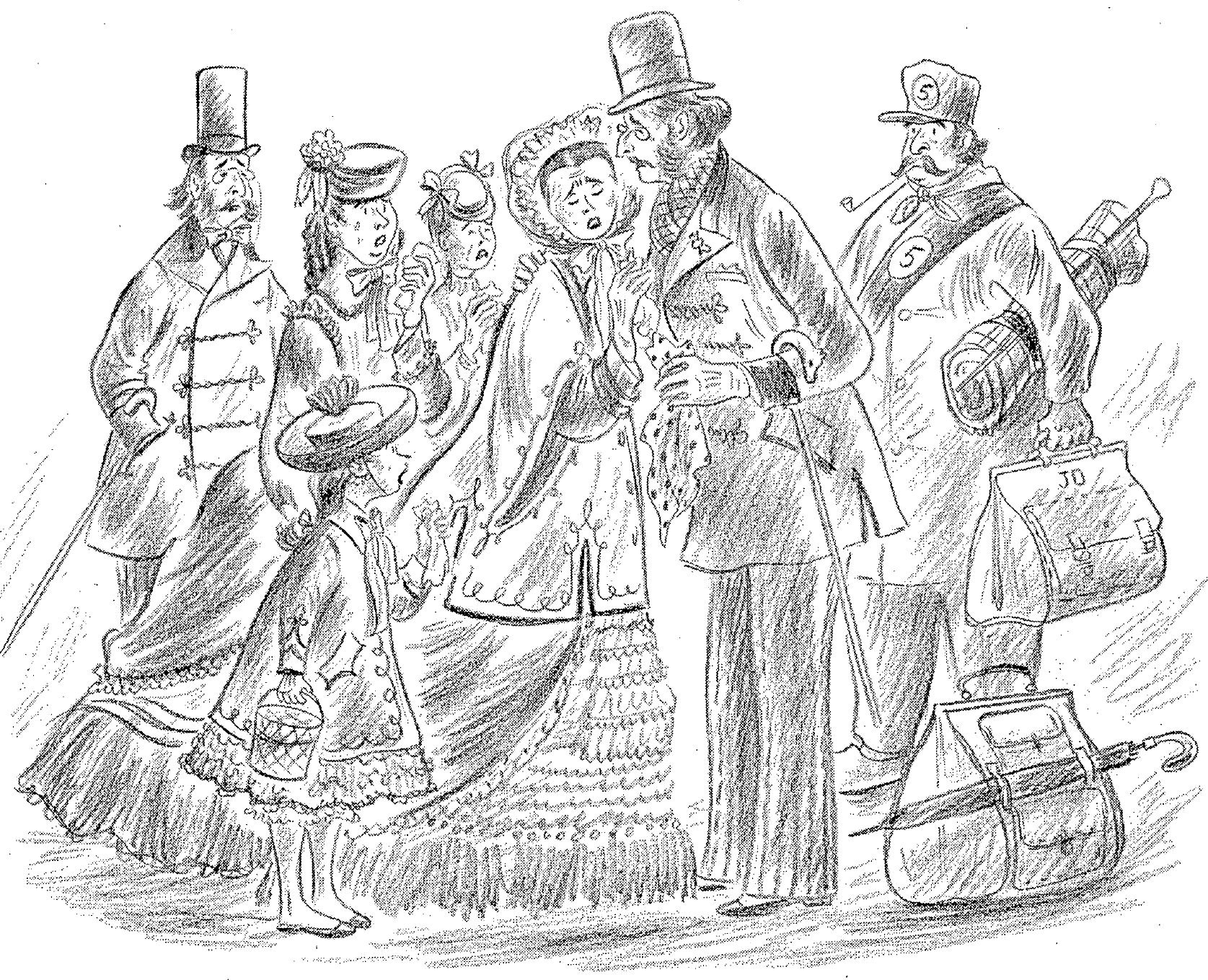 Before entering the harbor, the Canada stopped at two small islands called Quarantine where there is the sanitary inspection and the customs inspection. When a ship has sick people on board, they are taken off to the first of the islands, and when their convalescence begins, they are transported to the other.

Formerly, these two islands were not in existence; the steamers waited for the customs officers and the doctors at Long Island. The customs officers were quite acceptable to the inhabitants, but the doctors annoyed them greatly because of the sick people. The natives found that the incessant importation of people afflicted with the pest, arriving from the four corners of the world, was exceedingly disagreeable. They ended by saying that henceforth Long Island was no longer to be used as a hospital, and even if they had to shoot at the ships, they would no longer allow the sick people to be brought among them.

“But where do you expect us to put them?” asked the governor of the State of New York.

“Put them on that island opposite us. We’ve had charge of them long enough. It’s the turn of Staten Island now.”

The governor found this complaint was perfectly justifiable especially since it was supported by gunshots and gave the order to transport the quarantine station to the other island.

The inhabitants of Staten Island, however, were not content with threats; they revolted, and simply burned the first ships which landed with or without people afflicted with the pest.

The authorities were embarrassed, but no one is embarrassed for long in America. The city coijncil met and decided that since the two inhabited islands were unwilling under any circumstances to receive the sick people, two others would be constructed on which there would be no inhabitants. In a very short time, the two islands which we now see rose from the ocean as if by enchantment. All of America is in this tour de force.

We had been expected the evening before, and a fleet of boats had been organized to come to meet me. Decorated vessels, ornamented with Venetian lanterns, bearing the newspapermen, sightseers, and a military band of sixty or eighty musicians had been waiting for me at Sandy Hook. However, as we were slow in arriving, the boat kept advancing more and more, hoping to meet us. Everybody on board was happy, singing, and laughr ing, the band was playing “our prettiest tunes,” but as they sailed further, the sea became rougher and rougher. The musicians were not the last to feel its effects and so, as in the comic symphony of Haydn where the musicians disappear one after the other, extinguishing their lights, our musicians having nothing to extinguish, instead of pouring out sounds one after the other, all poured out. . . their souls into the sea. . . .

We were soon met by another boat bringing the principal reporters from the New York newspapers. I am sure you understand that I did everything I could not to be completely stupid. Two hours later when we arrived at New York, we were already very good friends. . . .

That evening, returning from the theatre—I visited two theatres the first day—I saw a crowd assembled before my hotel. Electric lights were burning everywhere; one would have thought it was broad daylight. On the balcony of the hotel was written in immense letters: Welcome Offenbach. An orchestra of sixty pieces was giving me a serenade. They played Orphée, La Grande-Duchesse. I scarcely dare describe to you the applause, the cries of “Vive Offenbach!” I was forced to appear on the balcony, just like Gambetta,7 and from there I shouted a formidable “Thank you, sir,” a polite formula which nobody could accuse of being subversive.

On Saturday I was invited to a dinner given in my honor by the Lotos Club,8 one of the best here. Men of letters, artists, businessmen, bankers, many journalists of every shade of opinion. I am sending you the menu of the dinner. . . .

“I had known,” was my answer to the toasts, “that the Americans had long been attracted to me as a composer, and I hoped that, when I should have the honor of being better known to them, they would be just as much attracted to me as a man.” “I am bringing,” I added, “a toast to the United States, but not to the United States tout sec. All the arts and all the peoples being brothers, I bring a toast to the States . . . United to Europe.”

This speech which only emotion could justify was applauded to the echo.

Last Monday I was invited to the Press Club. Nothing but journalists, charming men, all witty—most of them speaking French very well—many having stayed for considerable periods in France.

Many speeches were addressed to me; I answered the best I could.