THE THEATRES OF NEW YORK

One of the first things I did upon arriving in New York was to go to all of the theatres that were still open.

The principal theatres of the city are admirably arranged. All built on the same model, they are the shape of a vast amphitheatre with long rows of rising seats. There are eight boxes in each: four stage boxes on the right, four stage boxes at the left, which are not very popular, most of the time empty, even when the rest of the hall is full. The best society prefers seats in the orchestra and the first balcony.

Very few of the directors have a permanent situation, theatres being rented for one season only, for a month, or even for one week.

An impresario has the right to go bankrupt three or four times, and is not esteemed any the less for such a trifle. The more times he takes a dive, the more times he comes to the surface. One director was pointed out to me who had been honored by six or seven bankruptcies. I was told: “That fellow is mighty clever. Next winter he will have a superb company.”

“But how does he go about finding money?” I asked.

“It’s the people to whom he owes money who lend it to him again in the hope that some day he will have a success and that they will get back ali that they have lost.”

The Academy of Music is the theatre for grand opera. I was not able to inspect it because during the last eight months it had been open only sixty days. For four weeks Tietgens appeared in Norma; then Strakosch came with Bellocca, who was not very successful, in spite of the immense campaign which had preceded her. The most brilliant periods of this theatre were those when Nillsson, Lucca, Morel, Capoul, and Camposini were there.

At Booth’s Theatre they play tragedy, comedy, or opera, according to the fancy of the director renting the hall. I saw Henry V acted by an artist who was not without merit, Mr. Regnold. The mise en scène was beautiful. A week later they were giving on the same stage The Star of the North with Miss Kellogg, who sings in English, somewhere between thirty-two and thirty-four years old and with a very beautiful voice. Meyerbeer’s opera, not having been sufficiently rehearsed, was completely lacking in ensemble work, in the finale of the second act especially. The chorus and orchestra kept chasing each other; a useless pursuit, they never got together. You would think you were attending a mediocre work of Wagner. There was a certain note of gaiety in seeing in the orchestra chairs, among the spectators, a few trombone players and some bassoon players who played a note from time to time. I admit I was intrigued. Who were these musicians? Should they be regarded as amateurs, kindly disposed trombones who came uninvited to help out the orchestra? My uncertainty did not last very long, and a glance was sufficient to discover the cause of this anomaly. The space reserved for the musicians was not sufficiently large, and it had been necessary to put the brass instruments outside the balustrade. 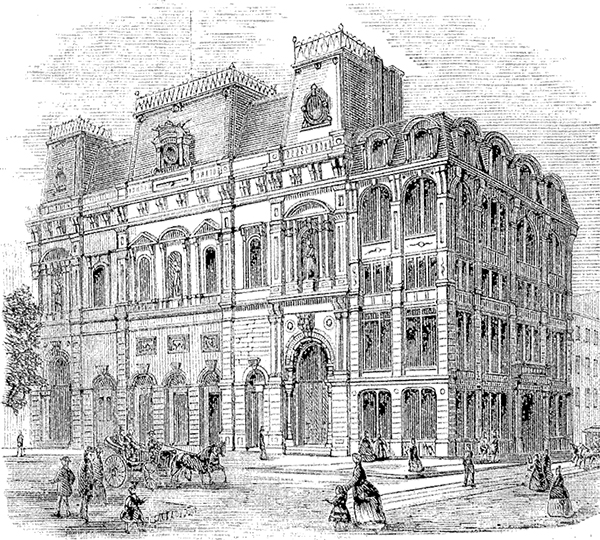 At the Union Square Theatre I saw Ferréol presented in English by a very good company. I attended a performance of Conscience, a very cleverly written play by two young American authors, Messrs. Lancaster and Magnus. I was told that Rose Michel had been played here most successfully.

The evening I went to Wallack’s Theatre the poster announced the four hundredth performance of a drama called The Mighty Dollard. The principal roles were taken by two exceptional artists, Mr. and Mrs. Florence. One of them calls to mind our excellent Geoffroy, and the other our sparkling Alphonsine. This pair of artists, who have been playing together more than twenty years, is greatly loved in America. As for the other actors, they struck me by the perfect ensemble of their work. I noticed especially a charming ingénue, Miss [Josephine] Baker, scarcely seventeen years old, who plays her role of jeune première in a most remarkable fashion. Nor shall I forget another excellent young player, Miss [Ellen] Cummins.

Wallack’s Theatre is directed by Mr. Deutsch, one of the youngest and. cleverest impresarios in New York. To give an idea of what an American director is like, Mr. Deutsch has re-engaged Mr. and Mrs. Florence for four hundred nights, and they are to visit all of the principal cities of the Union from New York to San Francisco, performing everywhere the same play, The Mighty Bollard.

It was impossible to see the Lyceum Theatre, closed for the summer season. Fechter had great success there with La Dame aux Camélias and several other pieces. Dramas with orchestra and chorus have been played there also. It was at the Lyceum Theatre that for the first time the orchestra was placed out of sight of the public, a scheme which Wagner is trying again at this very moment at Bayreuth. The disadvantages of this innovation were very soon evident. In the first place, the acoustics were very bad, and then the musicians, crowded into a cellar and suffering from the heat, cooled off in any way they could. The first evening it was a violin player who loosened his tie and unbuttoned his vest; the next evening the alto horns took off their coats and played in shirtsleeves; a week later all the players were making themselves entirely at their ease. One evening the public suddenly saw a little cloud of smoke coming from the depths of the theater. There was a real panic. The musicians were smoking! This alarm was enough to force the management to get rid, not of the musicians, but of this ridiculous invention. The performers simply put on their evening clothes once more and took their places in the hall.

Another theatre which I was unable to see was the Grand Opera House, constructed by the famous Fisk, murdered, as everyone knows, by his friend Stokes.

This Fisk was one of the most original and outstanding figures in New York. Beginning very low in the social scale (in his youth he sold thread and salve), he became not only the director of the biggest theatre in New York but also vice-president of a railway, commodore of a line of steamers, and colonel of a regiment. He had boldness and energy in all his enterprises and a great originality in his way of acting. Everyone who wanted to be hired by the railway of which he was the director had first of all to enlist in the regiment he commanded. In this way he had gathered one of the finest outfits in New York. Every now and then he took it into his head to call together all of his soldiers and have a gallant parade for the eyes of some beautiful lady. On that day the railway stopped and the stations were closed along the line.

The sumptuous colonel had magnificent carriages and horses, and never went driving except in a fine, big open vehicle drawn by eight horses. There is a love story involved in his tragic death; the great impresario was the victim of a domestic tragedy and double vengeance. Here are the facts. Fisk fell desperately in love with a beautiful American girl and courted her madly. Prodigious shows were given in her honor, parades of the famous regiment, successive stoppages of his railway. He tried everything to gain his end, and naturally he succeeded. Naturally, also, the first thing that Fisk did was to present his mistress to his friend Stokes. Since the time of King Candaule, lovers have always been the same. Stokes had a large fortune; he found the beauty to his taste; and Fisk became . . . the happiest of the three,8 until the day when by chance he discovered the treachery of his friend. I don’t know whether or not his first impulse was to seize his revolver, but I do know that on reflection he abandoned this solution as insufficient. He found something better.

Without showing to his friend Stokes the hatred that he bore him, he appeared to become more attached to him. He brought him into certain business affairs that he was directing, he got him to invest all of his capital in certain stocks that he himself was supporting; then when he had trapped him, he threw the securities on the market, causing a terrific decline, and as a consequence his good friend Stokes was completely ruined.

I believe that Fisk, entirely satisfied with this trickery, later had an interview with Stokes in which he explained the why and the how of his ruin. What is certain is that Stokes, who probably did not appreciate the humor, swore vengeance in his turn. As he had less ingenuity than his enemy, he had recourse to a vulgar, but certain, method of procedure. One day Stokes waited for Fisk to come out of the Central Hotel, where the beautiful American girl lived, and quietly blew his brains out. If Fisk had survived, he would certainly have made a fine drama for his theatre out of the occurrence.

The last theatre to which I went is the Fifth Avenue Theatre, a very fine hall, where they were playing a melodrama, Pique, whose situations have been pillaged from nearly everywhere. The drama is by Mr. Boucicault.

In New York there are also two German theatres and a French theatre, which play occasionally when a director happens to be on hand. This occurs once in a while.

I must not terminate these notes on the American theatres without speaking of a little hall where I heard the Minstrels. The artists are Negroes; the chorus is Negro; the stagehands are Negroes; the man in the box office, the man who takes the tickets, the administrator, all are dark-skinned.

When I reached the theatre, I saw an orchestra, black, that goes without saying, which was playing rather bizarre songs. What was my surprise when I saw that I had attracted the attention of the musicians. All these black gentlemen were pointing me out to one another. I would never have believed that so many Negroes knew who I was and it really flattered me a little.

The spectacle was rather funny so I stayed. What was my astonishment, when after the entr’acte I came back into the hall, to see the same comedy take place all over again with respect to me, that is to say, the musicians pointed me out to each other. This time they were white, all white like the millers in La Boulangère a des ecus. I was more and more flattered. But now see what glory amounts to; I learned that they were the same musicians and that from the director down to the last stagehand, they were false Negroes who blackened or bleached their faces three or four times during an evening according to the needs of the play.