THE HOUSE, THE STREET, THE CARS

I did not stay very long in that Fifth Avenue Hotel where you eat so much and speak so little French. After three or four days, I went to live in a private house in Madison Square. There, too, I was able to see how much the Americans loved their comfort; not only is there central heating in all the apartments, gas in every room, hot and cold water at all hours; but also in a room on the ground floor are lined up three little push buttons which have very great importance.

These three buttons represent for the householder three very important services: the protection of the law, help in case of an accident, the fire alarm. All the service with three push buttons? Certainly, there is no magic in the business. The three buttons are electrical. Press the first and an errand boy appears to take your order; press the second, a policeman presents himself at your door to take your orders. The third button enables you to give the fire alarm and to bring a whole brigade of firemen around your house in a few moments.

And that’s not all. In addition to these three buttons you can, if you wish, have in your office what they have in all the hotels, in the cafés, in the restaurants, even in the shops where they sell liquor and tobacco, that is to say the telegraph. If you ask for it, a little apparatus will be installed in your house which functions from morning to evening and evening to morning giving you the news from the two worlds. A continuous paper strip, unrolling into a wicker basket, allows you to read the latest dispatches from Paris, from the war in the Orient, as well as those about the elections in Cincinnati and St. Louis. At any hour of the day you may learn the rise and fall of the stock market in every country; you know to the minute if you have made a fortune or if you have been ruined.

If the New York interiors are very practical, the city itself is also organized in a wonderful way. The Americans ordinarily do not give to their streets the names of the governing personages nor change these names every time the government changes. Our French custom would be too inconvenient for this republic which elects its president every four years. At the end of twenty years, a street would have had more names than the most copiously named of all the hidalgos of Castile. To avoid the disadvantages which our system would have, the Americans prefer to designate their streets and avenues by numbers: First Avenue, Second Avenue. There is nothing political about this system, and it never changes.

In the public squares, which are magnificent, you see very few statues. Washington has a rather modest one. What a contrast with France where everybody more or less is sculptured in marble or molded in bronze, so that our country begins to resemble an immense museum of men in frock coats, the museum of the Belle-Jardinière! The gods and goddesses of antiquity might get by; they at least have a certain character and are not lacking in imagination; but since we absolutely insist on having statues of women, isn’t it about time to neglect the gentlemen a little and to think more of the ladies whose garments would be much more suited than ours for representation in the plastic arts.

From my window I can see in Madison Square a curious and charming detail. On the upper branches of the trees have been put little houses half hidden among the leaves. They are for the sparrows recently brought from Europe. These little exiled birds are the objects of every kind of attention; the law protects them, you mustn’t kill them; they are respected like the pigeons of Saint-Marc.

Most of the streets are literally crisscrossed by the iron rails which traverse them in every direction. This network indicates the itinerary of the tramways to which New York has given the name “cars.”

The American car does not resemble our Parisian carriage in any way nor even those omnibuses which the Parisians call “American.” In the first place, the number of passengers is not limited. Even though all of the seats in the vehicle may be occupied, there is always room for more. The latecomers stand up, holding on to the straps which hang inside the vehicle. They crowd onto the platform; if need be they climb onto the back of the conductor. As long as there is a platform or a step free, or a knee unoccupied, the conductor does not announce that the car is full. A car which is constructed for only twenty-four people is able to transport three times that many from one end of the city to the other for the modest sum of five cents.

I have spoken of the numerous rails that crisscross the streets. The Americans are clever and have found a way to use them for their own advantage. They have had their private carriages made so that the wheels are exactly the same gauge as the streetcars. In this way they go faster and they fatigue their teams less. They will leave the rails only to pass the heavy vehicles of the streetcar companies. Sometimes the cars come up at full speed behind them before they have had time to get out of the way. But an upset of this kind is quickly remedied; the horses which have fallen down get up, the driver climbs up to his seat without complaining and gets back on the rails again as soon as the car has passed.

The omnibuses which do not go on rails have no conductor to take the money, the traveler himself pays the company for his seat without any intermediary. As he mounts the steps, he puts the price of his trip into a little box placed there for this purpose. I asked an American if the company didn’t lose a lot of money with this system.

“It would cost them much more,” he answered, “to hire a conductor and someone to watch him. The company loses less by relying on the honesty of its clients.” 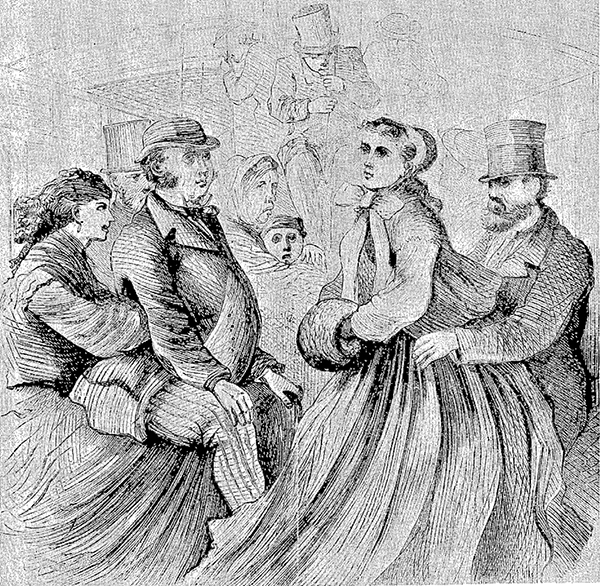 The practical side of the Americans is shown in the smallest details. The little money box I have just talked about has two uses, during the daytime it receives the money, at night it is lighted and becomes a lantern.

I have not yet finished with the vehicles. Most of them are surmounted by gigantic parasols which serve two purposes: first to protect the driver from the terrible heat and second to write advertising on. I was told that every week this monster parasol is changed at the expense of the advertiser.

The popularity of the cars, which are continually passing, is very great, and this kind of locomotion has become a part of American custom. Everybody uses them, even the most distinguished men and women. And, heaven knows, they are right, for hired carriages with one or with two horses are exceedingly expensive. They are comfortable to be sure; they are well-kept, that’s also true; but it’s nevertheless hard to pay a dollar and a half for a ride in a one-horse carriage. Those with two horses cost two dollars. Seven francs fifty and ten francs! And if you are unfortunate enough not to fix the price in advance, the driver will demand seven dollars—thirty-five francs—for a two hours’ drive in Central Park!

If the great number of cars and omnibuses circulating in the New York streets has decided advantages, it also presents serious dangers for pedestrians. So, flagstone crossings have been established where most people cross. A policeman is assigned to this point to see that the pedestrians are not run over. You should watch him doing his job, taking a lady and a child very paternally by the hand and leading them to the opposite side of the street, stopping all of the carriages as they cross. This protection is very much enjoyed by the American women who sometimes make extensive detours to get themselves piloted across the street by an agent of the public authority.

It was explained to me that if you are lucky enough to get run over while you are on the flagstones at the crossing you have the right to a large sum for damages; but if you are unlucky enough to have this happen to you at the time when you are on the pavement, even close beside the flagstone crossing, not only do you not have the right to damages, but in addition the owner of the carriage can demand large damages from you for having delayed his progress.

The Theatres of New York