Wanda Landowska’s successor as harpsichord soloist on the roster of Arthur Judson Concert Management was the American harpsichordist Lewis Richards. No mere successor to the doyenne of early keyboardists, Richards had actually scooped Landowska by being the first to perform a harpsichord concerto with a major orchestra in the United States. That occurred on 4 November 1923, when Richards played the Haydn D-major Concerto with the Minneapolis Symphony, Henri Verbrugghen, conducting.1

Born in St. Johns, Michigan on 11 April 1881, Richards studied piano during his formative years. In 1902 he went to Belgium to study with Arthur De Greef at the Royal Conservatory of Music in Brussels. He won a first prize with distinction in 1905, the first American pianist to attain that honor. He taught for three years in the United States before returning to Europe, where he became very well known as a pianist. His interest in the music of the past led Richards to take up the harpsichord, and eventually he was invited to join the Societe des Instruments Anciens of Paris as a harpsichordist.

Richards was living in Belgium in 1914, when the First World War broke out. Through his friends Brand Whitlock, a United States minister in Belgium, and Hugh Gibson, secretary of the American Legation, he met Herbert Hoover and was invited to join Hoover’s London-based war relief organization. Because of his superior executive ability, Richards became the assistant director of the program. The administrative experience and the friendship with a man destined to become President of the United States were to have a major impact on Richards’s later career.

Richards returned to the United States shortly before his Minneapolis debut in November 1923, bringing his Pleyel harpsichord with him. In addition to the Haydn Concerto he played (in the style of orchestral concerts of the 1920s) three harpsichord solos: Rondo by Rameau, The Brook by Ayrlton, and Gigue by Desmaret (the last two from manuscripts provided by Henri Casadesus of the Societe des Instruments Anciens). Evidently this appearance with the Minneapolis Orchestra was a success, for Richards was at once re-engaged for the following season.

Richards made his New York debut as harpsichordist on 22 January 1924, when he played a recital at Aeolian Hall, assisted by flutist Georges Barrere. In addition to ensemble sonatas by Bach and Handel, Richards played a prelude and fugue, gavotte, and musette by Bach and works by Rameau, Ayrlton, and Desmaret.

All ancient music, all classical, all genuine—this is the sort of program that is proper for such recitals, and, it must be added, it was played in a way that is proper for such music. That is to say, there was no pomp and circumstance attached to it, no affectation, no fancy costumes, no attempt to play to the gallery. This recital was in no sense of the word a vaudeville stunt given with the object of disguising technical limitations and of gaining cheap notoriety. Mr. Barrere is already known as a great musician and a great artist, and Mr. Richards lacks none of the essentials of his art and might very well succeed as a pianist were his passion not for the harpsichord.

The harpsichord is, in other words, not a mere makeshift in this case—a fact that it is necessary to stress for the reason that so many artists take to it or to something similar simply because they find it impossible to meet competition along ordinary lines. Mr. Richards is not of that class at all, but a real artist and a real enthusiast of the harpsichord. His virtuosity is of the first order and he plays the harpsichord not as a piano but as a harpsichord, which is not at all the same thing.

And this instrument thus played will entertain all genuine music lovers. It is quaint and curious, of course, and one understands why it has been superseded by the more robust piano. But one understands, too, the marked difference between the music that was written for it and the music that was later written for the piano. And harpsichord music is as unsuited to the piano as is piano music to the harpsichord.

Let us hope that Mr. Richards will be widely heard, as he deserves to be. His work is of historical and educational significance, and is entertaining as well.2

The impact of Landowska’s recent debut in New York evidently was still with the reviewer of the New York Herald-Tribune:

Lewis Richards, harpsichordist gave a concert yesterday. Once upon a time Domenico Scarlatti who was a famous keyboard wizard of his time, went to visit at a house where, as he entered, he heard the gentle tones of a harpsichord. He listened a minute and then exclaimed: “This is either Handel or the devil!” Hereafter those whose ears are saluted by the sounds of an unseen harpsichord admirably played may exclaim: “That is either Landowska or Lewis.” . . . Richards displayed a finely wrought touch and an airy agility of finger. He was discreet in the matter of dynamics, in which pianists are so often tempted to exaggeration in playing the harpsichord. He presented all his music in a style combining swiftness with delicacy, clarity, and smoothness, and, in short, the correct qualities of his art. His style was that of fastidious student and ardent enthusiast.3

From the New York Times came these kind comments:

Lewis Richards interested a large audience yesterday afternoon at Aeolian Hall in a scholarly recital of music for the harpsichord. His program was more simply and sincerely presented by the young American than is sometimes done by revivers of antique art, who emphasize the antiquity at the expense of the art that has thus endured.4

And from the New York Sun and Globe: “It must be confessed that Mr. Richards did absorbing things with his two groups of solos. He achieves plaintive romance when he wills.”5

Clearly Richards could make music at his reconstructed antique instrument, a gift that is borne out by his several recordings. For the Brunswick-Balke-Collender Company he made a disk of Ayrlton’s The Brook and Rameau’s Musette en Rondeau, and one of Handel’s The Harmonious Blacksmith coupled with Mozart’s Rondo all Turca.6 A royalty statement of 25 May 1926 shows that they sold extremely well: between May 1925 and 31 March 1926 the Handel-Mozart disk sold 4,255 copies. Richards received $.0315 per disk, for a total of $134.03!

Richards gave three recitals with Georges Barrere in January 1926 at Steinway Hall, New York, but the most interesting program must have been the private concert given with Arthur Whiting at the Century Club on 14 January:

a recital for harpsichord and clavichord. . . . It is unfortunate for lovers of old instruments and their music that this was a private recital, because it was the first time since the days long before the invention of the piano that two harpsichords have been played together. . . . In his concerts with Georges Barrere he delighted his audience with the performance of unpublished pieces, and his recital with Arthur Whiting was no less a treat for the small number of privileged hearers.7

Another highlight of 1926 was certainly Richards’s appearance at Carnegie Hall with Walter Damrosch8 and the New York Symphony Orchestra on 26 November.

A goal which he established as a boy of twelve was reached by Lewis Richards, American harpsichordist. . . . Richards lived in Detroit before that city had its own symphony orchestra and the visits of the New York Symphony, with Mr. Damrosch, were events long looked foward to by the twelve-year-old boy. He always attended these concerts and it became his ambition to play some day with the Symphony.

Later, as a student at the University School of Music at Ann Arbor, Michigan, Mr. Richards often had the opportunity of hearing Mr. Damrosch and the orchestra when they came to Ann Arbor to appear on the Choral Union Series which always presented the biggest attractions. . . .

The harpsichordist, who is considerable of an explorer in the field of music, was prepared when the great opportunity came and his long ambition was to be gratified. He had copied the Haydn Concerto in D major, which he played with the Damrosch organization, from the original copy in the library of the Royal Conservatory of Music in Brussels. At that time he took note of the number of instruments originally intended to accompany the harpsichord solo and it was with these same instruments that Mr. Damrosch presented the work.9 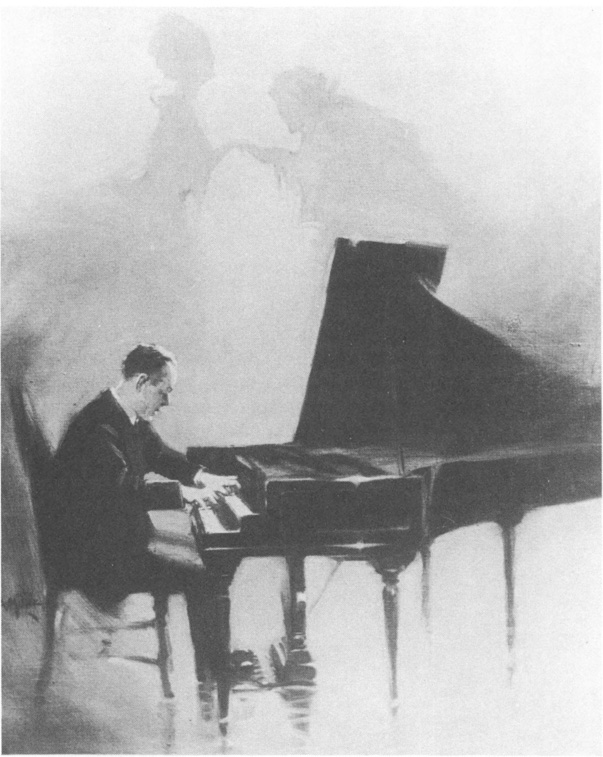 Lewis Richards at his Pleyel harpsichord. (Courtesy of Elsa Richards.)

The ambition realized produced another fine critique for Richards:

Lovely music, because of the absence of any crass modernistic outbreaks, marked the Friday evening concert of the Walter Damrosch band. Lovely playing, too, made the occasion completely enjoyable. . . . Lewis Richards, an American, played the harpsichord, and did so with refined taste, finical musicianship, and unfailing technical skill. He won warm and prolonged applause.10

A full house with four hundred standees in the rear of the Lyric Theatre greeted Richards when he played the same concerto with the Baltimore Symphony in December. The hall had been sold out ten days in advance.11

Lewis Richards may be credited with yet another first for the harpsichord in America: He was the first in modern times to play the instrument in the White House. (When Dolmetsch played there in 1908, he used a clavichord.) No doubt because of his friendship with Herbert Hoover, now serving as secretary of commerce in President Coolidge’s cabinet, Richards was invited to perform on Thursday, 10 February 1927, on the same program with the soprano Elisabeth Rethberg. In addition to his recently recorded pieces Richards played A Gigge (Myself) by John Bull and a Rondo by Rameau. In keeping with a claim in his brochure that he “never had an engagement without a return invitation” Richards played again at the White House on 7 October 1929, following the dinner given by President and Mrs. Hoover for British Prime Minister J. Ramsay MacDonald and his daughter Isabel. The short program consisted entirely of music by old English composers, including the “rollicking tune, Dr. Bull’s Myselfe, by John Bull.”12 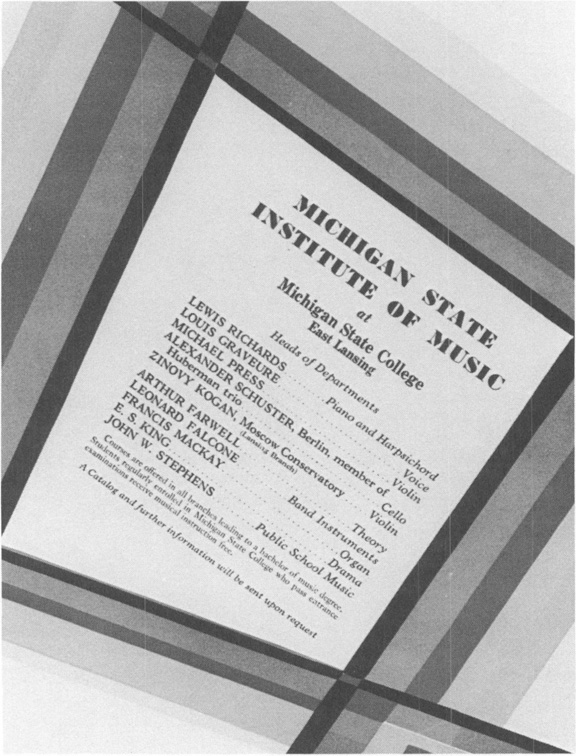 Richards had two other engagements in Washington, both at the Library of Congress. In 1925 he appeared with the English Singers and several string players.13 Then, on 9 October 1929, as part of the Elizabeth Sprague Coolidge Foundation Chamber Music Festival, he and harpsichordist Frank Bibb joined Leopold Stokowski in an orchestrated arrangement of Bach’s The Art of Fugue.

Artistique, a new magazine “dedicated to the arts in Michigan,” appeared in October 1929. It was scarcely an auspicious time in the American economy to launch anything, let alone an esoteric magazine, and the new venture lasted for only one issue. Nevertheless it announced still one more Richards “first”: inside the back cover he was listed as “Head of the Departments of Piano and Harpsichord” at Michigan State Institute of Music, Michigan State College, East Lansing—probably the first harpsichord department in any American institution of higher learning.

Although Richards was the only solo harpsichordist listed in the roster of artists for Community Concerts in 193014 (Stephanie Wall and Fern Sherman were listed as a “costume recital with harpsichord”), his playing career occupied less and less of his time. His duties as director of the Michigan Institute, which he had assumed in 1927, expanded, and his wife’s illness may also have kept him from performing. He died in East Lansing on 15 February 1940.