BY F. A. BISCHOFF

THE GOBLIN on page ii is K’uei Hsing

, as calligraphy represents him on a stele. I purchased the rubbing in 1957, when I visited the celebrated Buddhist caves of Lung-men, south of Lo-yang.1

In fact it is only for reasons of homonymy that pictures of K’uei Hsing are sold at Lung-men near Lo-yang. He has nothing to do with this place. He belongs to that other Lung-men, the defile of the Yel- low River in Shensi, where the southern (downstream) “gate,” Yü- men-k’ou, has been opened by Yü-the-Great himself. Indeed, Lung- men near Lo-yang may be important in art history, but Lung-men in Shensi is famous in Chinese folklore—and therefore it is “the real one.”

The name Lung-men, “Dragon Gate,” refers to an ancient Chinese allegory. During the third moon, at the time when the peach trees are blossoming and heavy rain is falling, the carp that succeeds in swimming upstream through the rapids is instantly metamorphosed into a dragon—but only if the tail of the fish jumping out of the water is struck by lightning. The allegory, exceedingly common in Chinese literature, stands for “Success at the State Examinations.”2 Thus it is obviously proper to sell at Lung-men (it does not matter which one) pictures of K’uei Hsing, since the result of the examination depends on him. One also will notice the three dots at the right hand side of our picture: they may be interpreted as the marks juxtaposed on the exam- ination list to the names of the three best candidates.3

K’uei Hsing is the arbiter of the State Examinations; he is also the god responsible for the invention, not of the principle of Chinese ideogram writing, but of the shape of the ideogram.4 This is presumably the reason why K’uei Hsing is usually represented by a pictorial combination of ideograms. There are a great many types of such ideographic pictures, but the one shown here seems to be the classical one. In its figurative representations, K’uei Hsing always holds a dipper (or a gold bar) in his left hand, lifts his left foot, and if space and material allow, brandishes a writing brush above his head. Among all the calligraphic representations of K’uei Hsing, the one shown on the frontispiece is the only one which faithfully follows these iconographic data developed from this kanji combination.5

The body of our K’uei Hsing is composed of four ideograms:

They form a sentence that allows two interpretations corresponding to the above-mentioned two functions of the divinity:

“Totally right and no private [profit],’’ (a maxim applying to the ideal official)

and, referring to calligraphy:

This twofold interpretation is suggested by the colophon on the left. Taking the four ideograms one by one, the author augments them with glosses, the two first of which allude to calligraphy, the two latter referring to virtuous public officials: 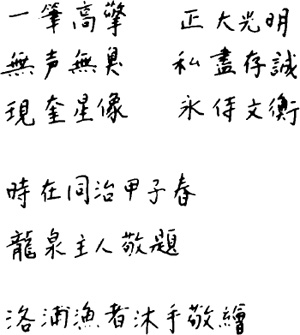 Thus appears the image of the K’uei constellation, agentis forever the

In the Springtime of year Princeps in Commune Regimine the lord of Dragonici Fontis proposed reverentialiter the topic.

Piscator from the bank of the Lo River purified his hands and drew reverentialiter the image.

And the colophon on the right reads

The coenobite Oceanrain, the Prior, outlined the contours on the stone. The stonemason Liu T’ien-yu hewed it.

This translation is not aimed at appealing to the taste of modern readers, but at rendering the flavor of pedantic learning proper to the original: the words that are quotations are translated into Latin; Greek is used where Latin pedantry proved insufficient. The result of this experiment—a pasticcio of the style cherished by Renaissance humanists—comes as close as any possible to the original. But only as far as the exterior aspect is concerned. As soon as one considers the translation more in depth, it appears that it drags desperately behind because of the respective quality of Renaissance and Chinese technique of quotation: the former is superficial, the latter is artful. Even great Western humanists were perfectly satisfied when they succeeded in fitting into their own prose classical scraps regardless of the original context. On the contrary, a good Chinese quotation supposes the reader learned enough to remember at once and to recite mentally the entire passage from which the quoted words were extracted. Therefore in Chinese, the quotation is a major, an authentic tool of literary art: handled by a master it deepens the meaning to an extent unmatched, except by a few Western writers (T.S. Eliot, for example) since the Renaissance. Alas! To overlook a Chinese quotation means usually to miss the point.. . our help is in the P’ei Wen Yün Fu, that absolutely stupendous corpus of Chinese literary quotations.7

As for our colophon, the three major quotations are perfectly well chosen, possess so rich a meaning that a fairly long commentary is needed to elucidate its main aspects.

• The gloss on absque

• The gloss on proprio

is a quotation from the Book of Changes (Wilhelm, The I Ching, vol. II, pp. 12-13) with its first hemistich reworded according to the needs of the context. This allusion is so well chosen—with the “dragon” that refers to Lung-men and its allegorical meaning, the ideogram chéng

that recalls the maxim, and all the moral development outlining the ethic of the ideal official—that it deserves to be quoted in extenso:

Nine in the second place means: “Dragon appearing in the field. It furthers one to see the great man.” What does this signify?

The master said: This means a man who has the character of a dragon and is moderate and correct. Even in ordinary speech he is reliable. Even in ordinary action he is careful. He does away with what is false and preserves his integrity. He improves his era and does not boast about it. His character is influential and transforms men.

My translation follows the less specific wording of Couvreur.8

used in the colophon is the proper designation of the eponymous star of the divinity. Yet the divinity is usually designated by another kanji fit

, also pronounced k’uei , but combining the ideogram “demon” and the ideogram “dipper.” Widely accepted folklore has confused the stars and the god and has reduced the two ideograms of k’uei to synonyms.9

• “A gentis forever the

gubernaculum” : this passage, obviously the pride of our glossarist, must have been felt to be incredibly beautiful:

a) K’uei Hsing is the patron of examinations, and it is certainly proper to state that “he holds forever the steelyard of Literature,” or that “he is the elegantiarum arbiter ” (to speak with Tacitus! ).

b) Since the ideogram

means not only “steelyard” but also “beam, handle,” the author certainly intended to allude to the “handle” of the Big Dipper also. The constellation is called the Jaden Beam

, “design, ornament, elegant.” By changing the context, the author gave “yoke,” the meaning of “steelyard” and

becomes “literature.” The reader must forgive me if in my translation I could not move closer to the original ambiguity.

• The “year Princeps in Commune Regimine” is 1864 A.D. (The period T’ung-Chih[“Joint Government”] lasted from 1862 until 1874; the year Chia-Tzu is the first, eponymous year of the sexagenary cycle.)

• Not much can be said about the four persons mentioned in the colophons. One may assume that the rubbing was taken from a stele located in the vicinity of Lung-men near Lo-yang. In this case the “Fisherman from the Bank of the Lo River” may have been a retire litteratus-oficial10 of the very provincial town which the once glorious Lo-yang has been for many years. But it is also possible that the stele stands at “the real” Lung-men, in Shensi, and that a modest peddler has brought the rubbings to the other Lung-men, near Lo-yang, where they can be sold. In this case, the Lo river mentioned would be the river flowing parallel to the Yellow River, a short distance to the West. Dragon Fountain can also be located in the region of Lung-men in Shensi: these is a “Market of the Dragon Fountain,” Lung-chüanchen

, located about fifty miles northwest of Yü-men-k’ou, halfway to the Lo River. Thus the “lord of the Dragon Fountain” may have been some rich man of that village.

The seal on the upper part of the rubbing presumably gives some valuable information. Unfortunately, it cannot be deciphered.

3. This, however, is only one interpretation. Professor Fred Wang, Seton Hall University, was kind enough to tell me another meaning: the picture as a whole represents the favorite divinity of the mandarins, the Big Dipper. This constella- tion is composed of seven stars: the four that compose the “dipper” itself are called K’uei

and the three of the “handle” are called Sho

. K’uei being represented by the goblin, the three remaining stars are shown separately by the three dots. Cf.Dai Kan-Wa Jiten, XII, 45785, 43.1 wish to express here my gratitude to Professor Wang for his enlightening explanation.

4. Cf. the Li Tai Ming Hua Chi of Chang Yen-yüan as quoted by Oswald Siren, The Chinese on the Art of Painting (Peiping, 1936), p. 224. The above mentioned two functions of K’uei Hsing are closely related since good handwriting (“good” according to esthetical as well as graphological criteria) was a prerequisite for any of the official Chinese examinations.

5. Cf. Henri Doré in note 1. The technical term for this representation is “K’uei Hsing Kicks the Dipper”

. It symbolizes “a laureate of the State Examination.” Cf.Dai Kan-Wa Jiten, XII, 45785, 29. I owe this reference to Professor Wang also.

6. It is well known that every kanji stroke traced with a writing brush has to be “correct’’—that means “perfectly clear”—at the “first” touch. But to the reader unfamiliar with the technique of brush writing it may be amusing to know that even a good calligrapher does not always attain “great clarity.” Ordinarily the stroke turns out not to be quite as fine as expected. The disappointed artist is then tempted to mend the strokes, fattening them here and there in order to improve the balance, the proportions of his unfortunate kanji : these changes are precisely the “secret [corrections]” forbidden by the rules of the art. The easiest way to detect them—a method used especially by schoolteachers—consists in screening the page with the recto turned to the light. By observing the verso the corrections appear clearly as fat or lean borderlines to the body of the strokes.