IN THE realm of literature the universal language of humanity can transcend all differences of nationality, historical period, genre, and taste. The literatures of East and Central Asia extend and enrich this language, but they are presently almost unknown to the people of the modern West. The publication of this first volume of K’uei Hsing is an attempt to introduce Western readers to the remarkable diversity and complexity, as well as to the humanity, of Eastern literary traditions. China, Japan, Mongolia, and Tibet are represented here in a wide variety of ancient and modern literary forms encompassing poetry, the short story, essay, folk song, and Jātaka tale, but our initial emphasis is on Chinese poetry.

K’uei Hsing opens with the shih poems of Lu In, a ninth-century writer who died in such poverty that his funeral had to be paid for by a friend and patron. Also included are a wide selection from the tz’u lyrics of Hsin Ch’i-chi, a twelfth-century poet much admired by his countrymen for his erudition and versatility; and forty of the somewhat less elegant but highly symbolic fourth-century love songs of Tzu-yeh (Lady Midnight). The fu, or prose-poem of Hsiang Hsiu (third century), one of the Seven Sages of the Bamboo Grove, laments the passing of his dead friends, seeing his own fate in theirs. The last poem in this section is a rendering in English verse from a Chinese manual on the art of painting, originally written in prose. That such an exercise occurred to a skilled translator suggests that a poetic quality of the Chinese language may occasionally highlight a book of practical instruction.

Selections from two modern Japanese poets are included. The translation of four poems by the young poet Tanikawa Shuntarō reveals the strongly Western influence in his art. An American poet has collaborated in a free rendition of Kusano Shimpei, an ultra-modern among moderns. In contrast, the example of Tibetan love poetry was composed by the august leader, the Sixth Dalai Lama.

The prose selections in this volume are equally diverse. Ssu-ma Kuang’s instructions to his son expound the moral virtues of frugality. The writer is an eminent eleventh-century Confucian historian. The charm of the intriguing descriptive essay on a bamboo pavilion, written in 999 by Wang Yu-ch’eng, an official in exile, is matched only by the poignancy of its symbolism. The seven folk tales from ancient Japan (mid-tenth century) were considered by scholars of their day to be “frivolous women’s stuff,” yet they are among the few examples of popular prose writing to have survived from that time. The Mongolian tale of the Jātaka type translated here tells of the great Buddha in one of his previous incarnations; throughout the story, the faithful gain in devotion and understanding. And from the pen of Lao Shê, the author of The Rickshaw Boy, comes a modern tale, rich in irony, about two bourgeois Chinese couples.

The diversity of materials and contents in this volume is matched by the diversity in the techniques and methods of translation employed by the contributors. Their several approaches to the translation of poetry may cast some light on the knotty problems of translation. All translation involves risks and compromises which in unskilled hands can misrepresent the original. Perhaps nowhere else is this difficulty more obvious than in Chinese poetry since each Chinese poem (shih or tz’u), while restricted to a fixed number of words in each line, is governed by strict rules of prosody such as the alternation of words in opposite tonal patterns, the use of caesuras, balanced expressions, end rhymes, alliterations, etc.

To illustrate in more detail the prosody and rhyme scheme of the Chinese poem, poem E4 by Hsin Ch’i-chi is shown below in three stages of translation. The original form of the poem in Chinese characters is followed by a modern Mandarin transliteration. Tonal marks are added to the transliterated version which follows the Wade-Giles system. These marks, ՝׳ ՝, indicate the first, second, third, and fourth tones. The word-for-word translation is given below each line. Where a compound occurs, necessitating the use of only one English word, or where grammatical particles are left out, the equivalent terms appear in a parenthesis. The tune-pattern (“West River Moon/H sichiang-yüeh”) of this poem has two stanzas, each of which contains four lines, six characters in lines one, two, and four, and seven characters in line three. The rhyme scheme requires that three of the four lines rhyme but with two different sets of rhyme-words—one in the “even” tone (i.e., the first or second tones) and the other in an “oblique” tone (i.e., the third or the fourth tones). Thus, using a lowercase letter to indicate a rhyme-word from the oblique tone group and an upper-case letter to indicate a rhyme-word from the even tone group (with x standing for unrhymed words), the form of this tune- pattern can be diagrammed as: 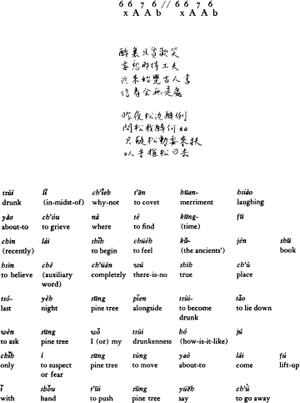 The task of the translator is to render the original as closely as possible into a readable English form. Below we have Irving Lo’s version of the poem.

While drunk, I knew only to laugh and make merry;
Where’s the time to grieve?
Lately, I’ve come to know ancient tomes,
To believe in them was all wrong.

Last night I lay drunk by the pine tree,
And I asked the pine, “How drunk am I?”
Half fearing the pine was moving to lift me up,
With one hand pushing the pine, I said, “Go away.”

This, of course, illustrates only one method of translating from Chinese poetry, but although the translations in this volume vary greatly in form and in style, they all adhere to one general guideline: to present the thought content of each poem and also the nuances of words.

While the emphasis of the K’uei Hsing venture, and of this volume, is the presentation of hitherto unavailable translations from East and Central Asian literatures, we feel that the short introductions before each selection, generally critical and historical in nature, are necessary. Translations are occasionally followed by a separate set of notes, which include the explanation of literary allusions and references. These allusions, much loved by poets of the Orient, often prove baffling to those not brought up in the traditions of the East.

We hope that this volume will take our readers on a pleasurable journey to the wonderful and strangely hospitable domain of the literatures of the Orient, the realm of our Lord K’uei Hsing.