Aleksandra Molas, nee Purgold (1844-1929), a singer, participated in the evenings at the home of Dargomyzhsky, Shestakova, and others. She was one of the best performers of Musorgsky’s works.

My acquaintance [with Musorgsky] did not last very long, barely ten years, but it left an indelible imprint on my whole life; it had enormous influence on my singing and it provided me with many bright and wonderful moments. I met him as well as the other Russian composers, at the end of the sixties, at the home of Dargomyzhsky when he was composing The Stone Guest. The very next day Musorgsky brought me his songs and drafts from Boris Godunov.1 Later, after I was married (Musorgsky was my shafer [he held the crown] at my wedding), he developed the habit of coming to our house often, and thus he became a very good friend of my husband’s.2 At first, M[odest] P[etrovich] was very much afraid that my marriage would interfere with my singing, and he was unhappy with the changes it brought into my life. But very shortly, he was convinced that not only had I not abandoned my singing but that I had begun to work at it much more than before and much more seriously. Soon, a nucleus of young, talented composers was formed. They would meet at our house two or three times a week; they would bring me everything new they had composed, and Musorgsky and I would perform those works while they were still in manuscript form. Our constant guests were V[ladimir] Stasov, Borodin, Cui, Rimsky-Korsakov, Shcherbachev, Lodyzhenskii, and later Glazunov3 and many others.

I was on very friendly terms with Musorgsky; nonetheless he never talked to me about his youth. It was obvious that he was not satisfied with the way he had spent it. On the other hand he liked to talk about his childhood, how he grew up in the country, on his father’s estate—it was one of his fondest memories. Later on, he was in the military; and it seems that for a time he fell under the influence of bad examples and damaged his health for the rest of his life. I met him when he had already resigned from the military and was living in extremely straitened circumstances. I know that he gave his elder brother his father’s estate, saying: “My brother is married, he has children, as for me, I will never marry and I can make it on my own.” Unfortunately, he did not live long enough to see the time when he would be fully understood and when his works would be rightfully valued.

M[odest] P[etrovich] was very ugly, but his eyes were amazing; they were so intelligent and so full of thought; only people with great talent have that kind of eyes. He was of medium height, nicely built, graceful, educated; he spoke foreign languages beautifully; he recited excellently, and he also sang, although he had almost no voice; still he sang with remarkable feeling. . . . He was invited everywhere, and he was the soul of the party. He liked children very much and tried to understand them, but he was afraid of the very young ones: he thought he could hurt them. Children understood that and also liked him a great deal.

When he compelled me to sing The Nursery for the first time, I was terribly afraid that I would not succeed with my rendition. But he told me afterwards: “That was exactly what I had in mind. You understood me beautifully; keep on singing it exactly like that, don’t change the intonation or the expression, and I will be fully satisfied.”4 After that, I constantly sang it at our musical gatherings and in many concerts, always with great success. Generally speaking, whenever I sang his songs, they were successful, especially since Musorgsky was an exceptionally good accompanist and since he always accompanied me in public.

During the last years of his life, M[odest] P[etrovich] came to our house especially often: three or four times a week. He would come for lunch and would then stay all evening. My children shouted enthusiastically: “Musorianin is here, hurray!” After lunch, he would take a short nap in an armchair, and having rested, would sit down at the piano and let his imagination run free. Many portions of Khovanshchina and The Fair at Sorochintsy were composed in our house. M[odest] P[etrovich] always said that in our house he was able to rest his soul from a hard and distressing life. By nature Musorgsky was a remarkably delicate, gentle man; and in his works, despite seemingly rude, typically Russian expressions, there was never a feeling of impropriety. He did not think that everything Russian ought to be coarse, and he did not like it when performers underscored the rude expressions. Such an attitude is understandable when one considers that everything he composed was talented, realistic, and always apposite.

Musorgsky loved nature passionately. When he came to our dacha, in Pargolovo, where V[ladimir] V[asilievich] Stasov also lived, our big group would go on long outings, some of us on foot and some in carriages. I always rode a horse, since I loved horseback riding. . . . M[odest] P[etrovich] preferred to walk and look for mushrooms, which reminded him of his boyhood, and he always naively rejoiced when he came upon a good mushroom patch. He particularly liked sunsets, and we often watched them together. He had such an amazingly delicate and poetic soul! M[odest] P[etrovich] could not bear to see a fish caught on a hook. He said one should catch a fish with a net so that the fish would not suffer unduly; one should always avoid harming any living creature, and one should not cause suffering either moral or physical.

Intrigues and troubles were a terrible burden on Musorgsky. He was sick more and more often, and his nerves were utterly shattered. He became seriously ill in 1881; the illness lasted a short time. His weakened and exhausted constitution was unable to overcome the affliction, and he died in the hospital, surrounded by his close friends, on his birthday, March 16/28, 1881, at the age of 42. M[odest] P[etrovich] died during the night; the nurse’s aid who was with him told us that he suddenly uttered in a loud cry: “Everything is over. Oh, poor me!” 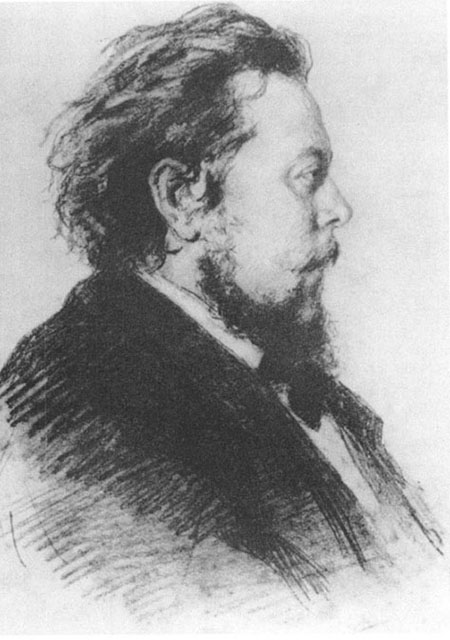 Portrait of Musorgsky by S. Aleksandrovskii