Četkarev stresses the supposedly great regional differences among groups of Cheremis, but does not specify the distinctive musical traits of each group.

Other indications of regional differences can be gleaned from some of the studies which discuss Cheremis music. Szabolcsi considers some of them as indicative of influences from other cultures. The more one moves eastwards among the Cheremis, the more pentatonic scales one finds. The further west and north one moves, the simpler become the style and, particularly, the tonal material. These findings indicate that Cheremis music has probably undergone a great deal of influence from other peoples for many years.

A group of songs in the repertory of the Cheremis living in the Bashkir ASSR, called takmak songs, a name derived from Tatar, are described by Četkarev (p. 26) and Karmazin (p. 380). Četkarev describes them merely as short songs. According to Karmazin, however, these songs are clearly an importation from the Tatars and show the degree to which some Cheremis have been influenced by the musical styles of their neighbors.

6.2. Cheremis Music Compared to Neighboring Styles. The Cheremis style, that is, that style which characterizes the songs in the older collections, and which is most widespread and representative in the Cheremis repertory, has some features in common with many styles of folk and primitive music throughout the world. In a number of cases, these similarities may be due to coincidence, or to the fact that a number of things about Cheremis music (especially the anhemitonic pentatonic scales) are not specialized and are generally widespread. However, some of the most specialized features of Cheremis music bear consideration from a comparative point of view, based on the author’s analysis of comparative material listed in the Bibliography.

The Cheremis share musical features primarily with two large groups of musical styles. One includes those of some Finno-Ugric groups (Mordvin, Votyak, Zyrian) as well as of some Paleo-Siberian cultures, and is characterized by restricted scales (few tones), and forms which are almost exclusively repetitive — those which have been referred to as the litany-type in this study. (See the works of Lach in the Bibliography.) To the other group belong some of the non-Finno-Ugric styles which are geographically close to the Cheremis, and are more elaborate in rhythm and form, having strophic structure. These styles are found among Eastern European groups (Slavs) and, for that matter, Western European, and evidently at least some Altaic groups, judging from an examination of Chuvash and Mongol songs. In addition, there are some striking similarities between Cheremis songs and some North American Indian music — similarities which are interesting to note but which should not at this point be interpreted in any but a purely descriptive way (see Nettl, North American Indian Musical Styles).

We wish to discuss three elements of Cheremis music here in a comparative fashion: a relatively rare but geographically widespread scale type, pentatonic, but different from the anhemitonic kind which is so common in Cheremis music as well as elsewhere; transposition as a guiding principle in form; and the litany and semi-litany form types.

The above mentioned pentatonic scale has one minor second, two major seconds, one minor third, and one major third. In Cheremis music, although present in only a few songs, it is found with every degree of the scale as the tonic. Szabolcsi, p. 143, gives the distribution of this scale in Eastern Europe and Asia, with various degrees as tonic. His table is reproduced here in part, the tonic designated by a capital letter in each case. 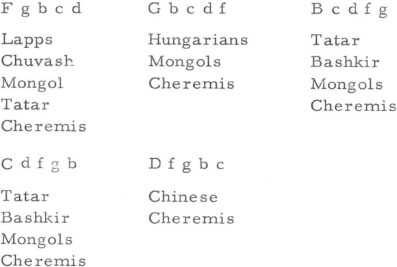 Moving closer to the Cheremis, we find transposition also present in Asia, as Fig. 42, a song of the Buriat Mongols, indicates. Here transposition is to a level removed a perfect fifth from the original, as is very common in Cheremis music. Though not as common as in Cheremis songs, transposition is also found in many Hungarian folk songs, as indicated in Fig. 43.

We may conclude that the Cheremis are relatively close to the Western boundary of the distribution of transposition to fourths and fifths, although a somewhat similar phenomenon is found in European cultivated music, especially in that of the 17th and 18th centuries. These two manifestations of the same phenomenon can hardly be considered historically related, however. In Central and Western Europe, transposition is usually to levels a second or third from the original, and the over-all flavor of these two kinds of transposition is quite different.

Finally, some aspects of form are of interest here. The semi-litany type of form, represented by the letters A B C C C or A B B B, is not found with any great frequency in musical styles other than the Cheremis. The litanytype form, in its simplest stage, is found among the Mordvin, Zyrian, and Votyak, as indicated by the songs in Fig. 44, each of which comprises an entire song. The litany-type form is also present in many other cultures, sometimes constituting the entire repertory, but usually making up only a part of it, namely, children’s songs, lullabies, songs in tales. The semi-litany type of the Cheremis is something of a combination of the litany-type proper with strophic forms of the progressive variety. This places the Cheremis in an intermediate position, musically, between the Finno-Ugric groups to the North (litany-type) and the Chuvash to the South (progressive strophic form). Thus the semilitany type may, historically, have been derived from the pure litany-type subjected to the influence of the more complex strophic form type. 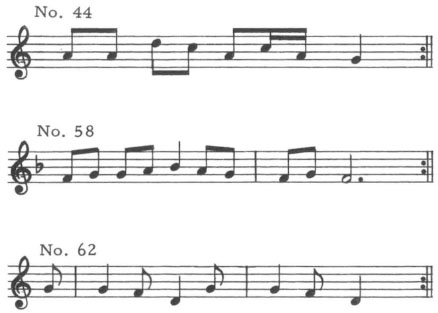 6.3. Theories of Cheremis Music History. In this section, we summarize three theories which bear on Cheremis music history, and add some remarks based on them and on the writer’s own findings. Lach’s study (Tscheremissische Gesänge) is written largely from the point of view of the evolution-of-culture school of anthropology. Lach does not attempt to indicate the sources of certain features of Cheremis music; he is content to place it in a worldwide category of music history. His assumption is that all musical styles go through certain stages and that the historian merely observes various stages at the same time because some of them evolve less rapidly than others. He is satisfied to indicate the rung on the ladder of musical development which a particular style has reached; considerations of historical relationships among musical styles are implicitly recognized but irrelevant.

According to Lach, Cheremis music is one step removed from the simplest of all, which is symbolized by the litany-type. The Zyrian and Mordvin he considers as among the simplest, since they have the litany-type in most of their songs. The semi-litany type of the Cheremis is next in simplicity. Immediately above the Cheremis he places those peoples who have strophic forms, including the Turkic peoples, e.g., the Chuvash. This classification, although not realistically historical, coincides with the findings of Szabolcsi (see bibliography), who represents a more phenomenological point of view.

Szabolcsi bases his theory on a song type common in both Hungarian and Cheremis music, that which is strophic and based on the scale G-b-c-d-f, contains four lines, ornaments, and rubato styles of singing. This, he finds, is present in no Finno-Ugric group north and directly east of the Cheremis, but is found among the Turkic peoples, including the Tatars, Chuvash, and Bashkir, as well as in Mongolia. He also stresses the similarity of this to some Chinese cultivated music. Thus he believes that this song type originated in Central Asia and was carried westward in the time of the Great Migrations by Turkic peoples, and diffused from them to the Hungarians and Cheremis. He believes that most of Cheremis music has a Turkic background.

Kodály (“Sajátságos dallamszerkezet ... “), on the other hand, interprets the similarities between Hungarian and Cheremis music as coming from a prehistoric FinnoUgric tradition. He bases this largely on the main common feature of the music of these two peoples, namely, the use of transposition to levels a fourth or a fifth removed from the original. Since transposition is not common to all other Finno-Ugric peoples but is found among some Turkic ones, this interpretation is open to criticism. Kodály later (Die ungarische Volksmusik) revised this view, stating that the Old Bulgarian heritage, common to both the Chuvash and the Cheremis, is responsible for the parallels, and that those two styles often cannot be distinguished.

From the above theories, and from the comparative remarks preceding them, the following tentative conclusions can be drawn about the history of Cheremis music. Continuous contact with numerous musical cultures is probably responsible for the features in existence today. The fact that Cheremis music differs considerably from that of most other Finno-Ugric peoples is evidence of the constant changes in and additions of materials to their style.

The history of Cheremis music seems to have been largely oriented towards the East. Few, if any, contributions have come from the West, from Slavic and other Indo-European peoples. Those features which the Cheremis share with the European folk styles are those which have an almost universal distribution and thus can be assumed to be the most archaic. They are the use of anhemitonic pentatonic scales and the monotonic and ditonic children’s songs.

Some of the Cheremis features may have been influenced by Turkic peoples like the Tatars, and perhaps the Chuvash. The typical form of the Cheremis, the semi-litany type, seems to be a combination of the litany form of the simpler Finno-Ugric styles and the strophic forms of the Chuvash and Slavic peoples. The pentatonic scales with one half-tone are also probably borrowings from Turkic tribes, according to Szabolcsi, since they have more widespread distribution in Central and East Asia.

The use of transposition is probably an importation from the East, since the distribution of this trait is towards the East. The Turkic peoples may be a bridge over which it traveled from a more eastern Asian home to Europe. If the practices of transposition among the Cheremis, Hungarians, Mongols, and North American Indians are historically related, they must indeed be ancient, since they are very widespread among the Indians, mainly in areas South of the Eskimos, areas whose inhabitants have probably not been among the most recent arrivals in North America.

The Cheremis do share one important trait, at least, with the Mordvin, Votyak, and Zyrian, namely the litany-type form which appears in a number of songs aside from the semi-litany type. The litany-type is probably very archaic because of its association with simple melodies and rhythms, and its wide distribution. According to Kodály (Die ungarische Volksmusik), there was at one time a close tie between Cheremis and Hungarian folk music. As evidence, Kodály gives a number of variants of the same songs in the Hungarian and Cheremis repertory, indicating a common Finno-Ugric heritage. Some of these parallels are strikingly similar, while others show only a general similarity which could be interpreted as coincidence coming about through general stylistic similarity. Practically all of the Cheremis-Hungarian parallels occur in melodies in which transposition plays a part. Thus we have an indication of the relative age of this composition device in both repertories.

The question of the history of Cheremis music has obviously not been solved. All of the statements made in this section must be considered tentative and are subject to revision as more information becomes available, particularly on the music of the Turkic and other peoples neighboring the Cheremis. However, it seems safe to conclude that contact with Turkic peoples has played an important part in Cheremis music history, that some simple elements have been discarded, some transformed under the impact of outside influence, and some allowed to remain, and that the various traits of Cheremis music originated in various parts of Eurasia. 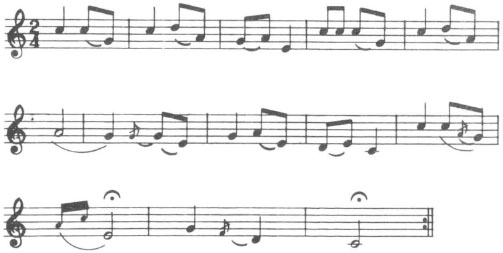