The dominant musical style of the Cheremis is relatively simple, and corresponds in this respect to some of the simpler styles of folk and primitive music, although, except in children’s songs, it does not approach the extreme simplicity of some primitive styles. For the most part, there is nothing in Cheremis music which is not found with considerable frequency in some other styles of folk and primitive music. In the following summary, which will serve to integrate the foregoing discussion, the main features of Cheremis style are described.

The melodic movement and the range are rather diverse. Undulating and gradually descending, as well as occasional ascending, movement is present. The scales are predominantly pentatonic, with somewhat more than half of them anhemitonic. Minor thirds and major seconds are the most important intervals in both scale and melody. Large leaps, like fourths, fifths, sixths, and octaves, occur somewhat less frequently.

Most of the Cheremis songs are isometric, and the vast majority are in quadruple meter. About three durational values for each song is average. The rhythm is relatively simple; there are no great contrasts between very long and very short notes. Notes of the same length appear sometimes in groups of two or four, but not in longer series.

Ornamentation is fairly common and is built from the same melodic and rhythmic material as the rest of the song. It consists of turns, trills, and grace notes. The vocal technique of the Cheremis is fairly relaxed and non-pulsating, approximating that of much of European folk music.

The forms of Cheremis music are primarily iterative and reverting. Progressive forms are rare. Two types are characteristic: in one type a section is followed by another section which is repeated a number of times, such as in the example A B B B B; in the other type transposition occurs. Transposition is found in well over one-fourth of the songs and, where it occurs, the transposed section is almost always at a level removed a perfect fourth, fifth, or octave from the original section. In about two-thirds of the transposing songs all sections of a song are transposed. The Cheremis songs are strophic, each strophe taking on the average about twenty seconds, and they consist of between four and eight sections of approximately the same length. Two or three different sections or phrases, plus their repetitions and modified recurrences, make up the total of four to eight sections which constitute a strophe.

The text settings in Cheremis music are almost invariably strophic. This means that an entire song is repeated several times with a different strophe of the text each time. A textual line usually corresponds with a musical one, so that musical as well as textual lines of various lengths occur in the same song.

The text settings, in regard to the way the individual syllables are treated, are traditionally classified as syllabic, with each syllable occupying a separate note; as neumatic, with each syllable occupying two, or occasionally, three notes or as melismatic, with many of the syllables occupying a large group of notes, in some cases (such as certain medieval European music), several dozen. The Cheremis songs are syllabic or neumatic; melismatic songs have not been found. In a typical song (Fig. 51, p. 95) fourteen syllables illustrate the neumatic style, each syllable extending over two notes; the remaining twenty-four syllables in this song are each sung on one note only. Occasionally, in some songs, a syllable occupies three notes and, in some cases of ornamentation, four; but more have not been found.

It is usual, however, for a single syllable to occupy only one metric unit or beat in the music; this means that most of the syllables have the same duration, and thus that if one of them occupies two notes, those notes are half of the length of a single note which takes up an entire syllable. Again using Fig. 51 as an example, thirty of the syllables occupy an eighth-note or its equivaient while four take up less, four more than an eighth note; this is the usual picture. As in Fig. 51, syllables are likely to take up more length (or time) at the end of a phrase or song, and less length immediately before this final position. This fits in with the phenomenon of final lengthening which is widespread in music throughout the world.

In many song we find a similar phenomenon in the relationship between words and musical units. In Fig. 26, for example, there is a strong correlation between the word and the musical measure, these two units coinciding in length. In Fig. 27, a word tends to take up half a measure. Although there are many exceptions, it is possible to see the picture of the relationships in length between individual words and musical units by considering figures 26 and 27. Words of two syllables in an individual song usually correspond to notes of uniform length, always excepting the final position, where the notes are frequently lengthened to twice the expected length. In terms of actual duration, three-syllable words are usually of the same length as two-syllable words; one-syllable words are usually half the length of two-syllable words, but longer words which follow the monosyllabic ones tend to be longer than they would ordinarily be, in order to make up for the time gained by the short word; four-syllable words tend to be twice as long as two and three-syllable words. It is evident that musical units of equal length, most commonly whole and half measures, correlate strongly with what appear to be the backbone of the texts — the two-syllable and three-syllable words. 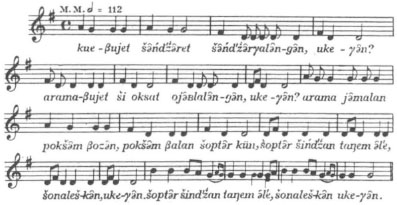 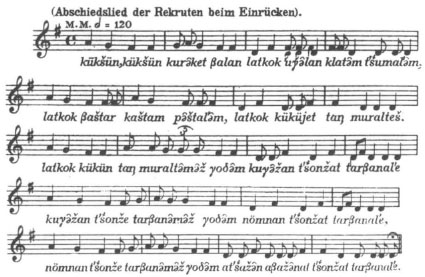 For a study of the relationships between stress, length, and pitch movement in the song-texts (as they were spoken, not sung) and the analogous features in the music, largely negative results must be reported. Although intonation in the language has not been studied in sufficient detail, it is evident that ascending and descending contours are linguistically significant.

An attempt was made to study the degree to which these contours are reflected in the melodic contours of the songs sung by informant Jewskij. The results of this investigation are relatively insignificant. There seems to be no relationship between the words and the music at this level. About a third of the instances indicated parallel movement in the musical and verbal contours, and in another third the music did not change pitch. In order to illustrate the relationship of contours, Fig. 54, p. 97, is marked, ascending verbal contours by “1” and descending ones by “2” (according to the practice of Sleator and Yegerlehner).

Cheremis vocal music is monophonie, except for one isolated example (Fig. 25) in the songs, a recent introduction. Polyphony is found otherwise only in instrumental music. The latter is quite separate in style from the vocal material in most features except scale. The minor Cheremis style is contrastive, again, in all elements of music except scale, and is possibly a recent introduction among the Cheremis.