There is evidence that the Cheremis folk song style has undergone some changes since the establishment of the Soviet Union. The fact that new words have been superimposed on old tunes, that an attempt has been made to create a new kind of Soviet folklore, is well known. Strictly musical changes have not been recognized in the literature to any great degree, but they too seem to have come about. Many of the songs with Soviet texts, however, have melodies in the principal, and presumably older, style.

The most recent of the large sources used in this study, Četkarev, is evidently representative of the kind of folk music current among the Cheremis in recent years. It contains a number of items labeled “Soviet folk songs,” which consist of patriotic material; in the other songs, items of Soviet culture also appear frequently. The tunes, however, are often said by the authors to be part of the old (i.e., pre-Soviet) Cheremis repertory, or at least in an older Cheremis style. Yet there are some marked differences between these songs, as found in Četkarev, and the presumably older repertory, as presented by Lach, Vasil’ev, and in other older sources. The older repertory has been described in Sec. 2, preceding; some of the differences between it and the recent material are of interest here.

Most obvious among these differences is the greater variety of materials in the minor style. Songs in the style of the older collections are present in considerable number, to be sure, in Četkarev. But styles which were not found there, and which exceed the older style in complexity, are also abundant. Some of these seem to be intrusions from other cultures, possibly Uralic, Russian, or Tatar. Others again may have been developed from the old Cheremis style by individuals who, having had contact with the more complex and diverse music of the West, tried to introduce more variety and perhaps greater expressiveness into the Cheremis repertory, whose homogeneity heretofore had been remarkable.

The melodic material in the songs which differ from the old style tends to diverge from that of the more traditional songs in only a small degree. The scales are usually pentatonic, with minor thirds and major seconds. The ranges are in the vicinity of an octave. The melodic intervals do not differ in quantity or quality from those in the principal style.

The greatest differences are evident in the rhythmic and structural aspects of the songs. The secondary Cheremis style has greater rhythmic complexity manifested in various ways. Meters are more complex. There are frequent changes of meter, as in Fig. 20-25 at end of Chap. 3. where 6/8, 7/8, and 9/8 meters appear in one song. The use of two or three different metric units is not uncommon in this newer material. Such metric diversity seems to be the result of the singers’ practice of lengthening notes for expressive purposes. Whereas, in the dominant style, the meters progress rigidly, a greater degree of flexibility is evident in the newer material. Although direct evidence is lacking, it seems likely that more variety in the rhythmic interpretation of a single song is possible in the later material than in that of the older collections.

The use of larger numbers of durational values is also characteristic of many songs in the secondary style. Whereas the older songs make use of two or three, usually in the ratio of 1:2:4, the newer songs often make use of six or seven different lengths of notes, and these lengths are often related by rather complex ratios. The use of triplets along with duple divisions is frequent; very long and very short notes are found side by side. There is a good deal of ornamentation, an abundance of short, melismatic passages (Fig. 21).

The over-all form of these songs is in a few cases quite different from that in the older collections. We find more reverting forms which use alternation of contrasting phrases, similar to those in Western European folk music, like the following:

But most of the newer-style songs use the same principles as the older songs, namely, repetition and transposition.

The songs on pp. 54 and 58 of Četkarev (Figures 21 and 24, pp. 48, 51) are laments, and the accompanying notes indicate that their ornamented, rhythmically complex, and rhapsodic quality is typical of laments. They fit in with the style of the newer songs indicated above. The statement in Četkarev’s notes, indicating that these songs are in the style of old Cheremis laments (although dealing with Lenin), is not corroborated by the older collections of Cheremis songs.

Polyphonic singing appears in Fig. 25. While this is obviously an isolated example, it is of interest because its melody (the lower of the two voices) is a typical old Cheremis tune, while the style of polyphony, the relationship between the voices, is in the style of Russian and Ukrainian folk polyphony. This is manifested especially in the parallel fifths towards the end of the song. Evidently the Cheremis have begun to sing polyphonic ally, in choruses, and the Russian style of folk polyphony has been selected for this kind of singing rather than the Western European system of harmony, which prevails in the polyphonic accordion music.

If it is indeed correct that recent origin explains the divergence of the secondary style from the principal style, in which most of the Cheremis songs are composed, it appears likely that the secondary style is part of a new Soviet style, introduced in recent decades, and common to several or many of the ethnic groups in the Soviet Union. The Bol’šaja Sovetskaja Ènciklopēdija, p. 150, states that, since the advent of the Soviet Union, there has been much mutual interchange of material among the various folk music styles. New traits are appearing; the simple, pentatonic systems are giving way to newer and more complex ones; rhythms are increasing in complexity; etc. Old songs are being supplied with new, more modern, features. More “artistic creations” are taking the place of the old folk songs, and archaic styles are dying out. In addition, however, old melodies are being kept alive in combination with new Soviet words.

Sokolov, p. 657, indicates the same situation, namely, that musicians have observed significant changes in the whole musical structure of Russian folk music, especially in the relationship of words, music, and instrumental accompaniment. Thus the postulation of a new Soviet style, though certainly not documented to a satisfactory extent, seems a reasonable explanation for the existence of the minor Cheremis style, a style which is not present in the old collections. The sources of this style may be diverse, but it is probable, in view of the polyphony, that elements of Russian folk music have played a part of some importance. 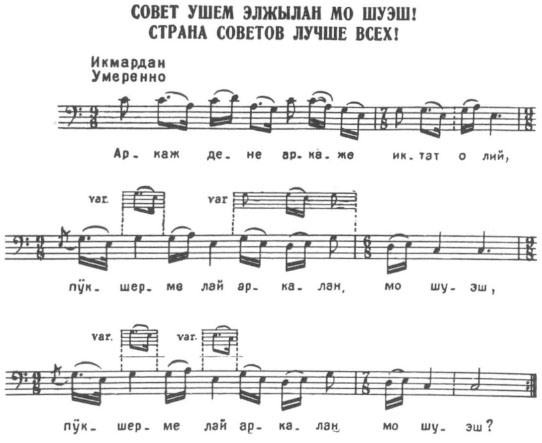 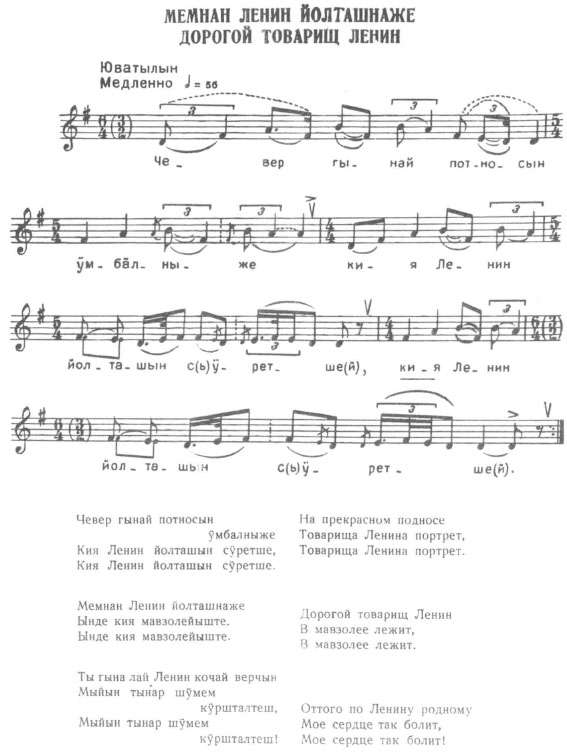 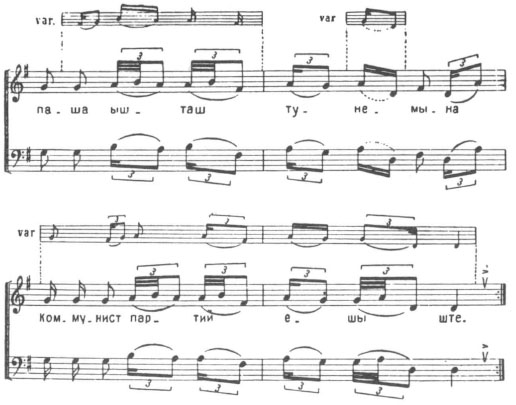 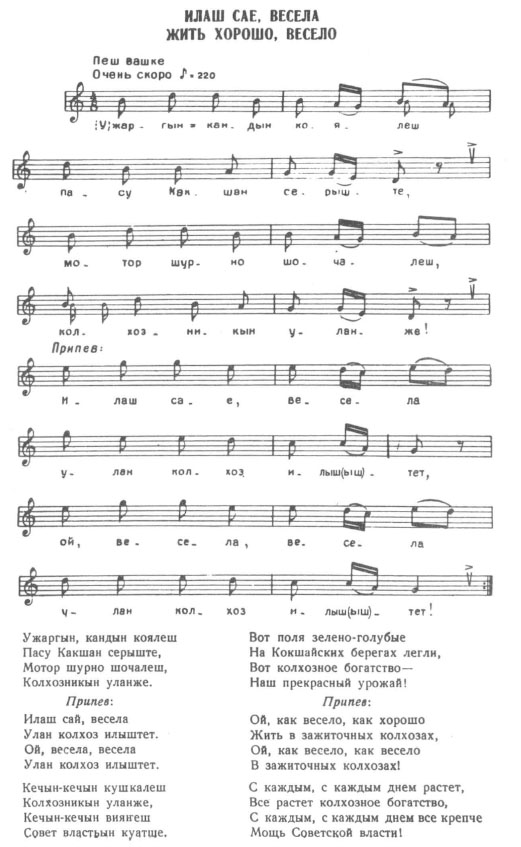 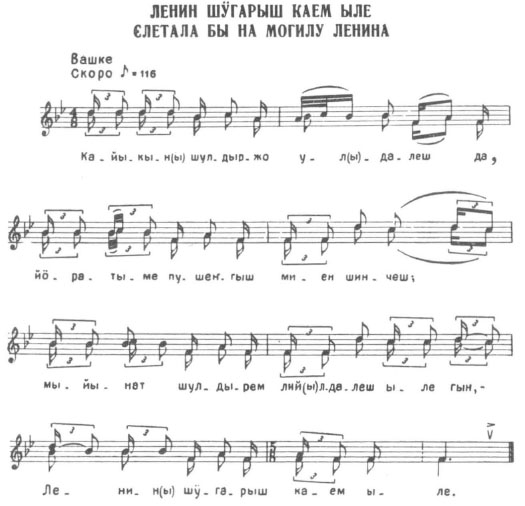 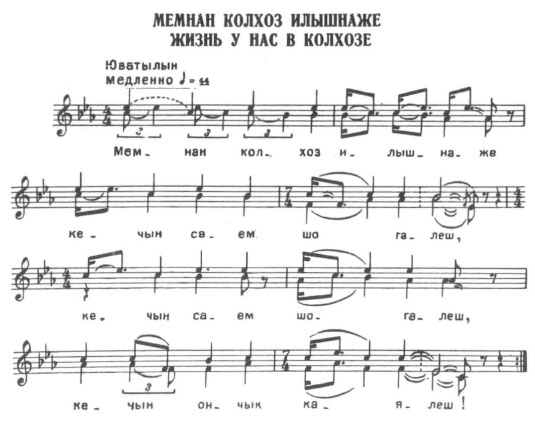