Women and even girls enjoy the greatest liberty here. It seems to me that when Lafayette came to fight for the freedom of America he had only women in view, for they alone are really free in free America.

My collaborators Meilhac and Halévy say in La Vie Parisienne that only the Parisian women know how to go out walking. They have not seen the American women going and coming, strolling, watching out for the carriages, lifting the hem of their dresses with a coquettish gesture and uncovering exquisite legs with unique art. One must admit that there probably exist no more seductive women in the world than the Americans. In the first place, many more of them are beautiful than in Paris—of a hundred women passing by, ninety are ravishing. Besides they know how to dress. They wear gowns in perfect taste, tactful, truly elegant. One would say that they had been made by Worth.

There is only one thing which I would criticize about their costume, and that is a pocket placed at knee height, hanging where the purse of medieval ladies used to hang. This pocket is designed exclusively for a handkerchief, but from a distance, when a bit of white linen shows at this opening, you ask yourself if the beautiful lady had not been the victim of an accident, and if it is not a very intimate garment which you perceive through a tear in her skirt. All of the American women one meets carry their pocketbooks clasped in their hands, so that the pickpocket—for there are just as many in New York as in Paris—will not have the indecent temptation to fumble in their pockets.

At the noon hour you can see girls going quite alone into elegant restaurants and tranquilly lunching with as little concern as an old European bachelor. Others wait at the corner of Fifth Avenue or elsewhere for the carriages they have called to go driving in Central Park.

One strange thing for the depraved Parisian male, who likes to follow women around, is that nobody in New York or any other city in the United States would take the liberty of following a young Yankee woman and still less of talking to her even to offer his umbrella. To have the privilege of being able to offer her this object, either with or without your heart, you must be presented or introduced, as they say. But don’t think that the formalities of introduction are very terrible or very difficult of fulfillment. If you don’t have a mutual friend or relative, a want ad in the Herald will be sufficient. 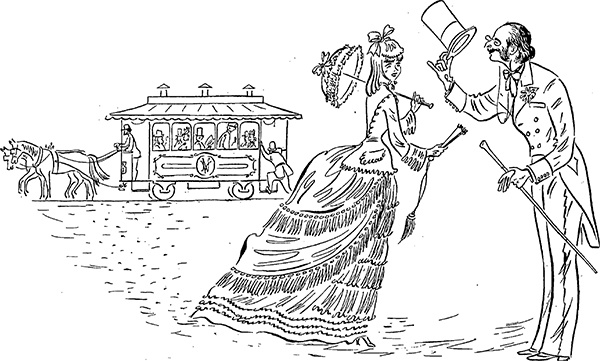 Just a moment ago I mentioned Central Park. This promenade is the rendezvous of elegant society. But it resembles in no way our Bois de Boulogne. A broad, rocky meadow, skillfully concealed by green turf carefully maintained, a few clumps of fine trees, one or two ponds, and magnificent drives—this is Central Park. Every day one can see a parade of carriages more numerous than at an Italian corso. And what vehicles! The New York carriage makers seem to have exercised all their ingenuity to invent strange conveyances which one can divide more or less into two principal types. One, extremely heavy, is a kind of a coach from the Middle Ages, a massive carriage, a monster berline where many people can be seated very comfortably. But how ugly and how unbeautiful these rolling houses are! In the body of the vehicle is a large rear window furnished with a curtain which, always flying in the breeze, makes them still more unpleasing. The other type is on the contrary almost unbelievably light. It consists of a tiny box, with or without a hood, on which one or two people at the most can sit, riding on four large wheels so thin, so frail that they make the vehicle look like an immense daddy longlegs. These buggies, as they are called; often have their hoods raised, but since the top is open on all sides, it always seems to be flapping in rags and gives to the ensemble a most poverty-stricken aspect. It is not unusual to see girls of the highest society driving two vigorous horses hitched to this light vehicle.

The first time I saw the Park, it was in the company of an American man well known in New York. At every step he met a friend. I noticed that he bowed very low to some people, while to others, he barely touched the edge of his hat. I asked him for an explanation.

He answered very seriously, “The gentleman I have just greeted so respectfully is very well established in New York society; he is worth a million dollars. This other passing now is worth only a hundred thousand, and in addition, he is less well regarded than the preceding one, I greet him with less ceremony.” Such are the shades of etiquette one observes in America, where work and the dollar determine the only aristocracy.

The Story of Two Statues