The Influence of the Guitar on Spanish Keyboard Music

“The natural musical feeling of the Spaniard is based on the technique of the guitar, and this has been so ever since the beginning of Spanish instrumental music.”1 Certainly no other instrument has had more influence on a nation’s musical development.

There are two basic methods of playing the guitar, rasgueado and punteado. Rasgueado refers to repeated strummed chords. All five or six notes of the chord are seldom changed at once, and those that are retained to steady the hand produce an internal pedal point. Punteado refers to notes played in succession. As we shall see, the natural tuning of the open strings of the guitar (E-A-D-G-B-E) also has an influence on Spanish keyboard music.

Since the guitar was already a popular instrument in eighteenth-century Spain, it is understandable that Scarlatti should reflect some of its basic techniques in his numerous sonatas. In the words of Ralph Kirkpatrick, “As far as we know, Scarlatti never played the guitar, but surely no composer fell more deeply under its spell."2 One of the most prominent guitar techniques used by Scarlatti is the internal pedal point. A clear example of this technique can be seen in the excerpt from Sonata K. 26/L. 368 shown in Ex. I. Compare it with Ex. 2, taken from Albéniz’s popular “Leyenda” (Suite Española). Note the wide-spaced hand-crossings in the Scarlatti and the very close finger-crossings in the Albéniz. Both contain internal pedal points. Albéniz’s “Leyenda” has enjoyed popularity not only as a work for piano but also in arrangements for guitar and for marimba. 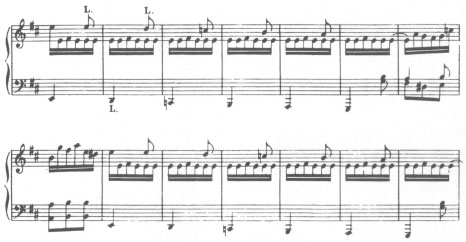 Passages that are strongly reminiscent of the style of the early Spanish guitar are to be found throughout Scarlatti’s sonatas. Gilbert Chase finds the most striking example to be Sonata K. 460/L. 324, “especially m. 14 onward, which is absolutely in the punteado style, and again from mm. 27-30, in which the combination of arpeggio chords and single detached notes, and the typical cadence, might have stemmed directly from any of the old guitar books.”3 Further evidence of guitar technique can be seen when Scarlatti builds chords by fourths (guitar tuning) instead of thirds, for example in Sonata K. 64/L. 58.

The characteristic dissonances (especially acciaccature) in Scarlatti’s harpsichord sonatas seem to imitate the sound of the hand striking the belly of the guitar, or as Kirkpatrick puts it, “savage chords that at times almost threaten to rip the strings from the instrument.”4 A most telling illustration of this technique can be seen in Sonata K. 215/L. 323 (Ex. 3). Kirkpatrick adds that the harmonic structure of passages such as this, which imitate the guitar, seems to be determined by its open strings and by its suitability for modal Spanish folk music. To go a step further, Sonata K. 17/L. 384 may be compared with Albéniz’s “El Albaicín,” from Iberia. As Chase observes, “Both utilize the characteristic interval of the fourth in rapid ‘plucked note’ effects with brusque rhythmic punctuations, and with chromatic inflections peculiar to Andalusian folk music.”5 The setting is not unlike that of Falla’s “Andaluza,” from Cuatro piezas españolas, which suggests the plucked notes of a guitar at times, with pungent resounding chords accompanying a hypothetical cante hondo singer.6

Curiously enough, native Spanish composers of the eighteenth century did not show an overwhelming predilection for emulating the guitar in their keyboard works. Perhaps they considered such “gypsy music” vulgar. However, Scarlatti, a foreigner, came first to Andalusia with Maria Barbara and was, no doubt, influenced by the exotic sounds that he heard there.

In the early nineteenth century in Spain Italian opera reigned supreme, and Spanish composers of piano music contributed only light salon music and fantasies on operatic themes or continued the style galant. Naturally, guitar techniques were not generally needed in this setting. However, with Albéniz, Granados, Falla, and Tbrina, in the late nineteenth and early twentieth centuries, there was a revival of Spanish keyboard music. Guitar effects permeate the piano works of these composers and reflect the Spanish nationalistic spirit.

Guitar effects abound in the piano music of Turina.7 Examples of sonorities based on the tuning of the guitar can be found in “Zambra,” from Cinco danzas gitanas, Op. 55; “Zarabanda,” from the Partita en do, Op. 57; and “La mocita del barrio,” from Mujeres de Sevilla, Op. 89. These inherently quartal structures are used in strikingly different ways in these pieces. The approach in “Zambra” is strong, rhythmic, and percussive, employing a combination of the rasgueado and punteado techniques (Ex. 4). In “La mocita del barrio” the chords, which reproduce the open strings of the guitar exactly (E-A-D-G-B-E), help create a lyrical, languid atmosphere (Ex. 5).

The technique of fast repeated chords on the guitar is relatively simple compared with the same technique on the piano. On the guitar, it is a matter of strumming the hand down and up, the sonority being achieved with both strokes. On the piano, the sound occurs only on the downward movement, so that the hand must be lifted constantly. If one is not careful, this action can result in semi-paralysis, or a “clutched” feeling, preventing the performer from articulating the passage clearly. Thus, what is comparatively simple on the guitar becomes difficult when transferred to the piano. Tbrina’s “Generalife,” from Cinco danzas gitanas, Op. 55, affords an example of this pianistic problem (see Ex. 6).

Turina makes specific reference to the guitar in only two works for piano, Prelude No. 4 (from Preludios, Op. 80) and Rincón mágico, Op. 97. In the former he indicates como una guitarra beneath a rhythmically accented bass line. One immediately thinks of the brilliant, strong thumb technique (pulgado) used by many flamenco guitarists for lower lines of this type (see Ex. 7). In a similar case, Debussy indicates a guitar-like effect by writing “quasi guitarra” at the beginning of his prelude La sérénade interrompue. Granados also was interested in emulating the low, rich tones of the guitar in his “Coloquio en la reja,” from Goyescas. A footnote at the opening of this work reads, “Toutes les basses imitant la guitare.” In the first movement of Tbrina’s descriptive sonata Rincón mágico, Op. 97, a theme and variations, the composer asks for a guitar effect by entitling Variation I “Regino y la guitarra.” Amidst typical guitar rhythms and chords, Tbrina employs the exact intervals of guitar tuning in arpeggios. In a similar way, Granados ends Goyescas with an arpeggiated sonority based on the open strings of the guitar (see Ex. 8).

Two striking examples of the brusque, savage use of rasgueado and punteado effects in Spanish piano music can be seen in Albéniz’s “El Puerto,” from Iberia (Ex. 9) and Falla’s “Andaluza,” from Cuatro piezas españolas (Ex. 2 in chapter 3). The intentions of the composers are extremely clear. Albéniz marks his passage rudement marqué et bien sec and Falla marks his très rhythmé et avec un sentiment sauvage. Both examples are replete with accent marks and dynamics of fortissimo. By his telling use of dissonance, Falla enhances the effect of his work with chords that almost sound metallic. But Falla seems to go a step further in his Fantasia bética (Ex. 5 in chapter 3), where he combines guitar effects with even more modern tendencies. In the words of John Trend, it “possibly represents the farthest that Falla has gone in adapting the harmonic peculiarities of the guitar to the modern pianoforte.”8 Trend also adds that Falla’s Fantasía bética makes an interesting comparison with his Homenaje in memory of Debussy, which was originally written for guitar and then arranged for piano by the composer. 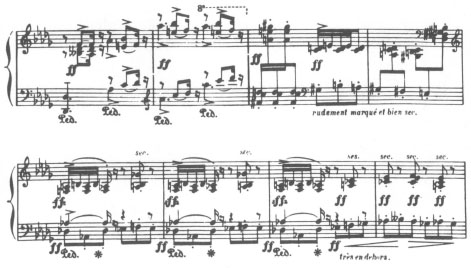 Thus, the spirit of the guitar and its effects play a vital role in Spanish piano music and its technique. Pianists, especially those who are not Spanish, should constantly remember that at the back of many Spanish composers’ minds there is often a plucked instrument, the guitar, the chords of which sometimes give the effect of an appoggiatura and add a vital pulse to the rhythm. This wedding of the two instruments has been described by Joaquin Rodrigo in a most unusual way. He describes the ideal guitar dreamt of by Spanish composers as “a strange, fantastic, multiform instrument which has the wings of the harp, the tail of the piano, and the soul of a guitar.”9

Though some Spanish composers of piano music after Manuel de Falla have been influenced by the guitar and its techniques, the more progressive ones have chosen to steer clear of sonorities that immediately remind one of folk elements. The more recent composers generally prefer a trend toward universalizai ion; consequently the guitar has not figured as prominently in the music of Spain since World War II.

A History of Spanish Piano Music